OP-ED: Women Who Support Trump are Anti-Woman (Among Other Things) 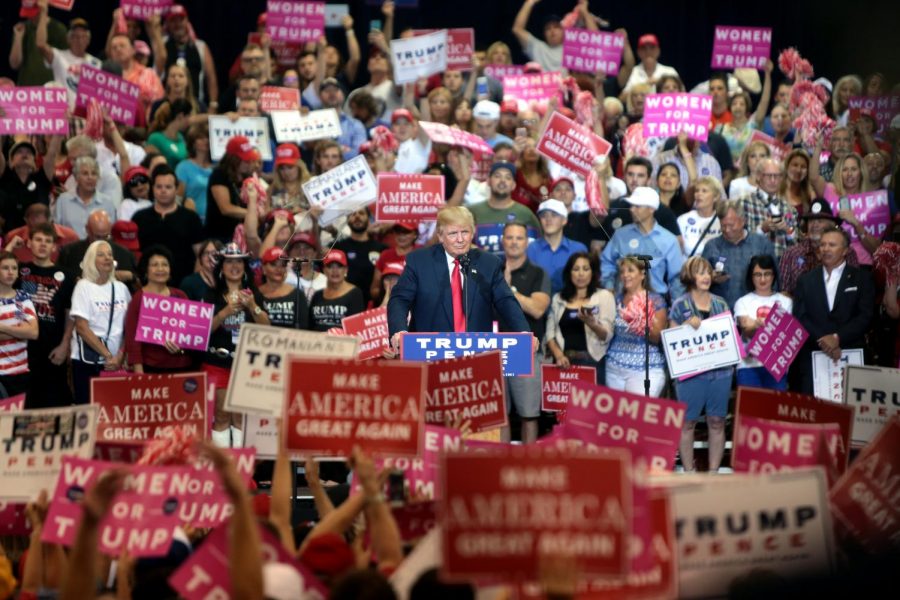 President Donald Trump has both explicitly and implicitly displayed misogynistic behavior and attitudes for decades. He has repeatedly degraded women who challenge him by describing them with words like “aggressive,” “nasty,” “pigs,” and “disgusting animals.”

Moreover, he has been accused of sexual assault or harassment by 26 women since the 1970s. Trump has denied these allegations but has done so with comments such as “she would not be my first choice,” absurdly insinuating that the women were not worthy of being assaulted by him. Beyond that, it demonstrates his failure to recognize that sexual assault is not defined by attraction but rather by an exertion of power and control.

Some harmful policies under the Trump Administration have included removing Obama-era protections for victims of on-campus sexual assault and accountability measures for universities to uphold victims’ rights, disbanding the White House Council on Women and Girls that had functioned to coordinate with women’s rights groups to implement policies and programs to advocate for gender equality, and halting the Lilly Ledbetter Fair Pay Act of 2009 that had aimed to narrow the gender pay gap.

Despite these anti-woman policies, about 42% of women voted for Trump in the 2020 presidential election, according to exit polls. Therefore, by no means should women be characterized or subjugated as a monolithic voting bloc. There are certainly “single-issue” voters among women who align themselves with the GOP solely to advance their views on a specific issue such as taxes, gun rights, abortion, or federal judges.

However, as Trump blatantly expresses abusive rhetoric and beliefs so fundamentally anti-woman, it still raises the question as to why there are women who support him. Whether it’s the product of internalized misogyny, economic anxiety, or “White panic” in an increasingly more diverse nation, there is obviously not a singular explanation to this multifaceted question.

Although it seems counterproductive to gender equality, women supporting innately anti-woman policies is not a new concept. During the 1970s, the Equal Rights Amendment, which proposed a constitutional amendment guaranteeing the “equality of rights….on the account of sex” failed to pass. One of the leading voices opposing its passage was the late and infamous Phyllis Schlafly who feared the loss of the traditional role of a woman as a wife and mother.

A more current example of an anti-woman woman includes Tennessee’s very own Sen. Marsha Blackburn (R-TN) who voted against both the Lilly Ledbetter Fair Pay Act of 2009 and the Violence Against Women Reauthorization Act of 2013.

Laura Moran and Robin Ely of the Harvard Business School provide an explanation as to why there exist women who have historically and still oppose policies that establish equality. In their jointly published article, the authors detail the way “The Trump campaign tapped into fears and frustrations among [W]hite working-class women about diminished possibilities for their husbands and sons to provide for their families.”

The mystery of women’s support for Trump, synonymous with being anti-woman in terms of both rhetoric and policy, does originate largely from White women, as exit polls place Trump with having won 55% of their vote during the 2020 presidential election. On the other hand, Black women continue to be an underappreciated backbone of the entire Democratic Party that President-elect Joe Biden and Democrats should be grateful for.

In accordance with these voting patterns, a study conducted by researchers Erin C. Cassese and Tiffany D. Barnes concludes that White women who voted for Trump, especially among those who didn’t have a college education, were more likely to exhibit “hostile sexism,” which they attribute to “[W]hite women endors[ing] traditional and even sexist views in order to maintain the privilege associated with [W]hiteness.”

Even among the White women who do acknowledge that Trump is a morally flawed individual, those who voted for him still ultimately chose to overlook his misogynistic leanings, remaining complicit to perpetuating his anti-equality agenda.

While these sentiments are by no means reflective of all White women, we must recognize that this is a huge voting bloc of women who are keeping other women–especially women of color–from reaching racial, gender, and economic equality.

While exit polls report Biden won 57% of the total women vote during this last election, there is still a large sector of our society that is caving into Trump’s populist callings to turn back the clock. Trumpism is actively holding the country back from achieving necessary progress towards dismantling injustices in this nation that has always existed but that Trump has further inflamed through his personal conduct and policy positions.

Breaking out of traditional confines in regards to race or gender is surely difficult or uncomfortable, but choosing to be oblivious to your privilege in the wake of inequality is truly harmful. After all, to invoke the words of the great James Baldwin, “it is the innocence which constitutes the crime.”