Why You Should Care About Bolivia’s 2020 General Election 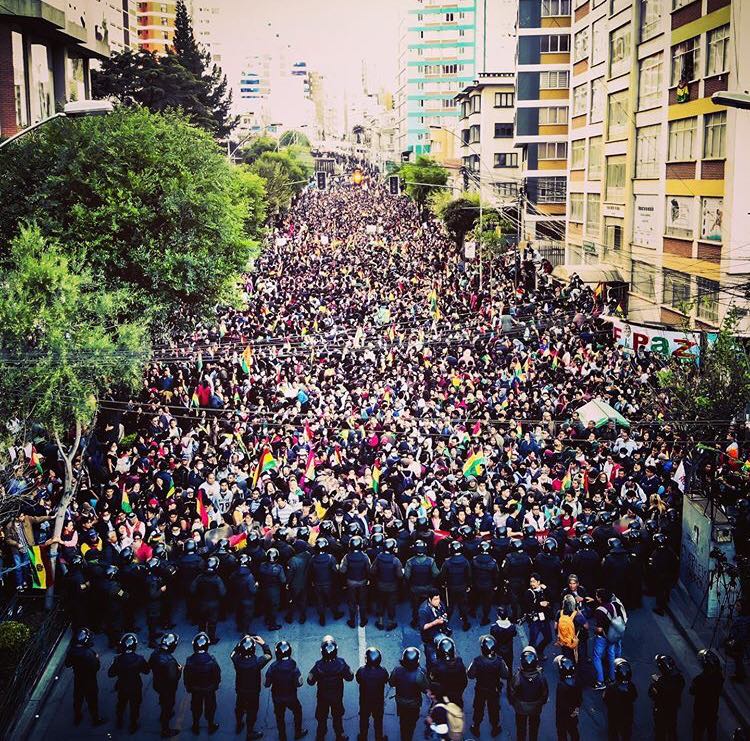 Protestors in La Paz, Bolivia during the 2019 political crisis.

On Nov. 8, Luis Arce of the Movimiento al Socialismo Party (MAS) was inaugurated as the new president of Bolivia, almost a year after a right-wing military coup usurped former MAS president Evo Morales.

Bolivians voted for Arce with over 55.1% of the vote on Oct. 18. The country’s presidential election functions in two parts: a first round vote, followed by a runoff vote between the top two candidates in the absence of a simple majority or a ten-point lead. With a remarkable 55.1% of the electorate, Arce was able to supersede the runoff vote entirely.

Morales, the first Indigenous president of Bolivia, was forced to resign  on Nov. 10, 2019 after weeks of nationwide chaos following the disputed results of the general election. Ironically, the instigators of the coup against Morales did not dispute the fact that he received a plurality of the votes; instead, they claimed that he did not win by enough to avoid a runoff. In the official results, Morales received 47.08% of the votes, compared to Carlos Mesa of the center-right party Comunidad Ciudadana who received 36.51%.

The main evidence for the coup came from a now-debunked report by the Organization of American States (OAS), a United States-based organization, that alleged discrepancies in the vote counting. Following Morales’s resignation, President Donald Trump released a statement praising the resignation of Morales as a “significant moment for democracy in the Western Hemisphere.” Morales had previously won three undisputed elections dating back to 2005.

Morales proposed a 2016 referendum to increase the term limits on the presidency and allow him to run for a fourth term. The referendum lost by a 49% to 51% margin, but the issue was taken to the Bolivian Supreme Court which decided that term limits were unconstitutional, opening the door for Morales’s 2019 candidacy. Many Western news outlets accused Morales of trying to become a dictator by abolishing term limits. However, the Bolivian Supreme Court possesses the same legitimacy that the United States Supreme Court possesses for Americans.

Following Morales’s resignation, Jeanine Añez of the right-wing Democrat Social Movement declared herself the interim president until the next election, despite her party receiving only 4.24% of the vote in the general election. Añez and Luis Fernando Camacho, a candidate in the 2020 election for the far-right Creemos party, entered the government palace holding a bible, declaring that “the Bible has returned to the Bolivian Government.” This was a racially-charged message against the traditions of the Indigenous plurality in Bolivia.

During the tenure of the illegitimate Añez government, the Bolivian government criminalized the MAS party, violently massacred protestors, and delayed the election multiple times. The original election was scheduled in May, before being delayed to Sept. and then Oct. It took a general strike and road blockades organized by labor unions and Indigenous activists to guarantee the Oct. 18 election. During this whole period, Bolivia has been devastated by the Covid-19 pandemic, which the government has failed to adequately address due to political instability. In Apr., Añez took a $327 million IMF loan for Covid-related assistance, a debt that will no doubt devastate the country’s economy for years to come.

Arce’s win is a victory for democracy everywhere. Camacho, who led the coup and received 14.0% of the 2020 vote, was the vice president of the Santa Cruz Youth Union, a fascist paramilitary organization. Bolivia is a case study on the effectiveness of organization and collective action in protecting democracy from fascism.