Tea Partyists to Trumpists – The Evolution of the Far Right 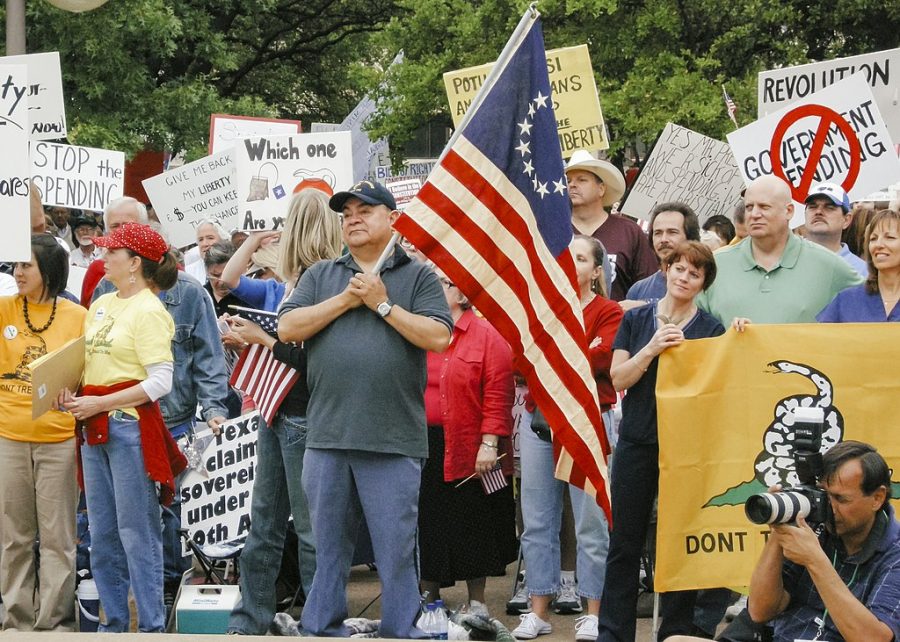 A conservative movement emerged in 2002 citing a need for lower taxes, a reduction in the national debt, and advocating for decreased government spending. It started as a website, USTeaParty.com, which was relatively unknown and never took off. However, this movement would go on to inextricably change the composition and orientation of Republican Party, as well as the landscape of American politics. This movement was called the Tea Party and while you may not have heard this name recently, the essence of this movement is alive and well in today’s “Trumpists.”

While the Tea Party’s emerging principles pertained mostly to the economy and fiscal conservatism, the group evolved over time. The Tea Party truly started to take off in 2009 with their first national protest against President Obama’s Homeowners Affordability and Stability Plan. At this point, The movement started to expand into social conservatism. It is often deduced that the Tea Party exploded from the election of President Obama and the Democratic majority in both the House and the Senate coupled with frustration from President George W. Bush’s signing of a $700 financial bailout. Others think that the party became divided over the “donor” and establishment members of the party blaming McCain’s loss on his vice-president pick Sarah Palin, who would later become a key figure in the Tea Party. This angered the working-class Republicans who tended to like Palin and her unprecedented tendency to behave differently than a typical politician. It is also likely that the movement would not have gained momentum if not for CNBC reporter Rick Santelli’s viral impassioned speech from the floor of the Chicago Mercantile Exchange detailing his frustrations with the newly-enacted stimulus and the Obama administration’s plan to rescue homeowners from bad mortgages. All in all, it was a perfect storm for a conservative-right group to emerge.

The first Tea Party protests gained massive amounts of support, which led prominent Republicans to capitalize on this newfound energy inside the Republican Party and throw funding to this new movement. Grassroots organizations also began to pop up all over the country, one of the largest being the Tea Party Patriots, which gained thousands of members in its Atlanta chapter within a matter of weeks after its founding. All the while, wages were stagnating, jobs were disappearing, President Obama was increasing government spending, Bernie Madoff was caught defrauding millions, among other factors crucial to the working middle class.

For a movement that started due to fiscal issues (the “Tea” in Tea Party standing for “Taxed Enough Already”) it quickly morphed into something different. The majority of those involved were not only fiscally, but also socially conservative. These social issues soon started to dominate the rhetoric of the Tea Party while the movement continued to expand at an exponential rate.

Candidates started to notice the rise in popularity of the Tea Party and the people it attracted. They were tired of establishment politicians, both Democrats and Republicans. During the 2010 midterm elections, Republican Tea Party candidates came out of the woodwork. The New York Times identified 138 candidates running for Congress that had the support of the Tea Party. Many of these tea party candidates were successful in winning primary elections against established republicans. For instance, Mike Lee, a Tea Party-backed candidate, defeated his Republican opponent Bob Bennett in the primary, who had served in the Senate since 1993.

Tea Party candidates and eventual Congressmen played to their audiences well. They propped up conservative social beliefs and tended to make statements that would earn them an “applause line” with their constituents. Some conservatives began to discuss that the 14th amendment should not protect the citizenship of children born on US soil to undocumented immigrant parents. This pleased the growing number of conservatives who were strongly against illegal immigration. Sharron Angle, Tea Party member and a member of the Nevada Assembly, once remarked, “You know, our Founding Fathers, they put that Second Amendment in there for a good reason and that was for the people to protect themselves…And in fact Thomas Jefferson said it’s good for a country to have a revolution every 20 years…I hope that’s not where we’re going, but… if this Congress keeps going the way it is, people are really looking toward those Second Amendment remedies… I’ll tell you the first thing we need to do is take Harry Reid [Senator from Nevada] out.” A remark that some have connected to a comment Donald Trump made in a rally in Wilmington, North Carolina where he said, “If she [Hillary Clinton] gets to pick her judges, nothing you can do, folks,” Mr. Trump said, as the crowd began to boo. He quickly added: “Although the Second Amendment people — maybe there is, I don’t know.”

Although many disagree on when the Tea Party “died” it was clear that the group lost its fire. This loss in momentum can largely be attributed to mismanagement of funds and other institutional problems, rather than a lack of people identifying with strict social conservatism. Enter Donald Trump. While the famous real estate mogul seemed the unlikely choice to connect with the blue-collar workers of the Tea Party, he did just that. His message of “America First” resonated with the populist movement whose members were growing increasingly frustrated with the rates of job loss. He also talked like a Tea Party candidate, making controversial statements and not apologizing. Like the origins of the Tea Party, Trump quickly grew into a popular candidate, scoring points with his future base by calling out other politicians and promising to “Make America Great Again”. At a Nashville straw poll during the campaign Trump remarked, “You know, people talk about the Tea Party, and you talk about marginalized? At least I have a microphone where I can fight back. You people don’t. The Tea Party people are incredible people. These are people who work hard and love the country and they get beat up all the time by the media.” The Nashville Tea Party was and still is an extremely active group, and still vocal in their ongoing support of the former president – recently posting on Twitter, “Donald Trump Fought For Us. Now It’s Our Turn.”

It is clear that Trump worked to court the Tea Party, but he did not just try to appeal to the movement by invoking its name in speeches, he appealed to the sentiments that pushed so many to join it. By tapping into the anger directed towards Washington establishment politics, Trump was able to pick up the votes and support of the Tea Party, in addition to others distrustful of the government. This ultimately expanded and united the far right under one person, creating what we know now and “Trumpists.” This coalition of extreme supporters, coupled with the lifelong Republican voters who could not fathom voting for Hillary Clinton, ultimately won him the election.

The evolution of the Tea Party movement within the Republican Party started as protests about taxes and grew so large and popular that it led to the election of a president. While Trump was, and still is, a big player in the world of Republican politics, the Tea Party and other far-right supporters were able to legitimize him through their votes in 2016. Without them, Trump would have just been another celebrity who tried, and failed, to win political office. Since Trump left office with few supporters in the mainstream political arena, it will be interesting to see if Trumpism will prevail, disappear, or reinvent itself once again.