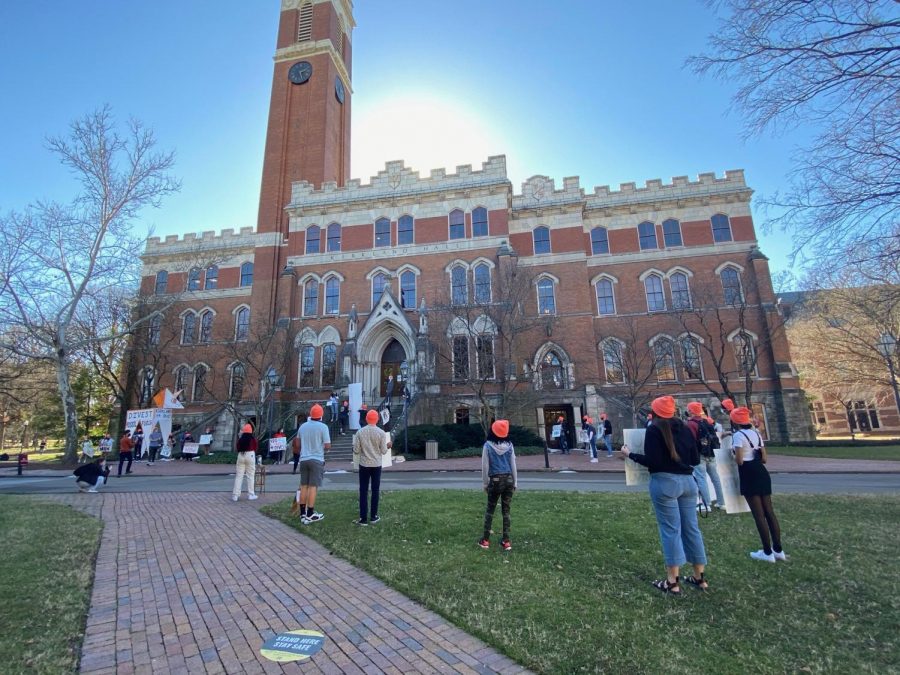 Student-led groups DivestVU and Dores Divest organized a socially-distanced protest outside of Kirkland Hall during the afternoon of Tuesday, Feb. 23.

DivestVU, a coalition of campus organizations, formed in the fall of 2020 to advocate for Vanderbilt’s immediate divestment from fossil fuels.  DivestVU is part of Fossil Free SEC, which unites universities across the Southeastern Conference in advocating for divestment.  The movement has been successful at other top-tier universities, including Yale, Columbia, Stanford, Georgetown, and Brown, which have already started or completed divestment from fossil fuels.

Dores Divest is another campus group organizing for immediate divestment, with a more disruption-centered approach.  On Jan. 25, the group sent a widely-disseminated email impersonating the Chancellor featuring “Handsome Ron” and actor Brian Baumgartner, who is known for his role as Kevin Malone on The Office.

Official DivestVU protesters, who wore orange beanies to distinguish themselves from others in the crowd, organized on Library Lawn starting at 1:30 p.m.  Half an hour later, the protesters marched in groups of eight (the University’s maximum social-distanced gathering number) towards Kirkland Hall.  The protesters chanted for the elimination of fossil fuels and played bagpipe music on a speaker as they carried a 14-foot tall orange unicorn, a cardboard cutout of Al Gore donning an orange beanie, and handmade posters.  The protest was organized in collaboration with Vanderbilt administrators and followed all Vanderbilt COVID-19 protocols.

Once the groups arrived at Kirkland circle, eight speakers took turns addressing the crowd on the steps of Kirkland Hall.  These speakers were Emily Irigoyen, Ember Tharpe, Miguel Moravec, Hannah Bruns, Ben Hayden, Ana Fonongava’inga Stringer, Gabby Guarna, and Shun Ahmed, and they featured groups such as Hidden ‘Dores, the Indigenous Scholars Organization, and Vanderbilt Student Government.  They began by recognizing that Vanderbilt is located on the indigenous land of the Cherokee and Sewanee people, who were forcibly removed in the 19th century.  The speakers emphasized the connection between climate change and racism, and asserted that Vanderbilt administrators were acting hypocritically by claiming they care for students of color while actively harming their communities by investing in fossil fuels.

Ember Tharpe, the speaker representing Hidden Dores, spoke about the role white racial comfort plays in downplaying the severity of environmental racism.  “I want Vanderbilt students to understand the interconnectivity between regular parts of their lives and the kinds of oppression that communities of color face,” Tharpe said in an interview with the Vanderbilt Political Review.  “There’s a lot of comfort at Vanderbilt, especially among white students, [who might think] ‘yeah, the way to be racist is to say the n-word’ or something like that, when really, white people are contributing to white supremacy and these systems every day.”

The Kirkland protest was one of many actions taken by DivestVU to push the administration to divest.  Miguel Moravec is a member of the Graduate Student Council who co-sponsored the DivestVU resolution that recently passed in the undergraduate Vanderbilt Student Government legislative body.  “We’ve already exhausted the democratic student constituent bodies,” Morovec said, “so we’re going to the faculty Senate next.”

Although this is the first protest organized by DivestVU, it will not be the last.  Shun Ahmed, Vanderbilt Student Body Vice President and one of the leaders of Tuesday’s protest, said more protests will happen in the future, and that interested students should reach out to the coalition via the DivestVU Instagram.  “We will go as far as we have to go [to get Vanderbilt to divest].  If it means constant communication [with administration], rallies every week, talking to the committee… we want to show the administration that students care,” Ahmed said.

“Climate change is a bigger issue than most imagine and it affects everyone and anyone you can think of.  If you don’t think this affects you, take a second glance because it definitely does.” Ahmed said.  “Take action where you can, speak up where you can, and if you don’t know how to, take the time to learn.”