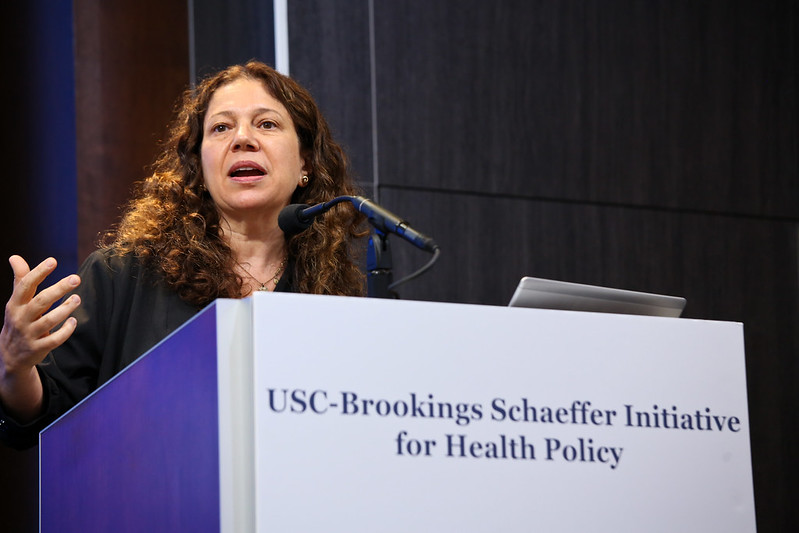 On Feb. 16, the Vanderbilt Economics Association invited Louise Sheiner, Senior Fellow in Economic Studies at Brookings Institute and policy director for the Hutchins Center on Fiscal and Monetary Policy, to speak on policymaking and fiscal debt. Scheiner offered an overview of the causes behind the projected increase in U.S. debt levels and argued that the most sustainable course for the federal budget is not to decrease spending or to raise taxes but to invest in the future.

The discussion was structured around the “Fiscal Ship,” a simulation game co-created by the Brookings Institute and Wilson Centre, two prominent think-tanks. Participants begin the simulation by deciding what the three core values of the government will be. Options include “Protect the Elderly,” “Strengthen National Defense,” “Shrink Government,” and a list of many others.

The next step is to select a combination of fiscal policies that will simultaneously achieve the chosen values and reduce future debt. The Fiscal Ship will successfully sail if both objectives are met. Placed into the shoes of policymakers, players gain insight into how the government spends its money and the difficult decisions the government must make in order to reconcile conflicting priorities.

Sheiner began the discussion by describing how the Fiscal Ship is currently operating, offering a breakdown of the Federal Government expenditure in 2019. Health programs occupied the largest proportion of fiscal spending, followed by Social Security, discretionary spending, and other mandatory spending. Polling suggests that this reality is somewhat at odds with public perception. For instance, people mistakenly believe that foreign aid contributes “a great deal” to national debt, when it is actually an extremely small share of spending compared to Social Security and Medicare.

Sheiner continued by showing the variation in the fiscal deficit across the past 50 years. Figures suggest that revenues and spending have bounced around without changing significantly, with the exception of spikes in spending due to the Great Recession and the current pandemic. For instance, the CARES Act increased the deficit by $2.3 trillion in 2020 and $1.3 trillion so far this year. Although spending is expected to stabilize after the vaccine roll-out and drop back to pre-2020 levels, the Congressional Budget Office (CBO) projected a steady long-term increase in spending as a percent of GDP. By 2050, it will reach the COVID-19 peak level once again.

This trend is partly due to an estimated higher elderly to working-age population ratio caused by increased retirements among the baby-boomer generation and families’ choices to have fewer kids. Scheiner explained that if the fertility rate stays down, which it likely will, the population will be forever older, with the ratio of parents to kids reflecting the ratio of elderly to working age people. The government will respond by increasing Social Security and Medicare spending.

Rising healthcare costs also contribute significantly to the projected increase in spending. According to Scheiner, the increase in healthcare costs is actually propelled by technological advancements as opposed to the common criticism of the healthcare system being overly inefficient and expensive. Since the public demands better technology, experts expect healthcare spending to continue rising as a share of GDP.

The long-term increase in the fiscal deficit, meanwhile, will translate into an accumulation of debt. According to the CBO, the current U.S. debt-to-GDP ratio is at slightly over 100% today and is projected to reach 200% by 2051. Scheiner detailed that by fiscal year 2048, the government will become a “big insurance program for older people,” allocating more and more of its spending towards health programs and Social Security.

After the discussion, Scheiner turned to the goal of the Fiscal Ship game in light of the current situation in the United States – is stabilizing debt the only sustainable course? Based on theory, debt is unsustainable. It not only crowds out current private investment but also requires increases in future taxes and spending cuts to pay interest on debt. Borrowing to finance current consumption, on the other hand, will lower future living standards because interest rates will rise and crowd out consumption. If this cycle continues indefinitely, the United States will lose credibility to borrow and to repay borrowed money.

Scheiner then challenged the view that projected debt must be lowered to current levels. She pointed out that interest rates have actually been falling for 30 years and are now very low. Whilst this is not necessarily a good thing, low interest rates relative to GDP growth indicates that in the short run, debt is not overly costly. The United States can rollover debt by borrowing more, though eventually, increased debt will lead to higher interest rates.

Scheiner proposed that what the government should do now is try to improve future living standards, rather than cutting back on spending or raising taxes. Borrowing to finance the future is sustainable because it has a high rate of return. This includes improving education, housing, health, infrastructure, and investing in climate change resilience, among other initiatives.

Before closing the discussion, each participant tried their hand at the game. In the process, players viewed arguments for and against the chosen policy as well as by how much spending would increase or decrease. Scheiner revealed that the most common set of values chosen by college students are investing in the future, reducing inequality, and fighting climate change.

Participants voiced that such policy choices are difficult to make: a series of spending cuts that reduce debt often does so by sacrificing the fulfillment of the three chosen values. Although the ultimate goal of sailing the Fiscal Ship is attainable in the simulation, the real world presents much less certainty.