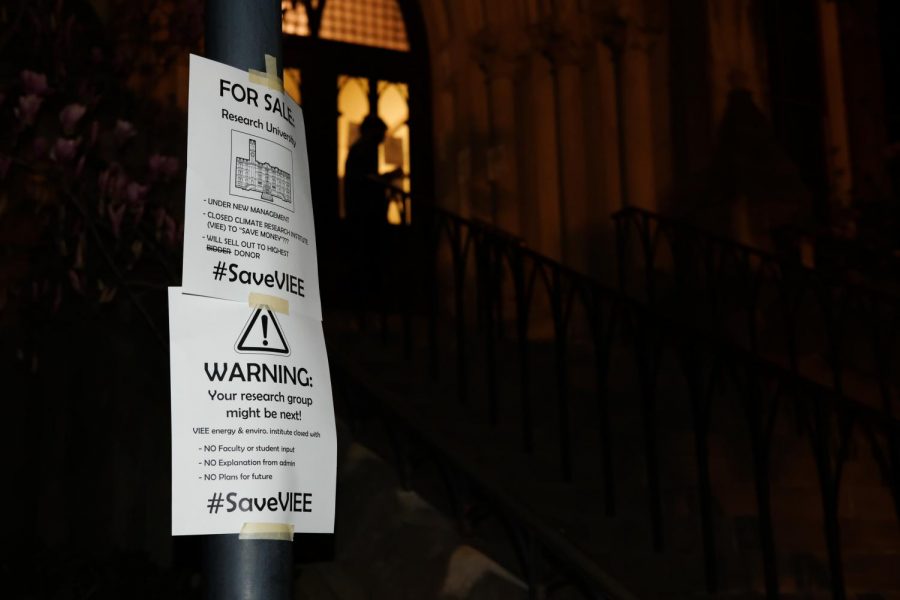 Students from Dores Divest met late in the night Sunday, Mar. 14, to post flyers in prominent areas around campus in response to a Vanderbilt Hustler article announcing that the Vanderbilt Institute for Energy and Environment (VIEE) would be permanently closing on June 30.

Dores Divest is a campus group demanding total divestment of Vanderbilt’s endowment from fossil fuels. They—along with DivestVU—organized the Feb. 23 protest outside of Kirkland Hall. DivestVU is a coalition of campus student organizations also formed to advocate for divestment. While both organizations have the same goal, Dores Divest has a more disruption centered approach, with past activities including sending students an email impersonating Chancellor Daniel Diermeier and hanging massive signs from Commons bridge calling on the university to “Divest Fossil Fuels.”

On Sunday, Dores Divest met outside of Rand and split into groups that posted three hundred flyers on Commons, Rand, Kirkland, Stevenson, and outside of the COVID-19 testing entrance at the Recreation and Wellness Center.

A leader in the Dores Divest movement who wished to remain anonymous told the Vanderbilt Political Review that “the fact that neither the students nor the faculty were consulted about VIEE being closed is inappropriate especially with the attention we’re giving to climate change right now.” This student said that the decision felt personal because “VIEE was the first group of faculty that actually spoke with the students about divestment.” Though VIEE never endorsed divestment, “they gave us the chance to be heard, which the administration has still never done.”

Ph.D candidate Kelsea Best expressed her concern over Vanderbilt’s decision to close the VIEE in a letter addressed to Chancellor Diermeier and Provost Wente. The letter included twenty co-signatures and sixteen testimonials from current and former students and faculty. The testimonials emphasized the cross disciplinary emphasis within VIEE. Dr. Alexander Maki, who is now an AAAS Science Policy Fellow working on energy policy in the federal government, wrote in his testimony that working in VIEE as a postdoctoral researcher gave him “the chance to collaborate with climate change experts from a wide range of backgrounds, including law and policy, economics, engineering, sociology, physics, and hydrology.”

Vice Provost for Research Padma Raghavan released a statement to the Vanderbilt Hustler saying the university was “launching a planning and envisioning process in consultation with university leadership, faculty, and students to map out our future trans-institutional strategy,” and emphasized that they were “committed to finding the best path forward so Vanderbilt can lead in addressing the critical challenges around global climate change, environment, and clean energy.”

To Dores Divest leaders, Vanderbilt’s claims future action fell flat. “To not even have a plan for the next step of the research initiative is irresponsible, and it’s really just lazy.”

“This past week Vanderbilt also announced that the business school is getting a fifty-five million dollar renovation, so they’re not hurting for money, they have a 7 billion dollar endowment—and even though they lost some money on that—they still have plenty,” said the Dores Divest student leader. Dores Divest has suggested that Vanderbilt’s investment in fossil fuels directly contributed to their endowment’s underperformance, as renewables greatly outperformed fossil fuels in 2020.

“The administration doesn’t seriously care about climate change beyond greenwashing,” the practice of conveying an environmentally friendly image without actually living up to the image created, “beyond what they post on their instagram, or committing to far off goals.”

“There needs to be more student energy before the administration will do anything,” said a freshman at the event. “Vanderbilt is deliberately moving away from the direction we want them to go, and that needs to change.”

As one of the most influential research institutions in the world, Vanderbilt’s commitment to specific research areas carries weight. When they decide to close the VIEE, they signal to other universities where their priorities lie. Vanderbilt can either lead in the fight against the existential crisis of climate change, or they can watch from the sidelines as forests burn and sea levels rise.