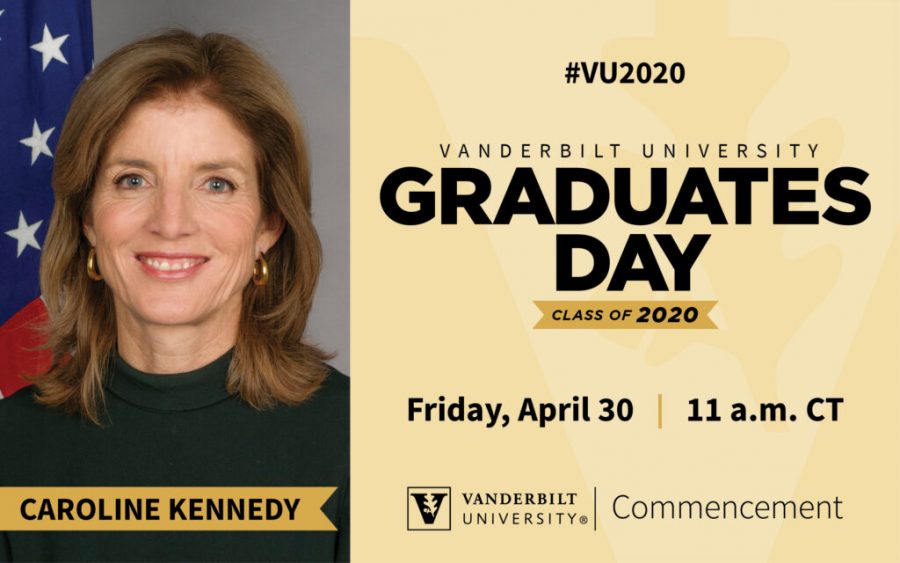 One year after COVID-19 forced the cancellation of commencement and its related festivities at Vanderbilt, the Class of 2020 finally received their long overdue Graduates Day address. On Apr. 30, Caroline Kennedy– the former Ambassador to Japan and daughter of President John F. Kennedy– spoke to the graduates and other attendees virtually. During her speech, Ambassador Kennedy urged the recent graduates to serve their country and bridge its internal divide.

After the opening remarks by Chancellor Daniel Diermeier, Provost Susan R. Wente, Alumni Association President Tim Warnock, and many student speakers, Ambassador Kennedy began her address by recognizing the resilience and sacrifices made by the Class of 2020 and their parents in response to COVID-19. When looking back on the past year, Ambassador Kennedy commented that the graduates learned more than they might realize, as they developed resilience and grew because of the global pandemic.

The big question posed to the graduates was what they will now do with the rest of their lives. Ambassador Kennedy said that they are the most educated generation in history, and she highlighted the words of her father during his address to Vanderbilt University in 1963. In President Kennedy’s speech, he addressed the crowd by speaking not of their rights as Americans but of their responsibility to be educated citizens, knowing that “knowledge is power” which requires one to support all citizens at all levels. The educated citizen, above all, is a “participant and not a spectator.”

Ambassador Kennedy outlined her own work as an active citizen in providing a valuable education, which she believes to be a moral duty. Too many children are not given the tools to succeed, and unfortunately, many of these students are black and brown. In order to tackle this issue, the Ambassador stressed that all people must indicate that they are here for marginalized communities and will do what they can to help everyone succeed, for when someone believes in another person, there is nothing that cannot be achieved.

The speech then focused on the role of the United States and the responsibility of its citizens. Ambassador Kennedy highlighted how America cannot remain the “indispensable nation” unless everyone feels a responsibility to keep the country true to its promises. Such promises are outlined in the Declaration of Independence, but those statements are only words unless every generation makes a commitment to uphold them. In today’s globalized society, we alone cannot solve problems like immigration and climate change. As such, we must learn to listen to other people and form cooperative partnerships with other nations.

To conclude, Ambassador Kennedy provided hope that healing the divide in our country is possible, but it will take hard work and desire. America is strong because of what we give, how we help, and how we serve, even when it might not be popular. Reconciliation is a process that requires sacrifice and trust, as evidenced by the once hostile relationship between the United States and Japan that has since grown into one of the most powerful alliances in the world. This, however, was only possible from educated citizens, who over the years created the pathway that leaders could follow. That is the purpose of active citizenship– taking small steps that allow us to move forward together. Ambassador Kennedy stressed that today, in our divided country, this is more important than ever.

The interview has been edited for content and clarity.

Asen: U.S. ambassadors are entrusted with promoting American interests abroad, oftentimes working with a country whose interests do not always align with those of the United States. How did you manage to work through such differences in Japan, and can those strategies help in lowering the division within our own country?

Ambassador Kennedy: I think the role of the ambassador in the 21st century is different than that in the past, and what I really found was that you are the person that is communicating and representing two very different cultures to each other. Sometimes you end up advocating or explaining your own host country back in Washington, and you’re always obviously advocating for the United States in your host country. There are so many countries around the world, and I think what I really saw was how strong and powerful our United States is– we really are the “indispensable nation”– but we have a lot of credibility to regain, and I think that our alliances and partnerships around the world and our ability to work with countries who are not as strong and powerful as us is really going to test us going forward.

We have so much strength and so much history and such a talented population, we have people here from all over the world, so I think people at places like Vanderbilt have a great advantage in being able to work in their own communities with people from around the world– no matter where you live in this county– and that teaches great lessons.

Asen: In an earlier interview, you expressed your admiration for your father, President Kennedy, having inspired service and leadership in the American people. What do you hope your ongoing legacy has inspired?

Ambassador Kennedy: I’ve really tried to carry forward the values of my family legacy, and I think service certainly goes back to the very beginning. My father obviously served in the war, but as President he’s best known for his challenge for everyone to give back to our country in some way. That can mean speaking out about something that you don’t think America is doing to uphold its ideals, just as it can be to serve in the inner city or in outer space. There are so many ways to serve, and it’s important that each of us who are fortunate to do what we can for either a part or all of our lives to make this a better country and to become engaged. It’s what [President Kennedy] spoke about in his graduation address at Vanderbilt in 1963: the importance of being a participant and not a spectator. That’s a great tradition, and it’s certainly something that I have tried to continue on behalf of my parents, and I hope that in some way I’ve helped further it.

I’ve been really gratified in my work in education; I actually have a program with students in Japan, Korea, and the Philippines in the South Bronx where we get together monthly for a teleconference, and I’ve learned a lot and there’s a lot that we can do now not just in our close communities, but we can create close communities with people in other places. That will ultimately help us solve these global problems that impact us locally but can’t be solved without working with people from other cultures.

Asen: What do you think are the most pressing problems facing our nation today, and how can the next generation, such as the students and soon-to-be graduates of Vanderbilt University, play an active role in making a difference?

Ambassador Kennedy: I think that the students at Vanderbilt University should be the ones talking about what are the most important problems facing our country today because it looks different depending on your vantage point, and I think that this is a world that students and graduates are entering that is really different from even a year ago. What always inspires me is the answer I get from people at a different point in their own lives, and I feel like we’ve heard enough from people in my generation– we’ve seen what the results are– so I’m really counting on all of you.

Asen: I will give you an easier question for the last one, since I have been putting you on the spot this whole time. Much like President Kennedy, you have a deep appreciation of poetry. Do you have a favorite poem, and what makes it meaningful to you?

Ambassador Kennedy: That’s such a good question, and I never have a good answer, and then when I go home, I have so many answers! But, I guess because we’re talking about graduation, I will go with “Leap Before You Look” by W. H. Auden. Basically, you’ve got to sometimes leap before you look, and if you trust yourself, things will work out.