Vaush versus Bastiat: Highlights of the Debate at Freer Future Fest 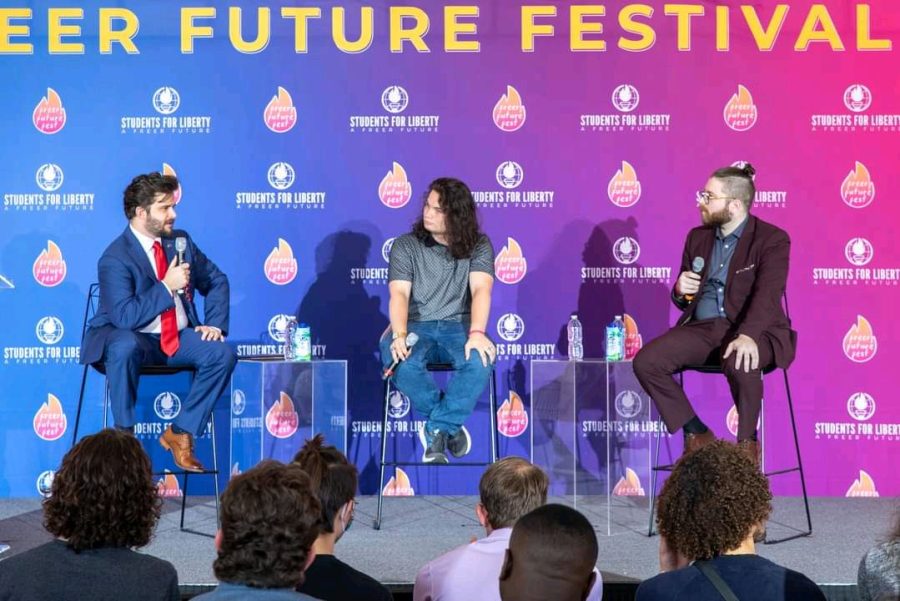 The Freer Future Fest – a libertarian conference in Nashville which members of the Vanderbilt Libertarians organization helped put on – hosted a debate on Saturday, October 9th, between political Twitch streamers Vaush and Bastiat. The conversation examined what “freedom” means and the types of freedom that society should prioritize to maximize people’s opportunities to experience fulfilling lives.

While Vaush argued that “freedom” requires the ability to enjoy basic prosperity and that we can promote this by reorganizing society around workers’ interests, Bastiat cautioned against “central planning” and proposed letting competition create wealth that can be taxed to fund universal programs for those who struggle.

In the opening, Vaush argued for “libertarian socialism,” claiming that “freedom” does not only entail negative freedoms – from government intrusion – but also positive freedoms, or the ability to act on one’s will. This includes the capability to travel and enjoy good health. Vaush contended that “socialism” does not simply create “big government” but rather reorganizes economic institutions to satisfy workers’ needs.

Bastiat opened by calling himself a “neoliberal” and established that, despite agreeing with libertarian principles, he supports the government alleviating poverty so that people don’t turn to radical or authoritarian ideas. He distinguished himself from Vaush by arguing that socialism can lead to central economic planning by a government, which can impede people’s negative and positive liberties.

Bastiat argued that even libertarian socialism requires institutions that would facilitate central planning. He discussed how “workplace democracy,” the concept that workers have a vote in company decisions, affects capital investment, arguing that Wall Street would no longer benefit from returns on trillions of dollars in investment. Thus, the government would have to assume control over the financial system, and it would likely loan to political allies rather than those who need money.

Vaush countered that just because the government has some responsibility in the financial system does not mean it will play favorites. He discussed the Paycheck Protection Program (PPP) as a broad framework for local institutions to administer as they see fit; it’s not the case that the federal government uses PPP loans to prop up political allies. Vaush added that bias in loan-granting is actually present on Wall Street, contending that banks don’t lend to worker co-ops because they are misunderstood as “scary,” despite generating high returns.

Bastiat voiced support for free trade. As an analogy, he discussed how Canada funds local arts and media, which cannot compete with international services like Netflix; therefore, this funding, while well-meaning, is inefficient. Similarly, allowing cross-border trade and manufacturing can produce cheaper goods that let consumers spend more money elsewhere. However, local businesses may struggle to compete and will shut down.

Bastiat admitted that, while free trade’s net effect is positive, the government should help those left behind by deals like NAFTA, such as former factory workers. He argued for universal programs like UBI over “means-tested” programs like welfare, claiming that UBI can give people money to spend however they see fit.

Vaush somewhat agreed with Bastiat’s points about the effects of free trade. He added that trade moves society away from small-town communities, since small businesses close when large corporations take over. Such urbanization also brings larger cities that are less walkable, requiring people to use cars to get around. Not only does this disenfranchise those who can’t afford cars – as they struggle to travel to jobs – but it also separates people. The death of local communities, Vaush argued, is associated with rising depression and lower community involvement.

Vaush’s comment transitioned the discussion to transportation. He argued that Denmark, which emphasizes more walking paths and less “car-exclusive roads,” has a better transportation system than the US, as it emphasizes greater local connectivity while being cheaper to fund. Vaush asserted that moving towards worker co-ops would let workers promote and implement their interests, such as more walkable infrastructure.

While Bastiat agreed that urbanization has moved jobs away from local communities, he disagreed that co-ops are the solution; the US has only 60% labor participation, so co-ops would not represent the other 40%. Instead, he argued to allow the free market to continue investing efficiently and generating strong profits that are taxed heavily. These taxes, he said, should fund universal social programs, including healthcare, to help poor people. He pointed out that the US spends more on healthcare than other countries while covering fewer people with fewer benefits, asserting that our patchwork state-by-state system is inefficient. Thus, a universal system would be preferable, according to Bastiat.

Ultimately, the debate introduced some thought-provoking topics, such as how we define liberty and how society should be organized to maximize those liberties.