The Fight for Freedom and Human Rights: Nicole Bibbins Sedaca Stresses the Importance of Democratic Institutions 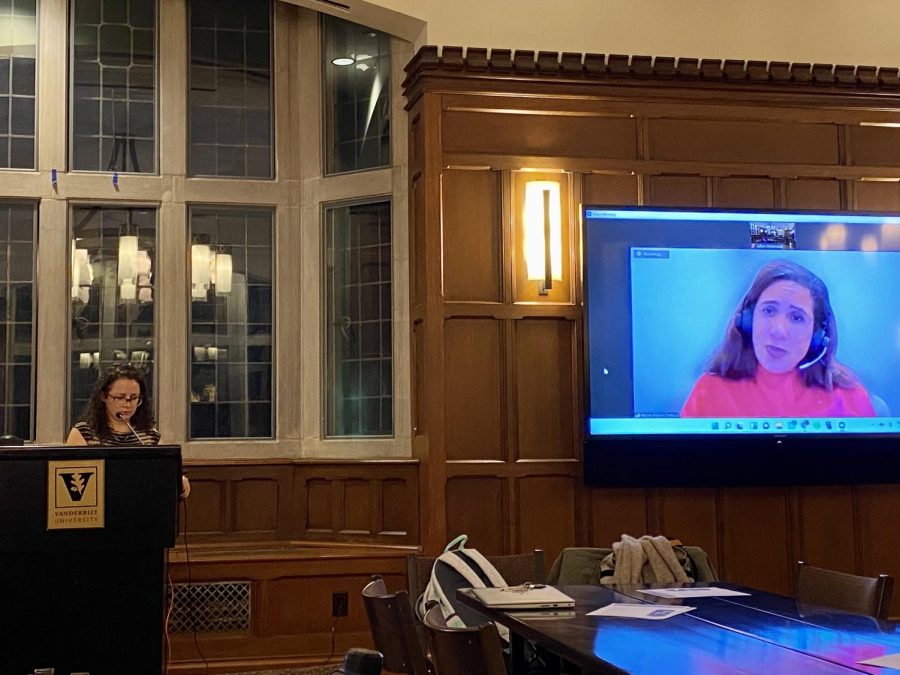 “Everyone has a really great opportunity to lead and live and engage democratically in their everyday life,” explained Nicole Bibbins Sedaca, addressing students via Zoom in a conversation that was moderated by Vanderbilt political science professor Dr. Emily Ritter.

But what exactly is it that citizens at home can do to engage with issues abroad?

Nicole Bibbins Sedaca is the Executive Vice President of Freedom House, an organization dedicated to researching and advocating for international human rights and democracy. In addition to her position at Freedom House, Bibbins Sedaca has served in the United States Department of State, has taught at Georgetown University, and is a Kelly and David Pfeil Fellow at the George W. Bush Institute. The event was hosted by Vanderbilt’s Alexander Hamilton Society on Wednesday, Dec. 1, 2021.

Ritter began the conversation by asking Bibbins Sedaca how she became interested in international relations and human rights. Bibbins Sedaca credited her upbringing in an international family, experiences abroad, and belief in public service. She went on to say that traveling to Berlin shortly before the wall fell and prior to the start of her career as an undergraduate had a profound impact on her.

Next, Bibbins Sedaca was asked about the work and mission of Freedom House. Bibbins Sedaca explained that Freedom House was founded on the principle that the United States should be engaged in global affairs and should fight for freedom and democratic values around the world. Today, their goal is to inform the public and decision makers about the threats to those values, as well as how they can be engaged in the fight. Freedom House also aims to mobilize actors, whether governments or individuals overseas, who are “key” in promoting democracy worldwide. Furthermore, Freedom House conducts the annual “Freedom in the World Report,” a qualitative report that tracks global trends in civil rights and liberties and ranks each country as “free, partly free, or not free.”

The following question posed to Bibbins Sedaca concerned the lessons she had learned from working with other countries that could be applied to the United States. Bibbins Sedaca pointed to the “significant amount of polarization” worldwide and the concerning trend of people questioning the legitimacy of democratic institutions when they don’t align with their personal views. This skepticism of democratic institutions, she stressed, can be observed in both young and mature democracies. Furthermore, misgivings about democracy can be exacerbated by populist leaders who seek to advance their partisan interests and often, as a result, threaten to erode democratic institutions.

In response, Ritter noted how the current lack of faith in democratic institutions highlights the importance of “diffuse support,” or the idea that it is possible to support an institution without personally agreeing with its outcomes or policies all of the time. She explained that diffuse support is “critical” for the foundation of our democracy.

Bibbins Sedaca agreed with Ritter, going on to say that even though “American democracy is not perfect,” there is still a significant difference between imperfect, self-correcting democracies and authoritarian regimes that have little regard for the concerns raised by their citizens. She emphasized that it is important for the United States to remain engaged in foreign affairs and maintain a sense of “humble confidence” on the world stage, in acknowledgement of both its imperfections and core values.

The next question brought the discussion to what citizens can personally do to promote democracy and be engaged with global conflicts. Bibbins Sedaca advised people to inform themselves about what is going on in the world and learn about the United States’ tools to support other democracies. She remarked that significant change has been made when citizens have chosen to get involved on the ground level. Bibbins Sedaca also advocated for the public to engage in civic discourse. She underscored that the citizens of the United States need to be open to “diverse views” so that the country can return to a place where rigorously debating those views is normalized. An acceptance of different perspectives can be furthered, she argued, by modeling it in our own behavior. Bibbins Sedaca continued by mentioning that a university provides an immense opportunity to hold such debates and further discussions about different ways of thinking.

In addition, Bibbins Sedaca spoke to the power citizens have on social media: “we all have a lot of influence through social media…and we have an opportunity to choose how we engage with populations, some of whom we know and some of whom we don’t.” She detailed her own pledge to “never post anything on social media where anyone could impugn [her] intention, even if they radically disagreed with [her] view.” Ultimately, she was promoting an intentional cultivation of a fair and open dialogue that prioritizes civility rather than inflammatory remarks.

In the final part of the discussion, audience members asked Bibbins Sedaca questions. In response to questions about social media and the advice she gave to citizens, Bibbins Sedaca re-emphasized her call to civility. Additionally, she discussed the importance of Track 2 diplomacy (diplomacy conducted by non-governmental actors) in situations where government-to-government interactions may not be the best option and identifying individual actors who can mobilize their community may be more effective.

When asked about the event, Claire Chen, co-president of Vanderbilt’s Alexander Hamilton Society, stated that she believed Bibbins Sedaca was “an excellent choice to inform us about pressing issues for the United States today and to ask questions about those issues.”