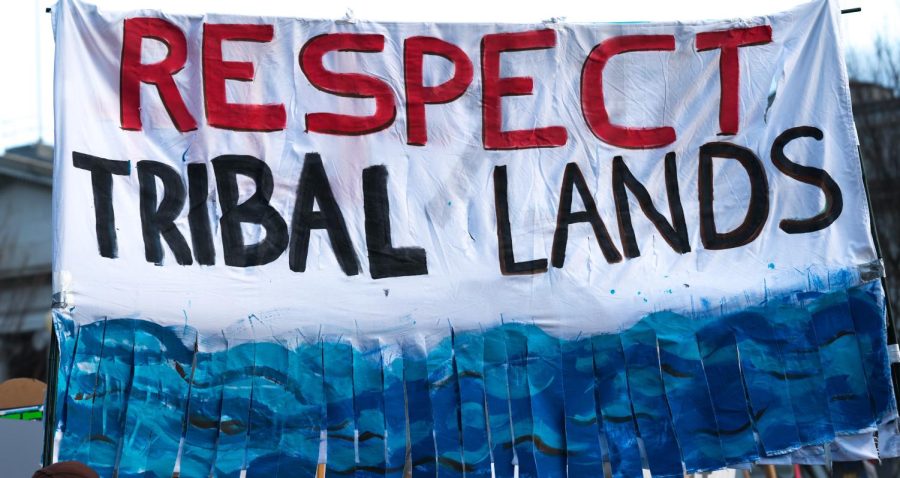 On Thursday, Oct. 14, Indigenous leaders protesting the construction of the Line 3 oil pipeline sat in the halls of the Bureau of Indian Affairs for the first time since the 1970s, leading to more than 50 arrests. Indigenous Environmental Network spokeswoman Jennifer K. Falcon released a statement saying “we will no longer allow the U.S. government to separate us from our relationship to the sacred knowledge of Mother Earth and all who depend on her.” A list of demands for President Biden included “abolition of the Bureau of Indian Affairs, restoration of 110 million acres of land taken away from Native Nations, no new leases for oil and gas or extractive industry on public lands,” and other demands centered around Indigenous rights.

Interior Department communications director Melissa Schwartz said in a statement that “multiple injuries were sustained by security personnel, and one officer has been transported to a nearby hospital. Medics representing both the Department and the protesters were present. Secretary Haaland is traveling and not in Washington, D.C.” She also emphasized the department’s commitment to peaceful protest, saying “Interior Department leadership believes strongly in respecting and upholding the right to free speech and peaceful protest. Centering the voices of lawful protesters is and will continue to be an important foundation of our democracy.”

The occupation took place on the fourth day of an event in Washington D.C. called People vs. Fossil Fuels, which was led by a coalition known as Build Back Fossil Free. The week of protests demanded that President Biden stop approving fossil fuel projects, focusing on the Line 3 oil pipeline. The Line 3 pipeline is a tar-sands oil pipeline owned by the Canadian corporation Enbridge with a replacement project planned across northern Minnesota into Wisconsin. The Minnesota Supreme Court declined to hear an appeal by construction opponents on Tuesday, Aug. 24, which allowed for a decision by independent regulators for construction to continue. As a result, many Line 3 protestors see President Joe Biden ordering the Army Corps of Engineers to cancel the project’s federal permits as one of the only remaining solutions.

One of the leaders in the movement against the Line 3 pipeline, tribal attorney Tara Houska, spoke at the Vanderbilt University Indigenous Studies Seminar two weeks before the protests in D.C. Houska worked as an advisor to Bernie Sanders and is the founder of Giniw Collective, an Indigenous-women led movement to protect Mother Earth.

At Vanderbilt, Houska spoke on a range of issues, including her reasoning for taking such direct action on the issue of climate change. She said “80 to 90 percent of the support and resources and energy and attention lies in very comfortable places, such as policy, proposed legislation, petitions, and marches, [which] are the types of approaches people have been engaging in for a very long time.” Houska, however, doesn’t think these methods go far enough, saying “I don’t think those are reflective of the urgent situation we’re in, we keep saying the world is one fire, but let’s start a petition. This is not about getting [as many people possible] involved, it’s about the survival of many species that are already going through mass extinctions.”

Another issue brought up in the People vs. Fossil Fuels protests was the U.S. government’s failure to uphold centuries old treaty agreements to Native Americans. Houska said in an interview with Inside America that “you’d see efforts by the Obama administration to fully fund some of these services that are guaranteed by the treaties that created the United States and then Congress gutting those appropriations and halving the budget,” emphasizing that “these are not special rights, these are rights that were paid for, for this country to exist.”

Regardless of the arrests or constant uphill battle with the U.S. government, it is clear that Houska and Indigenous climate activists will not relent any time soon. Houska wrote in an instagram post Oct. 6 that “Enbridge might be pumping filthy tar sands through a formerly untouched part of our territory, but we are not deterred. Not by a long shot.”