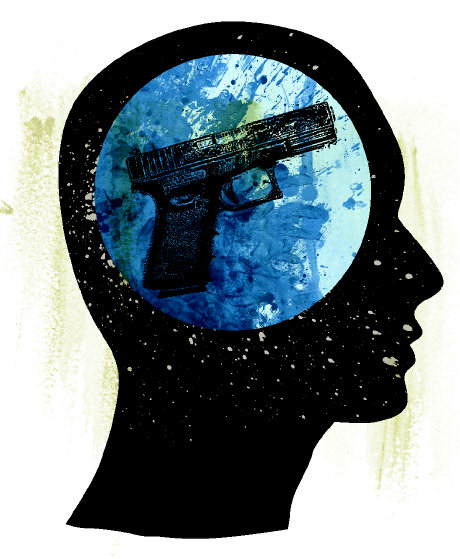 Unfortunately, advocacy for the mentally ill is puny compared to the lobby for the right to own handheld devices that  shoot deadly metal pellets at high speed. Between the gun-lobby’s intransigence and the Obama Administration’s timidity, mental illness has become the low-hanging fruit in the nation’s dialogue on gun violence.

At least a half dozen states and Washington D.C. are debating new legislation to deal with mental illness and gun violence.  Conservatives, Democrats, and even the Supreme Court have all agreed that while the right to guns may be sacrosanct, the rights of mentally ill Americans are not.

There are a variety of problems here. For one thing, “mental illness” is a nebulous term. It’s hard to imagine that ADHD or Social Anxiety Disorder or Tourette’s syndrome or Anorexia or Autism predicts violence. Most people with Major Depression have trouble motivating themselves to get out of bed, let alone commit a mass shooting. The overwhelming majority of mental illnesses have nothing to do with violence.

A second problem is a misunderstanding of how many people suffer from mental illness. Mona Charen of the National Review opined that “Between 5 and 10 percent of the untreated seriously mentally ill will commit violent crimes in any given year, accounting for at least 5 percent of homicides in the United States (a huge number in a nation of more than 300 million).” This sounds quite troubling, until one remembers that about 6 percent of Americans suffer from a serious mental illness, according to the National Institute on Mental Health.

In addition, twenty five percent of Americans currently suffer from mental illness of any severity and perhaps as many as one half will experience mental illness in their lifetime. So when Senator Marco Rubio touts the need to “keep guns out of the hands of the mentally ill”, it’s difficult to reconcile that with an individual right to bear arms. Unless, of course, Senator Rubio believes the federal government should maintain a database with the medical information of the 57 million mentally ill American adults and uses it to deprive them of firearms. Maybe he does believe that; NRA Chief Executive Wayne LaPierre recently called for an “active national database of the mentally ill.”

In fact, the seriously mentally ill are “involved in only about 4 percent of violent crimes and are 11 or more times as likely than the general population to be the victims of violent crime,” writes the New York Times. When people fear the violent “mentally ill”, the image they have in mind is probably of a lonely man with untreated paranoid schizophrenia (this comes to mind). Even then, the overwhelming majority of schizophrenics people with schizophrenia are not violent, and there’s a whopping one in 14.3 million chance that a given individual will be killed by a stranger with schizophrenia. Treatment also eliminates any additional risk of violence. Meanwhile, as I wrote in a previous column, a randomly selected young male is far more likely to become violent than a random person with schizophrenia. But strangely, no one considers a national policy of keeping guns out of the hands of men aged 18 to 24.

Consequently, New York’s new law to require psychiatrist to assess all patients’ risks of violence and report this information to law enforcement is unlikely to work, in no small part because such assessments are frequently wrong.  “The biggest risk for gun violence is possession of a gun,” says Steven Hoge, a Columbia University professor of Psychiatry. “And there’s no evidence that the mentally ill possess guns or commit gun violence at any greater rate than the normal population.” A more likely effect of this law is that it will deter patients from speaking their mind or even seeking treatment, since a suicidal remark might result in the police entering one’s home to confiscate firearms.

Focusing on those diagnosed with severe mental illness could even cause psychiatrists and law enforcement to overlook more likely threats; most mass murders, for example, are committed “by working-class men who’ve been jilted, fired, or otherwise humiliated — and who then undergo a crisis of rage,” writes Dr. Michael Stone, a New York forensic psychiatrist who has reviewed 200 hundred mass shootings. These shooters often “have elements of paranoia, of deep resentment, or of narcissism … that are noticeable but do not add up to any specific ‘disorder’.”

America’s mental health system is undeniably fractured and deficient — for example, twenty-two veterans commit suicide every day. But mental health care is harmed, not helped, by blaming gun violence on the mentally ill. A variety of research shows that mental illness stigma is the biggest deterrent to seeking treatment, and by portraying Jared Loughner and James Holmes as the faces of mentally illness, politicians and the media are condemning millions of sick people to unnecessary misery.