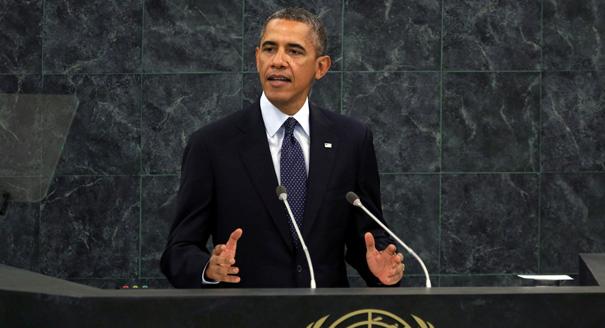 “The leaders who built the United Nations were not naive. They did not think this body could eradicate all wars. But in the wake of millions dead…and with the development of nuclear weapons that could annihilate a planet, they understood that humanity could not survive the course it was on. And so, they gave us this institution, believing that it could allow us to resolve conflicts, enforce rules of behavior, and build habits of cooperation that would grow stronger over time.”

President Obama began his speech at the United Nations General Assembly yesterday with these words. Were the founders naïve, though? Are we still naïve for thinking that the institution works?

Every year, the U.N. convenes for its General Assembly in New York City. All the member nations have delegates present, and many leaders of the member nations come also. The idea of this even being possible a hundred years ago was far-fetched. Modes of transportation and mediums of communication simply did not allow it. However, in our modern world, leaders can stay connected constantly. Then why does the notion of a General Assembly being productive still seem far-fetched today? Cynics would tell you that each country is concerned only with its own well-being and that the U.N. is a charade of international cooperation. Idealists believe that 200 nations can come together and accomplish goals for the common good. As always, the truth is in the middle. Increasingly though, it seems like the middle is not good enough. This week, the week that should strengthen the resolve of countries that want to cooperate with the international community, instead sheds light on the failures and inherent difficulties of the United Nations. The Security Council is the epitome of these failures. Oftentimes, it is stalemated into having no effect on international conflicts.

The United Nations Security Council is an elite cadre of nations comprised of five permanent members: the United States, Russia, Great Britain, France, and China. Five other nations are elected to 2-year terms, but only permanent members may veto proposals. The issue that the Security Council often runs into is the fact that one veto can handcuff the power of the entire United Nations delegation. Currently, the Security Council is in one of its deadlocks. A resolution that promises consequences for Syria if it fails to surrender its chemical weapons is on the table, and it has support from most members of the Council. However, the resolution will likely never pass because of Russia’s alliance with Assad. This is only the most recent example of the Security Council’s ineptitude. Calls for reform have steadily been growing. The Bangladesh ambassador to the United Nations says, “The world should be dynamic. Things are changing and it [the Security Council] should rise to the occasion. The system was developed at the (sic) time was a good one but over the years things have changed and those realities should be incorporated.” A former UK ambassador to the UN was surprised by the inattention to the affected nation’s opinion. She pointed out that, “…whether it’s Iraqis, Kosovars, Sudanese, or Syrians, their legitimate representatives would never get a chance to have a say on what they thought the Council – what the world should do.”  It’s clear that these two UN representatives have legitimate gripes. The Security Council has gone unchanged since the inception of the UN after World War II, yet the geopolitical structure of the world has vastly changed. For example, Vietnam was still under French colonial rule, Russia was the powerful Soviet Union, and Ghandi was just beginning his nonviolent resistance against Great Britain. The changes worldwide have been massive, but the changes on the Council have been non-existent.