Woman of the Week: Wendy Davis 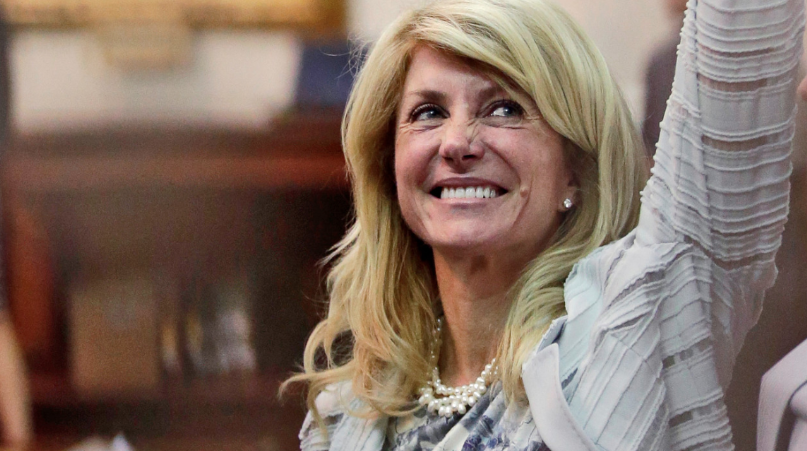 Why she is the Woman of the Week: You cannot have been connected to social media June 25th of this year and not know who Wendy Davis is. She rocketed to the national political stage when she stood and spoke for eleven hours in order to filibuster an omnibus anti-abortion bill, Senate Bill 5, which banned abortions after twenty weeks of pregnancy and close almost all of the Texas clinics that perform abortions (it eventually passed in July). Davis became an overnight sensation. The hashtag #StandWithWendy began trending as high as some 125,000 tweets per hour. Barack Obama used it. Lena Dunham tweeted her support. John Oliver made a joke about a new line of shoes, the Fila-busters, the next night on The Daily Show. She has also been recognized locally and nationally for her work. Readers of Forth Worth Weekly voted her “Best Servant of the People.” She received the “Bold Woman Award” from Girls, Inc., “Freshman of the Year” from AARP, and was listed about the “12 State Legislators to Watch in 2012” by Governing Magazine. Many have started to speculate that she will use this national notoriety to make a bid for the governor’s mansion in 2014.

Background: Davis became a national political figure against all odds. Her parents divorced when she was young, and she began working at the age of 14 to help her mother, who had only a sixth-grade education, support her and her three siblings. The summer before her senior year, she moved in with her high school boyfriend. The couple found out they were expecting shortly after graduation and decided to get married. The marriage lasted less than two years, and by nineteen, Wendy was a divorced single mother working two jobs and living in a Richland Hills mobile home. To better support her young daughter, she enrolled in a paralegal program at the local community college. After two years of community college, Wendy transferred to Texas Christian University. With the help of academic scholarships and student loans, Wendy not only became the first person in her family to earn a bachelor’s degree, but graduated first in her class and was accepted to Harvard Law School. After graduating with honors at the age of 33, Wendy became a practicing attorney in Fort Worth and served nine years on the Fort Worth City Council, where she was recognized as a leader on economic development issues. She won her State Senate seat in 2008—a squeaker over the longtime Republican incumbent, and she pulled out another in 2012 after her team successfully challenged a Republican gerrymandering plan that would have put her in a much more conservative district. Despite her rise to fame, she faces a tough 2014 reelection battle for her current seat—Texas is still a deeply red state.

Key Issues: Clearly Davis is now a national spokeswoman for women’s issues. However, Davis has sponsored bills on everything from cancer prevention to payday lending to protecting victims of sexual assault to government transparency. And her June filibuster was not her first. In 2011, she used the tactic against a budget that underfunded the state’s public schools by $5 billion, and two years later got most of the money replaced—though Republicans stripped her of her position on the education committee.

Her Latest Headline: “Ted Cruz vs. Wendy Davis in Battle of the ‘Filibusters’” – ABC News

“Lawmakers, either get out of the vagina business or go to medical school” – Wendy Davis