Woman of the Week: Susan Collins 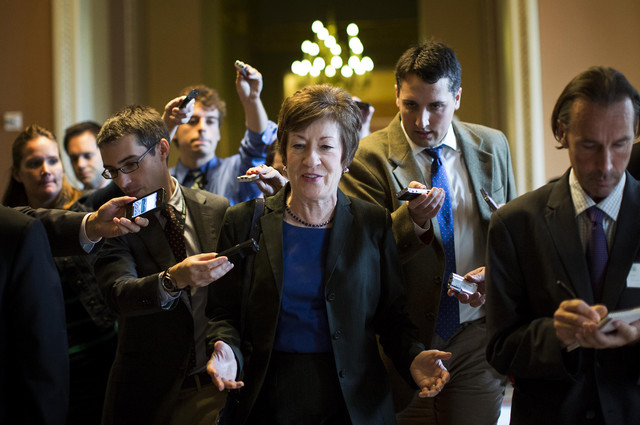 Why she is the Woman of the Week: Senator Collins has arguably been the leading force in finding a deal to end the now sixteen-day government shutdown. A recent New York Times article described her as “the most powerful moderate in the Senate.” Collins had spoken out against her party’s strategy to tie a strike against Obamacare to the year-end spending bill from the beginning, and two Sundays ago gave a speech urging her colleagues to work together to find a solution to the crisis. Remarkably (in this Congress), Collins actually put her money where her mouth is. She proceeded to write her own proposal to get the government up and running again and keep the country off the brink of default. With the help of fellow Senators Lisa Murkowski (R-AL) and Kelly Ayotte (R-NH), she formed a bipartisan group whose negotiating framework formed the centerpiece of a tentative Senate deal to end the crisis. This is far from the first time that Collins has crossed the aisle to work for what she sees as the greater benefit for the country. In 2008, she joined the bipartisan “Gang of 20” seeking comprehensive energy reform. Though she did vote against the Affordable Care Act, she was one of three Republicans who voted for President Obama’s stimulus plan in 2009—earning quite a lot of criticism from the right. Collins was also the primary Republican sponsor of the Don’t Ask, Don’t Tell Repeal Act of 2010. Congressional expert Ross Baker says, “Susan Collins is a gang of one. She is the person the Democrats turn to almost immediately when they want to try to get bipartisan support on legislation.”

Background: Collins showed interest in government from a young age, which, considering her background, is no surprise. Both of her parents served as mayor of her hometown, Caribou, and her father also served Maine as a State Senator. When she was 17, she participated in the Senate Youth Program and met her longtime idol Sen. Margaret Chase Smith, who in 1950 stood up to Sen. Joe McCarthy with her “Declaration of Conscience” speech. She served as president of her school’s student council, and went on to attend St. Lawrence University, where she graduated magna cum laude with a degree in—what else—government. After college, she served in the offices of Maine Republican Rep. William Cohen and then Gov. John McKernan before she was appointed New England regional director for the Small Business Administration by President George H.W. Bush in 1992. Running as a Republican in 1994, she was the first woman in Maine’s history to earn a major-party nomination for governor, though she lost in the general election. However, she successfully ran for Senate in 1996 and has never missed a vote, casting her 5000th consecutive vote in July 2012. Sen. Collins was awarded the U.S. Chamber of Commerce’s 2013 Spirit of Enterprise Award. She sits on the powerful Appropriations Committee, as well as the Committee on Armed Services, the Committee on Homeland Security and Governmental Affairs, and is the Ranking Member on the Special Committee on Aging.

“I don’t think it’s a coincidence that women were so heavily involved in trying to end this stalemate.” – Susan Collins