U.S. Senators from Tennessee Plan for Action with the Corker-Alexander Plan 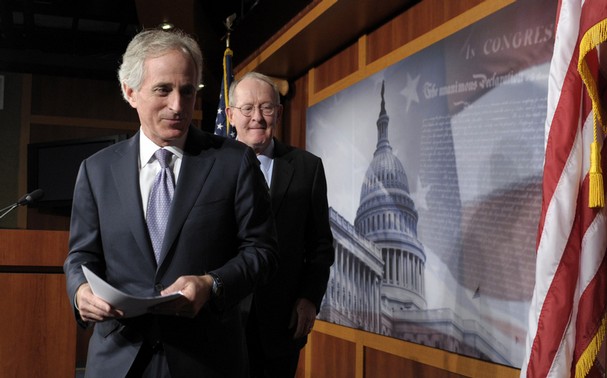 “I voted in September against shutting down the government, and today I voted to reopen it and to make sure that the United States pays its bills on time. We need to redouble our efforts to fix our country’s $16.7 trillion federal debt. We could start by passing the Corker-Alexander plan to reduce out-of-control entitlement spending by $1 trillion over the next 10 years.”

“It is beyond belief that Congress chose to pursue an effort that had no chance of success and wasted time that could have been spent putting in place spending reforms that will make our country stronger. But I do consider it a victory that we forced adherence to the Budget Control Act spending restraints, which for the first time since the 1950s, have caused us to reduce total government spending for two consecutive years,” said Corker. “There’s much more work to do to get on a path to fiscal solvency, and I look forward to continuing that important work.”

Essentially, the Budget Control Act of 2011 was created in response to the 2011 United States debt-ceiling crisis and the continual debate about government spending levels. In effect, the act reduced government spending. However, it additionally permitted non-emergency discretionary spending that incentivizes Congress to actively reduce the deficit. Specifically, it created automatic spending cuts and mandated a discretionary budget of $986 billion in fiscal year 2013.

On October 16, 2013, Corker and Alexander both supported the Senate Amendment to H.R. 2775 that upholds the Budget Control Act by requiring current funding levels of $986.3 billion. However, this extends only until January 15, 2014 and is in fact only a temporary measure to prevent default.

Though H.R. 2775 provides a short-term solution to the government shutdown, Corker and Alexander continue to communicate the importance of fiscal sustainability through the Corker-Alexander plan that specifically reduces spending by $1 trillion in the next 10 years.