The Ridiculousness of Gerrymandering

Take a look at this picture: 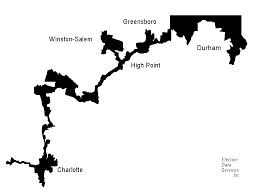 This may look like a Rorschach test that a sadistic psychologist might give, but it is actually North Carolina’s 12th district, and it is an example of what is wrong with our democracy. Gerrymandering relegates a political party in a state to as few seats as possible. For example, North Carolina’s Republican controlled legislature formed the 12th to stretch from Charlotte to Durham in the most creative (read: calculating) way possible. In this way, the 12th is heavily Democratic (Melvin Watt won with 70% of the vote) and has a plurality of African-Americans. By controlling state legislatures, Republicans could pack Democrats densely into areas to form dark blue districts, and create less dense but more Republican majority districts. This isn’t to say that only Republicans gerrymander; rather, Republicans are just much better at the strategy. (Charlie Cook claims Republicans have more than 180 “safe” seats nationally compared with approximately 135 such seats for the Democrats.) According to Sanford Levinson, “Republicans were able to win a 34-seat majority in the U.S. House of Representatives in 2012 despite trailing Democrats by approximately 1.4 million votes overall.” In Pennsylvania, the Democratic candidate won in the Senate race and the Presidential race by sizable margins; however, Republicans won 13 of 18 Congressional seats. All this goes to show the artificial manipulation that gerrymandering has on the House of Representatives. When the will of the people is not accurately and proportionally represented, Congress makes decisions that the population doesn’t agree with and they end up having a 10% approval rate.

Gerrymandering doesn’t only skew the representation in Congress. Gerrymandering is responsible for making moderate, swing districts exceedingly rare. Instead, gerrymandering creates safe, dark red or blue districts. For example, Texas’ 1st District is led by Rep. Louie Gohmert (R-TX). In what had been a Democratic seat since Reconstruction, Gohmert won the seat in 2004 after Tom DeLay led a redistricting effort in Texas. Now, Gohmert has held the seat for 8 years winning his last three elections by an average of 65 percentage points. In other words, he is untouchable. When districts like Texas’ 1st get drawn, they create career politicians that do not have to fear the wrath of a moderate populace. The representatives in these districts have license to say and do anything they wish, without being concerned about reelection. For instance, Louie Gohmert has:

Railed against a hate crimes bill that included sexual orientation as a protected group by saying that it would lead to pedophiles, necrophiliacs, and bestiality being protected by the law too.
Created the idea of “terror babies” that were a conspiratorial plot between al-Qaeda and illegal immigrants.
Said that John McCain supports al-Qaeda.
Claimed that liberal elites were going to use vaccinations to cull the population of the world down to 700 million.

Gohmert was also one of the Tea Party Republicans in the House whose actions directly led to the shutdown of the government. Gerrymandering allows people like this to be leaders of our country, and in all likelihood, Gohmert will continue to be the Representative for the 1st District for the foreseeable future. If gerrymandered districts received greater legal scrutiny or if the United States subscribed to a proportional voting system, a great majority of Congress’ issues would become moot. I believe that the United States is not as ideologically divided as Congress is. Unfortunately, political tactics like gerrymandering obscure that fact from much of my fellow citizens and the international community. Partisan politics is a destructive fire that is consuming our country from within, and gerrymandering is the gasoline that fuels it.