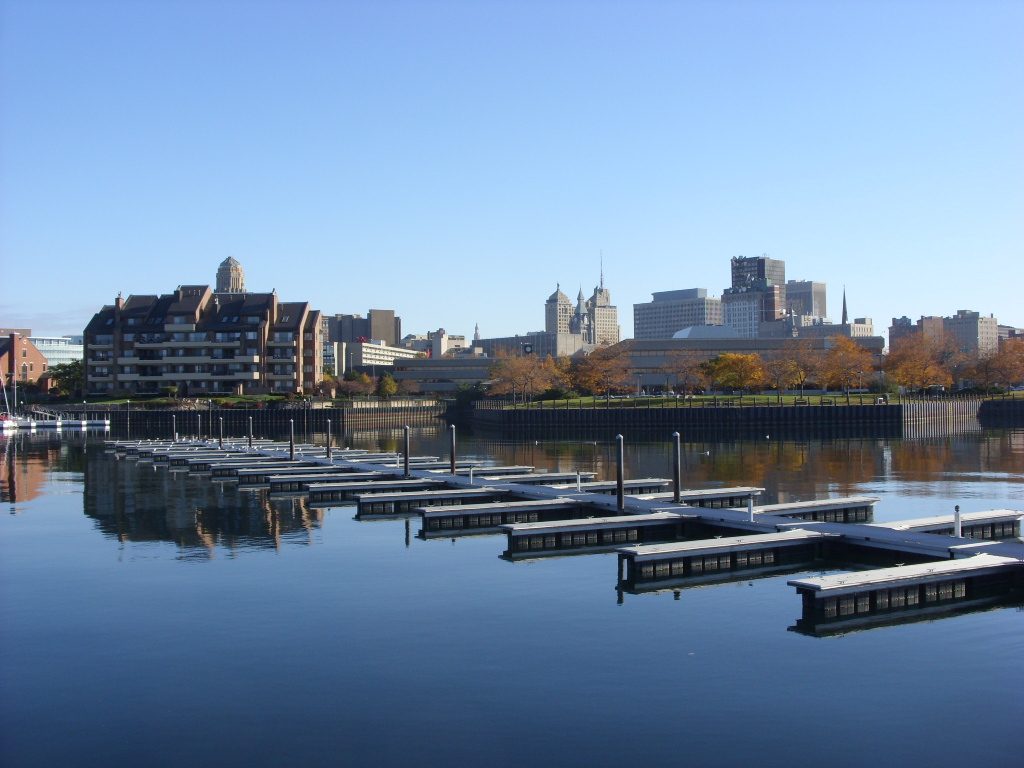 “Covering American Issues, one city at a time”

Often eclipsed by another little city in New York, the city of Buffalo is the second largest city in the state. Buffalo has struggled, like many US cities, with the repercussions of a slow national economy. Despite these struggles however, the city has managed to rejuvenate old industries and discover new ones.  The Federal Bank of New York noted growth in educational and health services and construction. This week former Secretary of State Hillary Clinton spoke at the University of Buffalo, applauding Buffalo for the progress it has accomplished in recent years. “The seeds that were sown years ago are starting to bear fruit…I have to say it’s really looking good.” A large part of Buffalo’s success lies in the city’s efforts to bring the voice of the people into city hall and the collaborative effort between government, business, and grassroots organizations.

Buffalo has seen a consistent decline in its population since the recession. A decline in population is a bad sign for any city in many regards. It may represent an exodus of the city’s talent (called a brain drain) or reflect a weak economy; but for every city it represents the loss of tax dollars. While industries are growing in and around Buffalo, the local government cannot afford to spearhead large programs to increase development. Instead, the city has turned to its citizens to address some of the city’s issues. In 2006, the City of Buffalo launched The Citizens’ Participation Academy to inform residents of how their local government works and how it addresses community issues such as education, public safety and economic development. After ten weeks of free courses, participants are equipped with a solid understanding of how they can help the government and the limits of the government. A similar program, the Urban Fellows Program, exists specifically for Buffalo’s large college population – the city is home to eight four-year institutions. The Mayor’s Office has also created a Livable Communities Grant Program for civic groups looking to undertake projects that revitalizes Buffalo’s neighborhoods. Buffalo’s most prominent community organizations have banned together to help inform citizens as well. The Partnership for Public Good provides citizen toolkits, hosts public forums, and produces an annual agenda of issues that need to be addressed. Policies like these, that reach the people directly, help maintain an informed constituency that can take a greater role in their future. A combination of this knowledge and grassroots organization can really benefit a city.

Reading the headlines about Buffalo, one gets a sense that it is truly a city run by its people. For Buffalo, a city whose architecture and buildings are deeply intertwined with its history, organizations have emerged to tackle the growing number of abandoned buildings and spaces in the city. Last year, Buffalo residents rallied to bring some of the original fixtures of the Central Terminal Restoration Corporation back home. Together Buffalonians under the direction of Broadway-Filmmore Alive, an community group promoting the revitalization of one of Buffalo’s historic neighborhoods, raised $3,000. Recently, local businessman Howard Zemsky invested his own money into revitalizing a historic, decaying warehouse near downtown Buffalo. Not stopping there, Zemsky continued to see through the redevelopment of the area around the warehouse. Raising donations and state funds, Zemsky created Larkin Square, a dynamic public space. Citizens have turned to other venues to do their part to see the growth of Buffalo. Media projects, like Buffalo Rising, have popped up to report the good happening throughout the city.

While the city has by no means completely recovered from the recession, the unique policies it has begun implementing regarding community engagement warrants more conversations about urban growth through joint efforts. Programs like the The Citizens’ Participation Academy, in collaboration with local businesses and organizations, have slowly, but surely begun to rebuild Buffalo brick by brick. Other cities across the country have similar policies, but in Buffalo this model has worked exceptionally well. While there is no one size fits all method of addressing urban issues, the collaboration of policy makers, businesses and grassroots organizers on every level lays the foundation for a more cohesive urban structure.