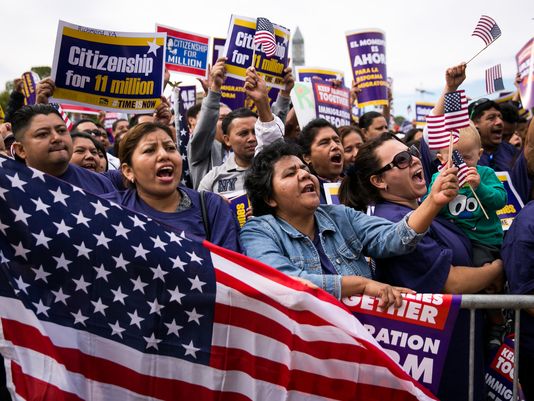 “We should finish the job of fixing our broken immigration system.”

Despite the tension caused by the traumatic shutdown, President Obama is still adamantly pushing for liberal reform as he directs his attention now to the issue regarding immigration reform.  There is no time like the present, though one does question the President’s decision to ride on the momentum of the socially taxing government shutdown.

The Republican Party’s response is also unpredictable.  It can result in compliant support after their shutdown fiasco or a unanimous outcry against President Obama’s plans in defense of retaining their party’s power despite their recent loss.

Immigration policy is hailed as one of the most controversial issues of the decade.  It has rattled American society, divided Congress time and time again, and has led to many a confrontational battle between party representatives.  How can one forget the fervid, emotionally high-strung Arizona rally in 2010 in response to the particularly controversial SB 1070, or the challenges faced in education by DREAMers who struggled to receive a college degree due to legal status?

This year bears witness to major victories in terms of immigration legislation, creating a climate for change.  Earlier this month, California passed the Trust Act, prohibiting the deportation of undocumented immigrants for minor transgressions.  The Senate also introduced their bill this summer to give undocumented immigrants a pathway to citizenship.  This reform bill, written with the support of Republicans including John McCain, depicts optimism that a collective agreement between both parties can be achieved.

Still, the question remains: can actual, national reform be achieved before the end of this congressional year as the House starts its in-depth scrutiny of the Senate’s legislation? Though there have been significant reform bills introduced by both parties within the House, it is imperative for a joint consensus to be made quickly to prevent the issue from being pushed to another term.  With only 14 sessions in Congress remaining, the probability that there is an agreement this year is debatable.

It is up to our congressmen to decide how they handle the legislative matter. I think I am speaking for majority of the American people when I say I hope our representatives can put party affiliations aside and work to finally pass effective immigration reform for the good of the nation.