In Defense of Gentrification 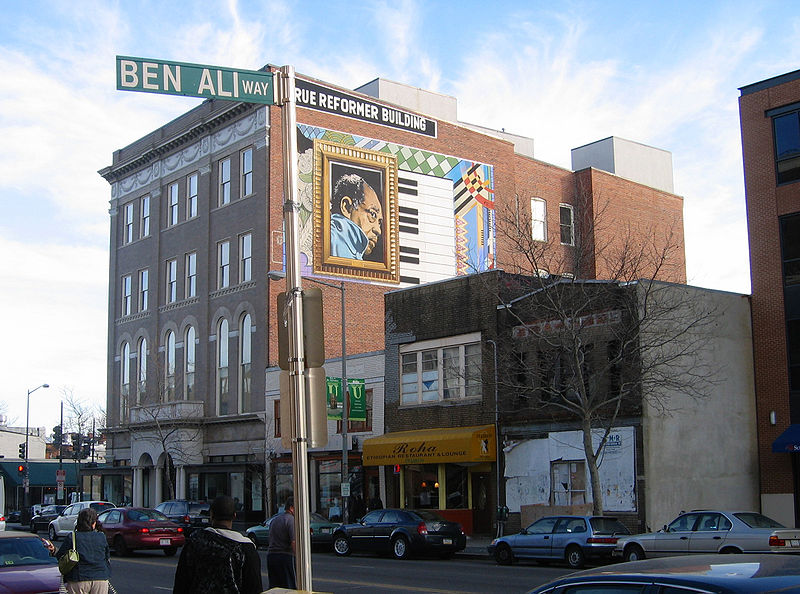 This essay, authored by Caylyn Perry ’17, appeared in the Fall 2013 print issue.

Scaffolds hang in the air at almost every street corner. New restaurants and luxury apartment buildings pop up all over D.C.’s K Street. Landscaped and planned to perfection, the area looks as expensive as it is. A one-bedroom condo on K Street will cost a buyer anywhere between $369,000 and $429,000. But at 4th and K Street, in the midst of this development, is a small corner unit; here, K Street reveals its origins. A few years ago, these high rises did not exist. Instead, drug dealers and thugs plagued the corner. Where new buildings rise, complexes’ needs lay abandoned, left to decay or serve as shelter for the homeless. Painting a stark contrast between the past and the present, 424 K Street has bars on its windows and a security system worthy of a military facility. Yet when the building was purchased in 2002, the bars and security were crucial to any business in the area. When the owner of the unit purchased the K Street property, people thought he was crazy. But today, the joke is on them: the property is now worth over one million dollars.

Take a short metro ride to Anacostia Station in Southeast D.C. and the same bars mar the faces of buildings, but unlike in the case of 424 K Street, they are commonplace. Here the streets and sidewalks lack the freshly-paved look K Street boasts. A cursory glance proves that the wealth that has benefited K Street has not extended to this quadrant. But in just 11 years, how did two different worlds emerge within one city?

Enter former Mayor Anthony Williams. When Williams took office in 1999, he had already served as the city’s Chief Financial Officer and was responsible for rejuvenating the city’s economy. His constituents expected him to do much of the same as mayor. During his eight-year tenure, Williams brought in millions in revenue and oversaw a rapidly falling crime rate.

But D.C. was already primed for this transformation before Williams entered office due to former President Bill Clinton’s 1997 Taxpayer Relief Act. The legislation enticed first-time buyers and incoming businesses with attractive tax incentives that specifically appealed to single homeowners. The bill, which expired at the end of 2011, was linked in 2005 by a Fannie Mae study to the city’s increase in former suburban residents and boosted urban home values. Between the Taxpayer Relief Act giving financial incentives for businesses to set their roots in D.C. and Williams steamrolling their path, many parts of the city once associated with violence and drug use now look like K Street.

At the same time, Williams’ policies condemned an already struggling lower-class constituency. Instead of spreading prosperity across the entire city, Williams’ policies moved east, hitting a wall right at the border of Southeast D.C, the city’s poorest region. This section of the city seemed impenetrable to both Williams and the tax incentives. As the other three sections of D.C. saw large-scale growth during the mayor’s tenure, the situation in Southeast D.C. continued to deteriorate. The policies set in place did not seek to address the underlying issues within the city, but rather sought to bring in a whole new demographic of people. By design, the poorest of the city live in Southeast – according to the District of Columbia Housing Authority, the city currently has close to 7,590 public housing units, about forty percent of which are in Southeast D.C. In addition, Southeast D.C. has failing schools that require metal detectors, and the city’s highest crime rates. The situation worsened when Williams closed the city’s only public hospital—located in Southeast D.C. Medicaid recipients were transferred to United Medical Center, which has since felt the pressure of an overwhelming number of patients that rely on the government or are uninsured. Fast forward twelve years and three owners later: the non-profit United Medical Center is barely staying afloat and has yet to see a steady stream of revenue. The instability of the hospital threatens access to affordable healthcare services for many D.C. residents.

But soon, even Southeast D.C. may resemble K Street. Although the city as a whole has experienced increased property values, Southeast D.C. has proven immune. Relatively low property values combined with the tax incentives President Clinton introduced make this quadrant the perfect location for middle class residents. Yet this creeping gentrification is contrary to public schema. There is a tendency to blame white middle-class individuals for the displacement of minorities, and gentrification inherently harms the lower-class. In the case of Anacostia, however, it is actually the black middle-class who is entering and shifting the dynamics of the region. Comfortable with the homogeneity, middle-class blacks have in recent years entered Southeast D.C. for the relatively inexpensive housing. For those who see gentrification as only a race issue, this middle-class black population gets lost.

Regardless of who does the gentrifying, local governments must institute policies that ensure both overall growth and economic equality. Since 424 K Street was purchased in 2002, the city has continuously focused on how to improve and grow, but has completely ignored the problems that stem from growth. There has been a failure to understand that policies to better the city must be coupled with policies to help individuals hurt by these changes. Displaced residents must now readjust to an entirely different state. While a low income resident pushed out of any other U.S. city is assured the same state assistance as before, D.C.’s displaced populations lose district government aid. The District of Columbia is only 68 square miles in size, and once a citizen has been pushed beyond city boundaries, he becomes another state’s problem. These gentrification refugees are forced to re-navigate a new state system—a process that can be laden with bureaucratic red tape.

If gentrification policies included measures to counteract the foreseeable negative effects, there would be greater overall growth. Taking some of the city’s new financial gains and investing them in more efficient public housing is one strategy. “The D.C. Public Housing System, also known as Section 8, does not always pay landlords the rent owed,” D.C. real estate broker Louis Poblete told the Vanderbilt Political Review. “It has [become] a pattern for [the District’s Housing Authority] not to pay,” explained Poblete. Failures like these discourage landlords from volunteering their buildings for public housing. D.C.’s government should provide incentives for landlords outside of Southeast to apply to become part of Section 8. Spreading public housing into different wards allows lower income residents access to the resources not readily available in Southeast D.C. In Wards 7 and 8 – where about forty one percent and forty eight percent of residents, respectively, do not own cars – there are only seven large grocery stores to service over 144,000 individuals. To address this unequal distribution of resources, the government should consider providing additional tax incentives for businesses in Southeast D.C. itself, specifically in Wards 7 and 8, which comprise the majority of Southeast D.C.

It is assumed in the modern literature that these results are all connected: gentrification leads to the growth of the city’s wealthier constituency and a decline of the lower-class. But gentrification does not have to follow this pattern, nor does it have to lead to the polarization D.C. has developed with areas like K Street and Southeast D.C. There will undoubtedly be casualties when trying to rejuvenate a city, but the goal of local governments should be to limit these as much as possible. No government can predict exactly what will happen as a result of its policies, but partnering with community organizations on the ground provides some insight. Grassroots organizations often understand the dynamics of the city better than officials because their work transcends statistics and focuses directly on the individual.

Too often gentrification is encumbered by a negative connotation while officials, like former Mayor Williams, are praised for spearheading development. The aims of gentrification should be applauded, but mayors who allow the process to continue without providing the necessary policies to control it should be disparaged. But what mayor is going to put in the extra effort to implement such policies if the process of gentrification is always blamed? If the country continues to view innovation within cities as a zero-sum game, no local government will be held accountable for addressing urban issues.