Eroding at the Center 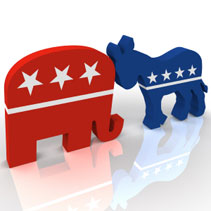 This essay, authored by Kevin Schoelzel ’14, appeared in the Fall 2013 print issue.

Over the past several decades, partisanship has grown in the Federal government and political discourse has devolved to the point where brinksmanship and crisis seem to be the only way to get Democrats and Republicans to legislate.  This partisan fighting in Washington crescendoed this past October with the government shutdown and debt ceiling crisis. To understand political gridlock and take steps towards its mitigation, it is important to understand how partisanship manifests itself differently in the two chambers of Congress. In the House, strong partisan allegiances seem likely to persist, while in the Senate, there is a greater possibility for compromise.

There is a large body of research detailing political polarization in the House of Representatives. Gerrymandering is often lamented as the source of political impasse, but research shows redistricting is not the primary cause of America’s increased gridlock. Political scientists Nolan McCarthy, Keith T. Poole, and Howard Rosenthal argue there is little evidence of a link between gerrymandering and polarization, but concede that redistricting has increased the number of Republican seats. More recent studies instead suggest that polarization is a reflection of the American political disposition at large.  In February 2013, Howard Rosenthal teamed with Adam Bonica to evaluate the polarizing effects of campaign contributions and how donors’ ideological beliefs affect representatives’ voting behavior. Their study, which examines thirty years of contribution data, indicates that in the short-term, it is unlikely the House will grow less partisan.

In the Senate, however, there may be hope for cooperation. Structurally, the Senate has advantages over the House when it comes to fostering cross-aisle agreements. First, members of the Senate are insulated from fluctuations in public opinion by longer terms. Additionally, in most states, Senators tailor their positions to more diverse constituents than the parochial interests of smaller Congressional districts. As a result, the Senate is more likely to exhibit bipartisanship.  Among Senators, incentives for bipartisan cooperation are stronger for representatives of states that did not vote for the presidential candidate of their party in the last election. There are currently nineteen of these “purple” Senators. Politically, these Senators must tread the line between their principles, constituents, and parties; thus, they are under more pressure to broker deals, furthering bipartisan efforts. For example, during the October 2013 debt crisis, Susan Collins, Maine’s Republican Senator, played a critical role in negotiations. On October 11th, she put forth a compromise bill with wide bipartisan support. Though this bill did not reach the President, it encouraged dialogue between parties, and many of its key provisions were included in the final deal struck on October 16th.

Still, not all partisanship is detrimental. Democracy is based on disagreement, discussion, and compromise.  The people of the United States hold a diverse collection of interests and views that the government should represent.  Nonetheless, the government has become too polarized.  In the House, it appears these trends will hold for the foreseeable future. Unless the American voting public drastically changes its preferences for Congressional candidates, the same brinksmanship behaviors will be rewarded with reelection. In the Senate, the best hope for cooperation comes from the election of more “purple” Senators. It takes two chambers to pass legislation, however, and ultimately, it is up to the electorate to realign itself towards the center. There is hope: in a frequently cited NBC News/Wall Street Journal poll released during the October 2013 government shutdown, 60 percent of Americans said they desired to fire all members of Congress, including their own representative. These numbers are a stark break from past sentiment, which typically reflects general disgust with Congress but support for one’s individual representative. While the voters’ tempers may cool before the midterm elections in 2014, it is clear the American public is weary of partisanship in Washington.