Ants Under a Magnifying Glass 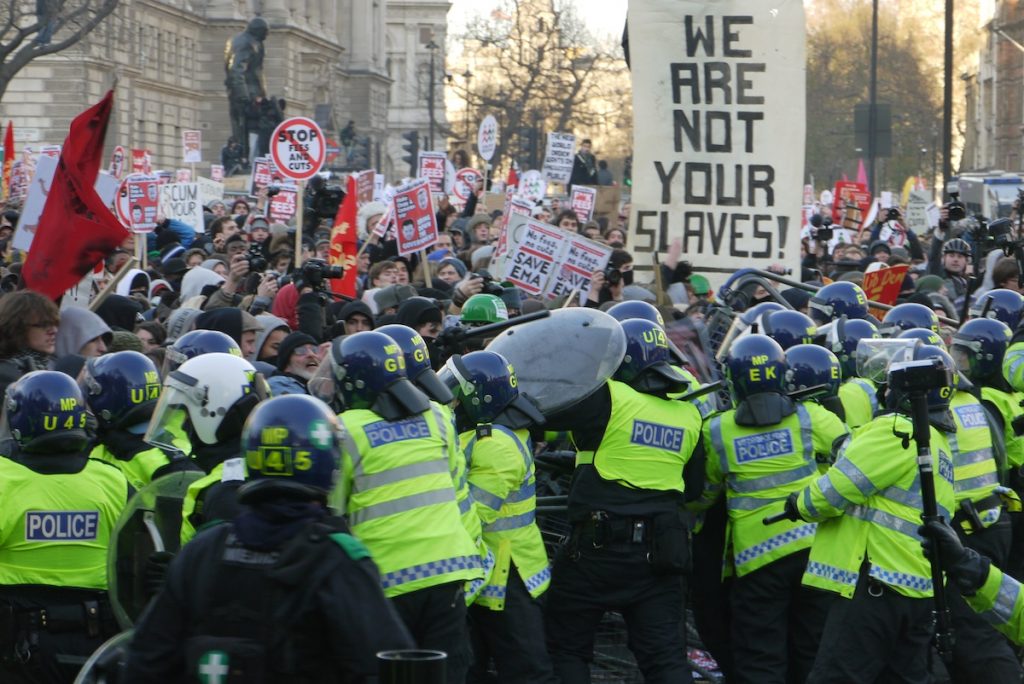 This piece, authored by Harry Garret ’16, appeared in the Fall 2013 print issue.

In December 2010, a humble Tunisian street vendor, Mohamed Bouazizi, walked into busy traffic in front of the local governor’s office, doused his body in gasoline, and burned himself alive as a display of civilian resistance against government brutality. Although Bouazizi died of his wounds, his sacrifice sparked nationwide protests in Tunisia that ultimately led to regime change. Many believe that this marked the start of the Arab Spring, as shortly after these mass demonstrations, similar protests began across the Middle East. Though the path to revolution was unique in each country, many of the movements inevitably turned violent as governments aggressively attempted to quell dissent. By March 2011, governments had responded to popular uprisings in one of two ways. In countries like Saudi Arabia and Morocco, governments took note of public sentiment and made internal reforms to appease protestors. While the effectiveness of these peaceful concessions is debatable, such a process was far healthier for the stability of each state than the highly militant approach of the Egyptian and Libyan governments. Why, then, do Syria, Turkey, and other authoritarian states ignore these examples and continue to use violence to silence reform efforts? The decision to engage in violent repression is highly complex and inherent to the political landscape of each country, but there are a number of objective reasons for a government to choose violence over peaceful negotiation in addressing public dissent.

Despite arguments that a regional democratic shift sparked by the Arab Spring could ultimately influence other parts of the world, 2011 actually saw global levels of freedom decrease as authoritarian governments realized potential public opposition. China and Russia continued to enact policy that was repressive to their home populations, and issued propaganda that shunned the Arab protests. The Syrian government, which was experiencing mass protests of its own, killed around 5000 activists and tortured and imprisoned thousands of others within just the first few months of demonstrations beginning. Ultimately, government repression can manifest itself in a multitude of ways: the censor of communication channels, national threats, property seizure, economic impediments, limitations on free speech and public demonstration, illegal arrests, and physical violence against protestors. According to Jonathan Sutton of the University of Otago, these tactics are often ranked from “less severe,” where governments limit free speech and spread propaganda, to “severe,” where bodily harm is dealt to the citizenry.

In many scenarios, government leaders miscalculate the extent of public opposition and the strength of an aggressive counterbalance by non-government forces. The best outcome for the state is to eliminate public dissent while not succumbing to reforms. To leaders, the most rational and common choice in acquiring these interests is to remove activists from their population and instill fear in the rest of society to prevent the opposition’s sentiments from spreading. This response seems even more appropriate during the beginning of a rebellion, where rebel groups are extremely weak and an asymmetric conflict would most likely result in a regime victory. If rebels can survive the first several months of a conflict, their odds will gradually increase as they begin to control rural areas and move towards highly populated urban sectors. This situation incentivizes the military to become extremely violent due to the costs they would incur from engaging in a full counter-insurgency operation.

Political leaders’ perception of opposition groups’ strength is one of the most important factors in deciding state response to a movement. Because highly repressive strategies can have costly implications – such as economic hindrance and public derision of government elites – states must believe that protestors lack power to resist aggressive retaliation. The weakness of these groups is usually defined by each group’s marginalization: the more disconnected a movement is from the consensus of society, the less likely it is that they gain widespread support. According to Jennifer Earl, writing in Sociology, these groups tend to be part of marginalized racial and ethnic minorities, religious minorities, and the impoverished. Targeted groups also tend to lack key resources that would ordinarily expand support for their causes. For example, a group might lack neutral media coverage, and are instead ostracized for their beliefs on state-run television while harsh government responses remain hidden from public view.

The political structure of a government is also a significant factor in determining whether a state will attempt to violently repress uprisings. In their book Rethinking Violence States and Non-State Actors in Conflict, Erica Chenoweth and Adria Lawrence note that violent repression often occurs under authoritarian governments, who believe excessive force to be a justifiable means of controlling populations. Violence is likely to escalate under these systems for several reasons. Typically, leaders in authoritarian governments discount the importance of the public in sustaining an efficient and stable government. From this perspective, their populations are weaker than those of democracies, in which citizens have more political power. Ultimately, this results in authoritarian leaders taking aggressive action – including killing protestors –  to sustain their power. Moreover, political leaders in authoritarian states can lose control over their bureaucracy, which can heighten the amount of violence perpetuated by the government. According to David Cunningham and Emily Beaulieu in “Dissent, Repression, and Inconsistency,” the security forces that are sent to diffuse situations often lack adequate intelligence and training, which breeds disconnect between political leaders and ground actors. In some cases, a decision made by a single police officer or soldier, such as the decision to open fire on a group of non-violent protestors, can dramatically change the direction of a movement.

When evaluating the international landscape, many leaders have miscalculated the extent of public resistance and believe they acted in their best interest to solidify power and stabilize their society through the use of excessive force. In many cases, they did not want to concede power to the people and potentially rearrange the political landscape of their country. Instead, they set a match to a bundle of protests that spread throughout the nation, inducing the very changes that they so aggressively tried to prevent.