The Result of the Warsaw Climate Negotiations: Climate Inaction? 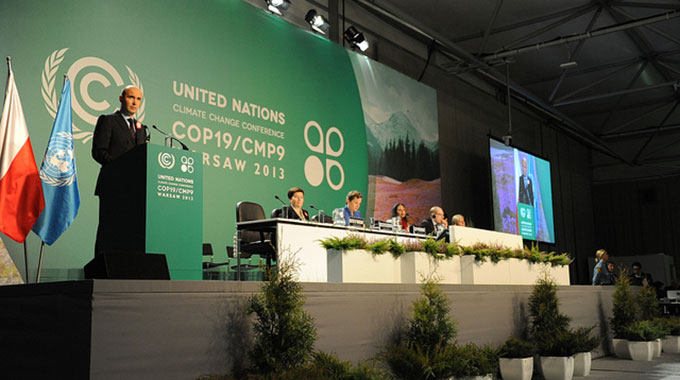 Over the past couple of weeks, the United Nations Framework Convention on Climate Change convened in Warsaw, Poland to make progress toward reducing global carbon emissions. Anticipating the 2015 climate talks in Paris, the Warsaw discussions fell disappointingly short of any substantive development toward a long-lasting plan to implement emissions reductions. Despite some minor achievements, the negotiations were nearly inconclusive. While some progress was made in light of the 2015 Paris climate conference, the Warsaw discussions highlighted the increasing gap between the Western developed nations and the fast-emerging economies of the developing world—a divide that threatens, much like the Republican-Democrat gridlock in the United States Congress, to hinder much-needed cooperation regarding climate protection.

Despite generally lackluster results, the conference did produce some progress toward future climate cooperation. Negotiations ran into the wee hours of Sunday, November 24, and successes included a “Warsaw international mechanism,” by which developed countries will provide financial assistance to people affected by environmental disasters, and a plan to reduce deforestation and therefore cut carbon emissions. The deforestation plan, called REDD+, is perhaps the most tangible success of the conference, for it aims to keep the world’s forests intact and reduce carbon emissions. According to The Washington Post, Norway, the United Kingdom, and the United States have together promised $280 million toward this plan. Finally, the conference’s overarching result committed the present countries to publicize their carbon reduction plans by the first quarter of 2015. However, the plan is more of a stand-in for achievement produced by the negotiations at the conference, for the commitment stipulates that only countries that are “in a position to do so,” according to The Washington Post, must announce this carbon reduction plan. It seems, to the grand misfortune of environmental progress toward emission reductions, that only the countries that feel like pledging their support for environmental improvement will comply with the Warsaw conference’s agreement.

The vague, noncommittal language of the Warsaw conference agreement seems more of a collective decision to avoid criticism of failure to make strides toward the 2015 Paris climate talks rather than actual cooperation to cut global carbon emissions. However, such collective efforts to improve the environment and global air quality are of the utmost importance, for according to a study in the Nature Climate Change journal, paraphrased in an article in The Guardian, procrastination to cut carbon emissions “would result in faster global warming.” It seems, though, that the developed-developing countries’ tension regarding responsibility for emissions reductions will greatly halt progress toward truly global cooperation. The notion that the word “commitment” to an international deal to reduce carbon emissions was switched to “contributions” represents a disappointing shift to mere rhetoric of international support for taking action to protect global climates. This setback, among others, is due to discord between the developed and developing worlds, largely driven by reservations held by China and India. Holding strong to the antiquated notion of the 1992 United Nations “convention on climate change” that holds only developed countries accountable for reducing carbon emissions, China and India largely slowed progress toward agreement. Additionally, China, according to The Washington Post, is hesitant to pledge support for emissions cuts because of its high energy needs—70% of which are satisfied through coal.

Despite the expiration of the Kyoto Protocol in 2020, the upcoming talks in Peru in 2014, and the growing need for some plan to change the rate of environmental damage, the Warsaw climate talks produced little except to highlight the widening divide between the goals of the industrialized and the industrializing countries of the world. As the developing world industrializes and increasingly has greater energy needs, international need to abate carbon emissions grows ever stronger. Nonetheless, the tension between the developed and the developing worlds over the responsibility and the ability to meet such environmental standards will only mount in the coming years, as the Warsaw climate conference has shown