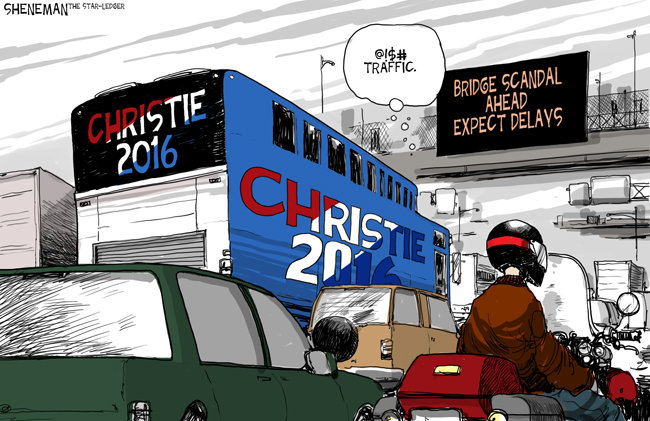 As Chris Christie recently found out, when you’re a governor with national ambitions, even a local traffic jam can come to bite.  This fiasco – now being termed “Bridgegate” – has exacerbated Christie’s image as a bully, with potential consequences on the national stage.

On September 9, 2013, two of three local access lanes from New Jersey commuter town Fort Lee to the George Washington Bridge, the world’s busiest bridge and the main connector between New Jersey and New York City, were suddenly and inexplicably diverted to highway traffic. The move led to standstill traffic in Fort Lee, causing up to a four-hour delay for NYC commuters. Children were late for their first day of school, and emergency workers could not properly respond to the day’s events. The parking-lot-like conditions in Fort Lee did not subside until four days later when the lanes were re-opened.

Now, what does all this have to do with Chris Christie? The George Washington Bridge is run by the Port Authority, a joint agency between New York and New Jersey. Along with New York governor Andrew Cuomo, Christie is in charge of making political appointments for top positions as the Port Authority. It has recently come to national attention that two of Christie’s appointees, David Wildstein and Bill Baroni, ordered the lane diversions under the pretense of performing a traffic study. I say “pretense” because they failed to inform their boss (Patrick Foye, the Port Authority’s Executive Director and a Cuomo appointee) of the “traffic study,” forced the bridge crew to hide it from others in the agency, and did not even notify the mayor of Fort Lee and the town’s police and ambulance crews, as traffic study procedure would dictate. Robert Durando, the manager of the Bridge and the man ordered to execute the lane closures, testified that in 35 years at the Port Authority, he had never heard of lanes being closed for a traffic study. Foye did not even find out about the closures until a traffic columnist called him four days later to inquire; he immediately ordered the re-opening of the lanes.

Although it would reflect on Christie and his appointees badly enough, this debacle is not simply a case of incompetence. It is being condemned as political retribution on Christie’s behalf. Baroni, a political ally and Christie’s main man at the Authority, and Wildstein, a high school buddy of Christie’s, have been accused of creating the traffic jam to get back at Fort Lee’s Democratic mayor Mark Sokolich for not endorsing Christie in his November gubernatorial re-election bid. A number of Democratic mayors, including those of most Hudson River crossing towns, had already endorsed Christie at that point, but Sokolich chose not do so for personal reasons. Although Christie was predicted to win in a landslide (he ended up winning by a 22-point margin), he was seeking to get as many Democratic mayoral endorsements as possible, particularly in New Jersey’s heavily Hispanic and black Northeastern corridor, presumably to demonstrate to the country (and Republican National Committee) his cross-party and cross-race appeal for a potential 2016 presidential run.

Both of Christie’s henchmen have resigned as a result of this act of vengeance, claiming that it has become a “distraction.” Christie has accused the media of blowing the incident out of proportion and even went so far as to joke that he was the guy moving the cones. NJ state Democrats have launched an investigation into the affair, having already subpoenaed the two men, but it seems unlikely that they will find a connection to Christie. He is too smart to have ordered the whole thing for retribution, and even if he did, Baroni and Wildstein will do all they can to shield the governor.

Regardless, this whole incident reflects badly on Christie for having appointed men that carry out his dirty bidding in the Port Authority (not to mention, Wildstein was appointed to a new and nebulous position – clearly a result of political favoritism). For a man who is often seen as too aggressive and bigheaded (too “Jersey”) for a presidential nomination, Christie has been particularly arrogant and contemptuous in response to the controversy. The fact remain that no credible reason has been provided for the lane closures, leaving the country to view it as either a case of vengeance or intimidation toward Sokolich. And, to be sure, this is a national issue. The U.S. Department of Transportation, at the behest of U.S. Senator Jay Rockefeller, has begun an investigation, and the issue has been covered by major media sources, including Politico, CNN, and the New York Times, as would be expected of a national figure and potential presidential candidate. The presence of this unaccountable event in Christie’s past, in addition to a host of other accounts of petty retribution, will surely be brought up during his presidential campaign and will aggravate his image as a derisive bully and dirty politician – not the kind of man many people want to see as President of the United States.