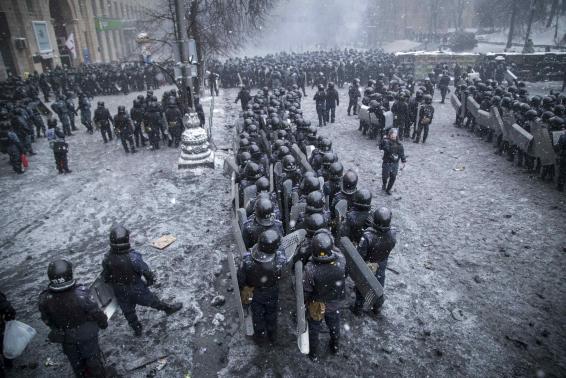 What began in December as peaceful protests against Ukraine’s decision to remain detached from the intimate economic relationships of the European Union has escalated into a series of violent conflicts and riots that have now resulted in two deaths as of January 22. President Viktor Yanukovych was able to delay the December angst for a few weeks via the appeasing force of a kind of financial bailout package from Russia that totaled $15 billion. While Russia’s financial aid eased the economic woes of Ukraine’s citizenry, the pro-EU forces revived their passions in January, only to be met with government backlash directed by President Yanukovych’s Party of Regions. Approving a series of laws that seriously infringed upon the fundamental civil liberties guaranteed by democracy such as the freedoms of speech and of assembly, the Ukrainian government directed its legislative action to put an end to the Kiev protests. However, the legislative measures were a total failure, inciting the strengthening of the opposition and creating new purpose for the protest movement. Through the use of authoritarian-style measures of force, both physical and legal, the Ukrainian government can no longer be considered democratic. If Ukraine’s protests were to escalate further, the ensuing violence would threaten the long-term stability of the present governance system and would ring of Arab Spring chaos by a people dissatisfied with the heavy-handed leadership.

Kiev’s Independence Square and the protesters within have been the targets of the President’s legislative restrictions on key civil liberties. Baited by the near two-month-long demonstrations refusing to budge from the square, the government’s recourse was the extreme limitation of the protesters’, the media’s, and active nongovernmental organizations’ activities. Repelled by the tents that have cropped up in the country’s capital, the government enacted an anti-tent law that seems the reaction of the leadership, keen on protecting its own power at all costs—those costs being fines and jail time for its citizens if they fail to comply with the new legislation. However, the government’s undemocratic measures extend further than their recent legislation. Harnessing the power of technology, the government sent warning text messages to those within close geographic proximity of the protests, portentously declaring their dislike of the protesters’ presence. President Putin of Russia, the friendly comrade of President Yanukovych, seems more than invested in the outcome of the Ukrainian protests. Many Ukrainians fear that his economic involvement in December and his influence upon President Yanukovych signal the commencement of an authoritarian era in Ukrainian governance. Reacting against the possibility of a Big-Brother-esque shift in their governmental structure, the protesters have demonstrated their recourse to violence—a signal of the deterioration of Ukrainian democracy.

The weakening of the democratic principles of the Ukrainian government has been swift. A mere two days after the passage of the anti-protest laws, peaceful protests resumed on January 19th. Interestingly, the course of events has vaguely resembled the June 2013 protests in Turkey—where violence escalated in the face of government oppressiveness by Prime Minister Erdogan. Reminiscent of Turkish calls for adherence to democratic principles, the Ukraine protests call into question the emergence of a similar, more large-scale movement inspired by the Arab Spring.

Due to Russia’s involvement in the region, Ukraine is a potential harbinger of future Eastern European instability. However, the Ukrainian protests have not grown to nearly the size of the Arab Spring protests—they remain concentrated at a much smaller scale at the moment, for Ukraine is one country as opposed to the many that quickly joined the Arab Spring bandwagon. While the term Eastern European Spring seems a premature label for the instability caused by Ukraine’s protests, the term may not be so far off. Russia’s assertiveness and creeping aggression in the region demonstrate that the potential for further violence remains a possibility. The unlikely possibility of a wave of uprisings in Eastern Europe seems a far-off prediction. However, the similarity between the catalyst of disgust with the government’s disregard for key civil rights of the Arab Spring movement in mid-January 2011 and the present Ukrainian protests in Eastern Europe in mid-January 2014 is just too striking to ignore. An Eastern European Spring? Probably not, but the resemblance to the Arab Spring protests is there. Russia’s involvement in Ukraine and with the ruling party will be awaited with hesitancy as Ukraine’s protests become increasingly violent. As quoted in a New York Times article, Russian Foreign Minister Sergey Lavrov said, “It seems someone is interested in this chaos.” That someone, very likely, is none other than Russia and President Putin, eager to solidify his influence in the Eastern European region. Euromaidan, as the Ukrainian protests have been dubbed, tests the democratic principles of the nation and calls into question the extension of the Arab Spring ideals into Eastern Europe.