The Effectiveness of Mexican Vigilantes 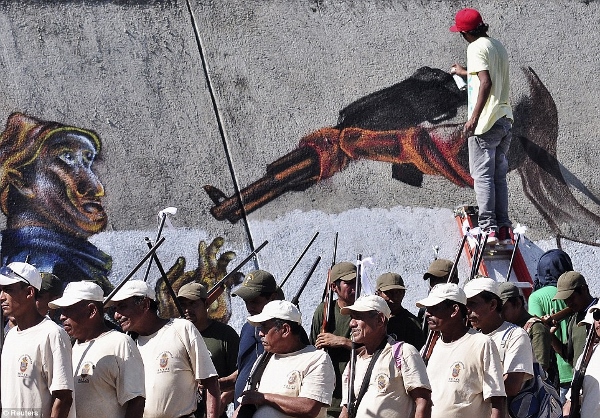 The drug war in Mexico has destabilized the country, killing over 60,000 people and breaking down the central authority of the Mexican government. Since 2006, the government, along with support from the United States, has spent significant resources to remove drug cartels from their strongholds throughout the country. While government forces have seen some success against the traffickers, there have been serious setbacks for them, specifically the cartels’ complex networks and police corruption. However, over the past several months, significant gains have been made against the cartels due to the actions taken by local armed vigilante groups that have started out of frustration against the government and traffickers. Originally, these groups were isolated to the region of Michoacán, but they have spread to 13 states throughout Mexico. Many of the individuals involved in the vigilante groups are everyday citizens, initially creating the groups to patrol their neighborhoods and then ultimately adopting more cohesive, offensive tactics to disrupt cartels’ power.

These self-defense groups have also been targeting police corruption, which is seen to be a major inhibitor in removing the cartels from their strongholds. In many cases, police throughout the country are provided monetary incentives to ignore drug smuggling operations. In response, vigilante groups have begun arresting police officers they deem as corrupt when they enter towns to liberate from cartel control. Over the past several years, the government has viewed the groups as a potential destabilizing force that could create even more chaos throughout the country.  The government argued that they instill violence within its citizens, leading to new criminal organizations that would gradually erode the quality of life across Mexican society. In order to counteract this affect, the government made significant arrests of vigilante members, arguing that they were working for drug traffickers and spreading violence to civilians.  Instead of the vigilante groups, the administration of Peña Nieto pushed for the creation of highly trained police force that solely targets the cartels, which still hasn’t come to fruition.

However, over the past several months the relationship between the government and vigilante forces has changed significantly, as these self- defense groups have become very effective against the cartels. One vigilante group in particular has reduced one of the most powerful cartels in Mexico, the Knights Templar, and is moving into their stronghold city of Apatzingan relatively soon. In response to this success, on Monday, the government recognized the effectiveness of the vigilantes by signing an agreement to incorporate one of the groups into a rural defense command under the army. While they believe vigilante groups acting with total autonomy in the country is detrimental, the government recognizes that these groups can be very powerful if they can fall under some accountability to the state.