The End of Democracy in Egypt? 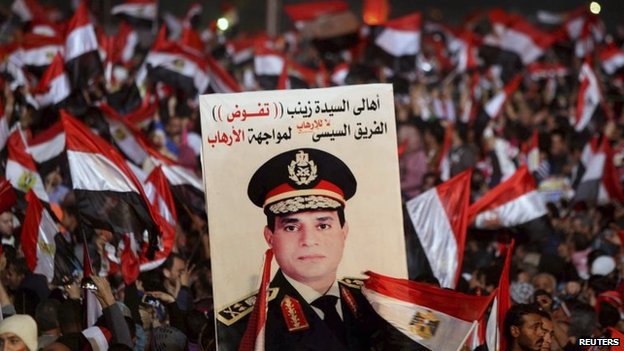 In 2011, during the Egyptian revolution that toppled Hosni Mubarak’s regime, the Egyptian military pledged to make way for a civilian democracy. Now, three years later, Egypt is well on its way to establishing another military-backed regime under Field Marshal Abdul-Fattah-el-Sisi. The interim government’s vengeful prosecution of the Muslim Brotherhood and President Morsi, as well as its willingness to step aside for Field Marshal Sisi, suggest that the Egyptian experiment with democracy could soon fail.

There is perhaps no greater indicator of impending failure than the fate of Mohammed Morsi, Egypt’s first democratically elected president. Field Marshal Sisi ousted him on July 3, 2013, after assuring the public that the armed forces were “first to announce their need to remain distant from political action.” Sisi claims to have intervened to protect the people’s revolution, yet as a result the first freely elected president of Egypt stands on trial for his life after being forcibly removed from office.

Morsi stands in four separate trials, including charges of fraud, espionage, and murder. Evidently, the judiciary seeks vengeance for “a very ill-advised struggle for power between the Brotherhood and the judiciary while the Brotherhood was controlling the presidency.” Due to Morsi’s role as the chief figure of the Muslim Brotherhood, the interim government appears determined to make an example of him.

In fact, the interim government and the military are cracking down on all members of the Muslim Brotherhood by declaring the group a terrorist organization. It is important to note that the U.S. does not recognize the Brotherhood as such, and it does not support Egypt’s crackdown on the organization.

Despite the brutal suppression of the Brotherhood, many Egyptians have faith in the Egyptian military and believe that it alone can restore order to Egypt. Indeed, many Egyptians view Field Marshal Sisi as a hero, and state and private news media have even hailed him as a national savior.

With Sisi at the helm, though, it appears as though Egypt is destined to revert to autocratic rule. The public stood by as the military toppled the country’s first freely elected government under President Morsi and then proceeded to crush the Muslim Brotherhood. Now they cheer that “The military and the people are one hand.” Unfortunately, it appears as though Egypt’s public would rather support a military regime than an independent civilian democracy.

However, one can certainly understand the public’s disapprobation of and anger toward the civilian government. Terrorist attacks have rocked the nation, undermining an already shaky economy. Samer Shehata, a University of Oklahoma political scientist, has declared that Egypt’s precarious economy “eventually will be the undoing of anyone in [power], because all the same issues that led to the 2011 uprising are still there — the youth unemployment, their marginalization from politics, the overly bloated Civil Service, the unsustainable food and energy subsidies.”

Perhaps Field Marshal Sisi, then, is the best candidate for president, as he can restore order to the nation with the military at his back. Perhaps he can even overcome the aforementioned obstacles and stabilize the Egyptian economy. Yet, considering Sisi’s presidential aspirations “the next stage of [Egypt’s] development” toward democratic government, as Tony Blair suggested, ignores Egypt’s history of autocratic, military regimes.

Placing power back in the hands of the military and depending so much on the military to maintain order undermines any attempt at establishing a legitimate civilian democracy. Additionally, crippling the democratic process by eliminating opposition groups like the Muslim Brotherhood will only further impair Egypt’s ability to maintain a democracy, as democracy depends on opposition parties.

Thus, the comforting promises of peace and order that the military offers can only hearten Egyptians for so long. Given time, the burdens of an autocratic, military regime similar to Hosni Mubarak’s will emerge to beset the Egyptian people. They have endured so much violence and death to secure democracy and to give themselves a political voice. Hopefully, the rise of Field Marshal Sisi will only mark a small misstep, though perhaps a necessary one, on a greater path to a stable civilian democracy in Egypt.