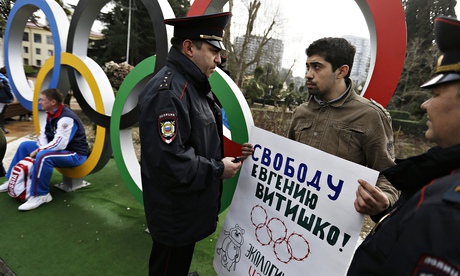 “If the freedom of speech is taken away then dumb and silent we may be led, sheep to the slaughter” – George Washington

With the world’s eyes on Russia these past couple of weeks during the Sochi Olympics, President Putin and the Russian government have come under fire for their harsh laws regarding gay rights and freedom of speech. Russia recently passed a law making it illegal to spread gay or lesbian “propaganda,” and gay hate crimes have been on the rise in Russia for the past couple of years. Additionally, the world has watched members of the punk band Pussy Riot imprisoned and even beaten  for protesting these laws and Putin himself during the Olympics. The United States, as well as many other countries, has condemned Russia’s denial of freedom of speech, and many athletes have refused to take part in the Olympic games because of Russia’s harsh laws. Actions such as the denial of human rights in Russia show that even though modern Russia is a representative democracy, it shares many qualities with the former Soviet Union, which was notorious for its corruption, censorship, and limitations on human rights.

After the Communist Revolution in 1917, the U.S.S.R.  accumulated the largest collection of banned publications in the world. Additionally, it established a central censorship office that was directly attached to the Council of Ministers. Publications that were anti-Bolshevist or Anti-Leninist were targeted, as well as individuals voicing opinions that were against the regime. Russia today has taken steps to censor material that sheds poor light on the government. Putin has used his influence to control how he is presented in the media, and, as seen through the imprisonment of the Pussy Riot members, anyone who speaks out against him faces jail or heavy fines. Putin has announced his desire that “the participants, guests, journalists and all those who watch the Games on TV and learn about them from the mass media to see a new Russia, see its personality and its possibilities, take a fresh and unbiased look at the country,” however the media, especially the local Russian one, covering the Olympics has been restricted in what it can cover by the government.

Since Putin’s reelection in 2012, Russia has taken many steps to stifle dissent among the people. A report by Amnesty International and Human Rights Watch released in 2013 claims that, “The Russian government has unleashed a crackdown on civil society unprecedented in the country’s post-Soviet history.” New laws were put in place that dealt harshly with political activists, limited the capability of nongovernmental organizations, and spread propaganda saying that government critics were public enemies. Because of this, political opposition to the current government has been severely limited, and, coupled with the suppression on free speech, has led to a near return to politics under the old U.S.S.R.

When Vladimir Putin was re elected to his third term in office, many people claimed that he had only won because of widespread fraud and corruption. Since then, Putin has been fighting to boost his reputation, however he has recently been harming his image through his strict policies regarding human rights. He has been attempting to use the Olympic games to bolster his reputation in Russia and abroad, and to do this successfully he must ensure that he is not portrayed poorly in the media. However, by restricting the media to accomplish this task he is, in effect, thwarting his own mission by proving to the world that he is not a leader with the people’s rights in mind.