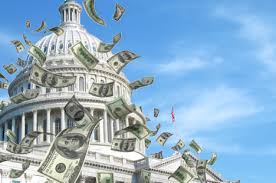 Campaign season is the time for every citizen to learn about the candidates, their positions on key issues, and their promises for the constituents. It’s a beautiful time of shaking hands, kissing babies, visiting Rotary clubs, and local town hall meetings. It’s American Democracy in its most unadulterated form. What a joke. Today, campaign season is the time for electoral math, negative ads, and cozying up to the big political donors. Campaign season is no longer a season any more; it’s a perpetual cycle of fundraising by kowtowing to potential donors, and ensuring that the main bankrollers of your campaign are happy. Money in politics is nothing new, but the indifference to the little man seems to have reached a new peak. Elections are broken because of the pervading force of money that forces candidates to start campaigns earlier and focus their efforts on building a war chest. In building that war chest, candidates look for big money donors, and leave much of the American populace out to dry.

Elections have turned out to be pretty simple in the last decade or so. In an analysis by Politifact, the candidate who raises more money in a race has a winning percentage that hovers around 90%. This figure obviously fluctuates a little bit, dipping down into the low eighties in some years and inflating into the mid nineties in other years. It doesn’t take a Political Science degree to figure out what this means, though: raise more money than your opponent and you’re very likely to win. Ultimately, it’s tough to blame candidates and campaigns for starting earlier every year. The men and women making those decisions are just doing their job of trying to get their candidate elected. The push for money is what has driven the start of campaigns back earlier and earlier, though. An October 2013 study from the Pew Research Center found that the 2016 Presidential election was already outpacing mentions of the 2008 election by 30% and doubling the chatter about the 2012 election in the same time period. The study tracked newspaper articles, too, making the stats even more impressive. There are 20% fewer newspaper stories in the aggregate than there were in 2005. Campaigning earlier can, in theory, make representatives more accountable and accessible to their constituents, but in reality, the focus on fundraising and campaigning diverts time and resources away from the actual job of the representatives: governing and legislating. Gridlock in Congress is often chalked up to partisanship, but the gridlock is slightly more complex. In pushes to get donations from SuperPACS representing interests and wealthy individuals like George Soros or Sheldon Adelson, Congressmen must politically posture themselves to garner support from these fundraising sources. Simply put, the emphasis on fundraising and long campaign season make our elected representatives perpetual campaigners, and campaigners do a worse job representing the American public in office than elected officials do.

When fishing for trout, an angler has to use a very small hook or else the trout won’t be able to swallow the hook and be reeled in. Trophy fish require very large hooks; hooks that essentially disregard any trout in the area. My metaphor is this: when politicians are campaigning, they want to catch the trophy fish like Sheldon Adelson or George Soros. If the candidate ignores a couple thousand trout like you and me along the way, then so be it. This means that the wealthy have a louder voice and are more influential in the political process. Statistics back the metaphor up. In a 2012 study of SuperPACS, it was found… “Of all itemized contributions from individuals to Super PACs, 93% came in contributions of at least $10,000. Only 726 individuals, or 23 out of every 10 million people in the U.S., made a contribution this large to a Super PAC. More than half of itemized Super PAC money came from just 37 people giving at least $500,000.” Sheldon Adelson, by himself contributed 150 million dollars in the 2012 election cycle. By throwing that type of money around, candidates listen to Adelson. I don’t mean to suggest that anything corrupt is happening, but if you call your Senator’s office, you won’t get patched through directly to the Senator. When Adelson calls any politician in the United States, he gets immediate and unfettered access to the representative. His money buys him political influence, something Adelson admits to himself, saying, “I’m against very wealthy ­people attempting to or influencing elections, but as long as it’s doable I’m going to do it.” Adelson is a big fish, and politicians are using the big hooks to get him while us trout swim silently by.