Assessing the Response to the Crimean Crisis 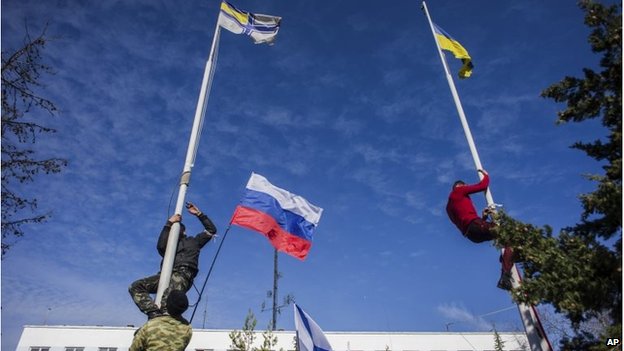 Following a controversial referendum last Sunday to withdraw from Ukraine, officials were met by cheering crowds as they reported that nearly 96% of Crimeans wanted to join Russia. Of course, the vote did not include the vast majority of ethnic Ukrainians and Tatars who boycotted the referendum, which took place under the careful watch of the newly installed pro-Russia leadership. Nor did it acknowledge the implicit pressure associated with the presence of the Russian military in the region since the end of February. Most importantly however, it ignored the global condemnation of the referendum as a violation of international law.

Equally appalling was the brash derision with which President Putin acted in pushing through the annexation of Crimea, despite the threat of sanctions as well as exclusion from future G8 meetings. Citing years of repression of Russians living in Crimea as well as lamenting the West’s efforts to restrict Russia’s international influence. Vladimir Putin’s address was met by cries of joy from Russians and angst from the international community.

Although it may be a bitter pill to swallow, the world may have to accept the results of the staged referendum. Undoubtedly, Russia’s methods are flawed, but there is a strong historical precedent for Russian presence in the region that dates back centuries. While no one (except Russia) believes this reason enough to annex Crimea, the fundamental issue remains how condemnation of the referendum will translate into action.

Military force remains out of the question; neither the United States’ people nor its leaders are interested in entering into another conflict. Furthermore, any actions perceived as aggressive will only fuel President Putin’s rhetoric. Instead, the path forward appears to be sanctions and diplomacy. However, as history has demonstrated time and time again, sanctions often serve to further exacerbate the problem rather than pressure for change.

The particular difficulties represented by Russia’s situation demonstrate why Vladimir Putin has been so cavalier in his attempts to annex Crimea. When compared to countries such as Iran, countries that represent economies on the periphery of the global market, the imposition of sanctions against nations such as Russia becomes exponentially more difficult and unpredictable. Not only is Russia far more intricately tied to the balance of global markets than countries like Iran, but it also represents a vital center of energy resources and production.

Already, it has become apparent that many Western nations, particularly those that hold considerable sway in EU decisions, will be hesitant in pursuing the stringent sanctions necessary to truly tighten the noose around Russian leadership—namely Vladimir Putin—to force him to retract Russia’s advances. For every Germany, which has stated it would bear the burden associated with implementing sanctions and possible retribution, there is a Netherlands that is heavily dependent on Russia for oil and natural gas.

With nearly $160 billion dollars in such exports to EU nations every year, it is unlikely that the EU would support sanctions that would be truly detrimental to the Russian economy. However, the effects of sanctions have not been without avail. Already, Russia’s economic outlook has weakened for the upcoming year, and the efflux of nearly $60 billion dollars in investment from Russia can be accredited to the uncertainty that the situation represents.

However, as all parties are well aware of the mutually-assured destructive capabilities of pursuing truly crippling economic sanctions, it remains to be seen how the West navigates this crisis. Increasingly, the ideas of “smart sanctions”, sanctions targeted at prominent individuals and oligarchs in President Putin’s elite circle, and visa bans seem to be the path to take, but how effective such steps will be is speculative at best. Nevertheless, if Russia’s response to such sanctions is a mocking imitation of similar sanctions freezing American lawmakers’ visas and implementing Russian travel bans, it appears clear that such toothless sanctions will create little change in the long-term.

As President Putin’s blasé attitude and blatant violations of international law continue to complicate the task of resolving the Ukrainian crisis, the countless global variables in play surely will complicate any action taken by the West. However, what remains true is that strong action must be taken. Not to prevent another Cold War, nor to incite global instability, but rather to demonstrate that the United States and the world will not stand by in the face of violations of state sovereignty and international law.