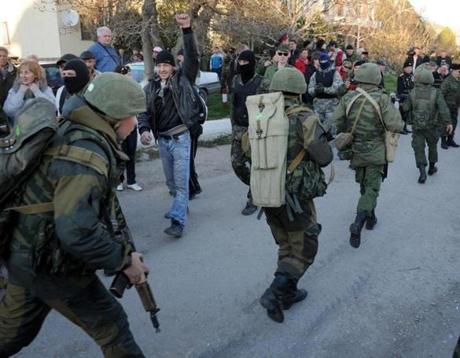 Whether the U.S. likes it or not, it has a responsibility to lead Western nations. Western Europe still depends a great deal on American leadership and influence, as the recent actions of Russian President Vladimir Putin have evinced. On Friday, March 21, Putin signed a law formalizing Crimea’s annexation, despite international outcry and the imminent threat of sanctions over his actions in Ukraine. Putin and the rest of his administration have demonstrated that economic sanctions will not deter them. In this time of geopolitical uncertainty, aptly described by the BBC as the “most significant drama to hit the Euro-Atlantic area since the end of the Cold War,” President Obama must hold steadfast to his threats of increased economic sanctions and ensure that the West presents a united front against Russia’s imperial ambitions.

Accordingly, the U.S. must be firm in demonstrating that its commitment to international law and state sovereignty does not end with rhetoric. Already, Russian officials have ridiculed the initial U.S. sanctions as worthless. Regarding his economic sanction imposed on March 24, Russian Deputy Prime Minister Dmitry Rogozin declared that, “I think some prankster prepared the draft of this Act of the U.S. President.” Russia’s dismissal of these sanctions as impertinent and ineffectual should only strengthen the West’s resolve to impose harsher sanctions that Russia cannot ignore. If Mr. Putin wants to play hardball, then the United States has to show that it can muster European support and play the same game.

Putin and his administration have clearly explained that minor sanctions will not dissuade them; in fact, Putin’s popularity actually surged to a five-year high after making Crimea a part of Russia again after sixty years of independence. At this time, with the support of the Russian people behind Putin, it is imperative that the U.S. follow through with its threat to uphold international law. If the U.S. falters and fails to convince its European allies to join in enacting harsher sanctions, Putin will have no reason to halt Russia’s expansion beyond Crimea.

Indeed, President Obama should understand this political struggle as a matter of geopolitics. As NATO has advanced eastward, edging closer and closer to Russia, Putin has only grown more confident in his view that Russia’s security and global power rely upon the assertion of political power through establishing Russian bloc states. He tested the waters with the 2008 crisis in Georgia, which saw Moscow effectively establish “two Russian-speaking protectorates carved out from Georgia-proper,” and now he has taken Crimea without any Western intervention. Moreover, Putin has little reason to end Russian expansion with Crimea, as taking over the peninsula hardly seems worth the trouble without the addition of Eastern Ukraine. With its vast region of coalmines and factories, Eastern Ukraine is a far juicier prize for the Kremlin.

With this in mind, slapping Russia on the wrist simply will not do; the U.S. must lead NATO in establishing sanctions that actually threaten Russian prosperity and Putin’s popularity. The U.S. must send a clear message that Russia will suffer more than the mere loss of pomp and prestige on the international stage. If Russia wants Ukraine, it’s going to have to give an arm, too.

However, creating such sanctions will undoubtedly be challenging, as serious countermeasures would exact a substantial economic toll on Europe. European countries depend heavily on certain Russian resources. For instance, they “import 84% of Russia’s oil exports, and about 76% of its natural gas.” Yet, President Obama has recently highlighted the importance of the U.S.-European trade deal known as the Transatlantic Trade and Investment Partnership, or TTIP, which “would ease exports of liquefied natural gas to Europe, one of the EU’s main goals in the trade talks, by smoothing the way for export licenses to U.S. firms.”

Agreements like the aforementioned trade deal are imperative to bringing the EU into the fold and ensuring that Russia is contained. The combined strength of the United States and the European Union could demonstrate to investors worldwide that Russia is economically unstable and politically isolated, dramatically influencing the Russian economy and stock market. It’s time to show President Putin that the United States and its allies will stand firm and punish Russia for its actions. Without a clear demonstration of unity and a willingness to accept short-term costs, the West will show Russia a weakness that Putin will not hesitate to exploit. Indeed, at this vital juncture in European geopolitics, it is time to think about the fate of all of Ukraine before Putin annexes more territory.