A Tenuous Union: Catalonia’s Campaign for Independence from Spain 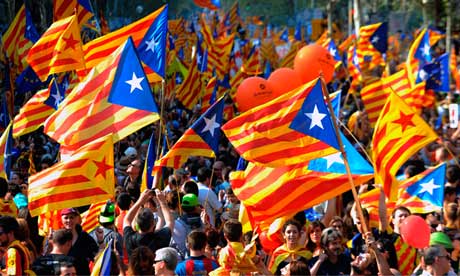 In the wake of the Scottish referendum on independence from the United Kingdom—which, as voters demonstrated a week ago, was unsuccessful—a similar nationalist sentiment prevails in the Catalonian region of Spain. While at the present considered illegitimate, Catalonia plans to hold a referendum deciding the region’s independence on November 9th of this year. Nonetheless, the Spanish region’s passion to break away from Spain cannot translate into an analogous referendum to that of Scotland. In fact, the ground on which the pro-independence movement in Catalonia stands is nonexistent without a motion upholding the referendum’s legitimacy by the national Spanish government. While United Kingdom Prime Minister David Cameron recognized the right of Scotland to decide the fate of the region’s self-government or continued union with the crown, Spain’s Prime Minister Mariano Rajoy has indicated to Catalonia that they will have no such luck in receiving a respectful nod from the central Spanish government that the vote is recognized. In fact, the issue appears to have devolved into one of constitutional rights, and if Artur Mas of the Catalonian government gives the go-ahead to place the referendum officially on the calendar, the Spanish national government plans to throw the referendum into the constitutional courts. Despite a prevailing desire in Catalonia for independence from Spain, the cultural and economic reasons that the pro-independence supporters tout are weightless without the seal of approval from the reluctant Spanish government, and an independent Catalonia could spell economic disaster for Spain.

As stated in an article in The Boston Globe, the vote on Scottish independence represented a decisive affirmation of the principles of democracy put into action, resulting in a peaceful outcome. According to the article, “Though England had everything to lose, Prime Minister David Cameron and his government allowed the referendum to go forward.” However, the Catalonian situation is completely different, and their vote would be weightless without Madrid’s approval. A Catalonian referendum, while violating the Spanish constitution’s text that states in principle, as according to an article in The Guardian, “that any kind of vote on independence must be put to all Spaniards,” would amount to a unilateral declaration of self-government with no real constitutional legitimacy nor pull in the international community. If Catalonia is to hold a vote through a referendum at all, it should do so only at the behest of government approval. However, in the unlikely event that the Spanish national government will grant the Catalonian government this desire, a referendum would only serve to underline the tenuousness of the union in Spain. As a Slate article points out, “the results [of the referendum] will be non-binding, seemingly making the vote something of an elaborate opinion poll.” Resulting unrest regarding the illegitimacy of the referendum will only engender further displeasure in the Catalonian region, one that is better served in the international community by its union with the rest of Spain.

Economically, Catalonia’s importance to the entire country of Spain cannot be underemphasized. In fact, the region is one of Spain’s most economically productive regions, comprising 20% of the country’s gross domestic product. Still, despite the fears of the central government in losing such an economically significant region, Catalonia’s uncertain future with regard to its place in the European and international communities is perhaps more important to consider before it moves ahead with an illegitimate vote on independence. This nationalist sentiment in the Catalonian region of Spain—like that of Scotland—seems to go against the fundamental principles of the European Union, deeply rooted in integration at the expense of some forms of national autonomy, as indicated by its very name. The result? Without Spain’s approval of the referendum, going ahead with an illegitimate vote on independence in Catalonia would only engender further tension and uncertainty. Waiting for a compromise—whatever that may be—is likely to produce the most satisfactory result for both Spain and Catalonia.