2014 Gubernatorial Elections: A Race to Remember 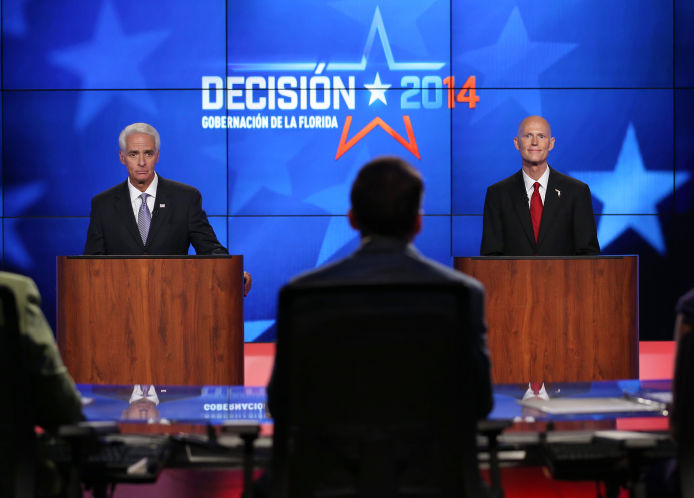 Forget Senate midterms. History is in the making in the gubernatorial elections.

This year nearly half a dozen incumbents are in the fight for their lives, and the competition is stiff all around. Since 1984, when six incumbents were ousted, only 34 governors have lost their seats in the general election, with one or two falling out every year. Competition isn’t cheap this year, either; Republican and Democratic hopefuls have spent roughly $58 million more on ads than their counterparts vying for Senate seats. Polls are telling us it’s going to be a tough victory in several states this year, but it’s possible that we might be watching the fomenting of a political massacre.

Pennsylvania Gov. Tom Corbett (R) is well on-track to lose his spot to Democratic hopeful Tom Wolf (D) – virtually every poll in the state shows Wolf as the favorite. Corbett hasn’t had a stellar term thanks in part to some major gaffes, including a porn scandal that ran right under his nose and some unfavorable quips comparing same-sex marriage to incest. With Corbett trailing anywhere from 7 to 15 points behind in recent university polls, Wolf hardly needs to worry about this one. The only concern for Democrats is turnout – in a traditionally red state like Pennsylvania, GOP voters are typically more likely to make it out to the voting booths and could potentially swing it with a big enough turnout.

Rivals Mike Ross (D) and Asa Hutchinson (R), both former Arkansas representatives, are in a similar pickle as they hope to snatch up the seat as Governor Mike Beebe steps out. Though state Democrats are hoping for Ross to fill Beebe’s shoes, it’s looking more and more like the fiscally conservative Hutchinson will take the lead. Ross trails Hutchinson roughly 6 points as of the most recent polls in what will probably be the only major Republican victory in the gubernatorial elections.

Maine is a slightly less predictable race this year. Incumbent Gov. Paul LePage (R) is battling two opponents, Democratic candidate Rep. Mike Michaud and independent candidate Eliot Cutler. LePage’s approval ratings are drooping significantly and Maine voters have made clear their disapproval, but the inclusion of Cutler could very well doom progressive voters like it did back in 2010. Current polls show Michaud and LePage within a point of each other with Cutler trailing neatly behind, so it’ll be a close one.

Connecticut Gov. Dannel Malloy (D) is running a repeat race this year. Back in 2010, Malloy ran against Republican Tom Foley following Jodi Rell’s departure from office. The race was determined by less than half a point in favor of Malloy, who raked in the votes from Connecticut’s deeply blue urban areas. Through the campaign season, Malloy has had success in aligning himself with Obama on a number of issues, but his ratings have suffered following Obama’s response to the Ebola crisis and his subsequent failure to deliver a campaign address in Bridgeport. Malloy might have an edge over Foley in a predominantly blue state, but recent polls show Malloy a solid seven points behind Foley.

In one of the more unusual campaign cycles of this election season, Illinois Gov. Pat Quinn (D), who fell far behind opponent Bruce Rauner (R) in early polls, has suddenly bounced back in the last month, edging almost two points ahead of Rauner as of the most recent polls. Rauner was expected to clean up the election, considering that Quinn has had a rather controversial term, but his unabashed stance as a pro-business billionaire and some rather telling gaffes (including one in which he revealed that he belongs to a wine club with a $150,000 initiation fee) have led to his decline. So, what was thought to be an easy pick-up for the GOP has turned into one of the closest, most unpredictable races of the season. However, polls have turned up a rather substantial number of undecided voters, and in a solid blue state, that could spell trouble for Rauner.

By far the most talked about race is a toss-up for the Florida seat between incumbent Gov. Rick Scott (R) and former governor Charlie Crist (D). Scott’s popularity in Florida has been suffering recently, and Crist, newly affiliated with the Democrats after abandoning the Republican Party in 2010, has seized the opportunity to make his comeback. Crist, however, has been met with criticism over an unusual but highly publicized incident last week in which he arrived late to a debate when it was unclear whether or not he could have a fan on stage. Last night’s debate, the last of the season, was vitriolic and indecisive, at best; ad hominem attacks and extensive name-calling obscured the true victor. As of the most recent polls, Scott and Crist are essentially tied, and with the most recent events it’s sure to be a tight race.

While it’s starting to look more like the Democrats will have the upper hand in the upcoming gubernatorial election, the gaps between opponents are inching closer together, making predictions nearly impossible. November 4th will be a big day for political history, nonetheless, and most of these ultra-close races will likely come down to turnout. In this big money, high-stakes election season, who will emerge victorious? The answer to that question has never been more unclear.