Russia the Invincible? The Disconnect Between Putin’s Perception and Reality 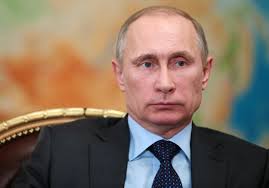 While Western-imposed sanctions are taking an increasingly negative toll on the Russian economy, it appears that President Vladimir Putin is more affirmed of his hostility toward the country’s old Cold War-era foes. And yet, despite rhetoric lambasting the West for imposing sanctions, which, from Putin’s perspective constitute “a gross violation of human rights,” he also dismisses the idea that the sanctions “will cause negative effects or catastrophic consequences only for us.” Indeed, he remained resoundingly confident that, “No such thing will happen!” If the disconnect between President Putin’s rhetoric and the reality of a worsening economy in Russia continues, it is unlikely that Russia will be able to support its position of hostility toward the West for much longer. Indeed, Putin’s rhetoric will have no meaning if the Russian economy continues on its current path, and Western sanctions may have just the desired effect of forcing Putin to acquiesce to changing his behavior.

Evidently, there’s a disconnect between the reality of the worsening economic situation in Russia and Putin’s perhaps distorted view of his control over the stability of the economy. Indeed, Putin’s rhetoric suggests that he considers Russia more a victim of other countries’ actions rather than the misguided aggressor that much of the world—as evinced through sanctions—feels is drifting too far from the realm of reasonable international political behavior. Precisely through such statements as, “We realize the malignity of the ‘Iron Curtain for us, and nobody is going to build a wall around us,” Putin is constructing a worldview for Russia in which the rest of the world (i.e., the West) is playing the role of actor in reviving Cold War animosities. From Putin’s perspective, if a renewal of twentieth century animosities between the West and Russia were to occur, Russia would be the victim of an aggressive West that was trying to break the country through misdirected sanctions. Not to worry, though, says Putin, for Russia’s actions—such as annexing Crimea—remain grounded in “strategic decision[s].”

Certainly, Putin’s worldview of the Russian position on the global political stage is much different than that perceived by much of the world. From the West’s perspective, annexing Crimea and the sanctions that followed were a necessary consequence for an unprecedentedly and unacceptably aggressive Russia, whose actions no longer fit with the paradigm of international diplomacy.

Amid Putin’s high level assurances of Russian strength, the economic situation for the average Russian is increasingly grim. Both the value of the rouble and the price of oil have dropped, and according to an article in The Economist, projections for the next two years foresee no economic growth. The article also points out that despite what some saw as “an attempt [“the Ukrainian conflict”] to shore up through patriotic fervor the support that president Vladimir Putin can no longer buy by boosting living standards,” Russians’ worsening ability to sustain the poor economic reality for the country will quickly turn the tide in popular support for President Putin’s rhetoric regarding standing strong against Western action, predicts the article.

As both the reality of the economic situation in Russia becomes clear and the country is reminded that political hostilities are less of a priority than day-to-day economic necessities, President Putin will ultimately be forced to cave. Both his rhetoric and his actions on the international political stage will have to be tempered under the pressure of Western sanctions. A disconnect in reality and rhetoric can only last so long. Despite Putin’s assertion that “When a Russian feels he is right, he is invincible,” the Russian economy cannot remain completely strong against Western punitive measures. Perhaps the sanctions, at least in the near future, will begin to have exactly the effect that policy makers desired.