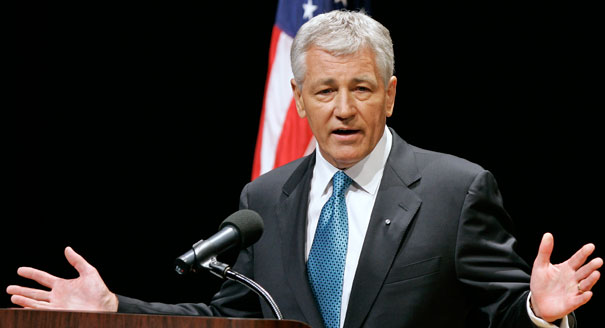 With rising tensions in Russia and the Ukraine, the presence of ISIS in Syria and Iraq, and failed negotiations with Iran, President Obama’s national security team faces intense scrutiny.

Republican and Democratic leaders have both criticized the members of the national security team and advised the president to make some major changes.

This summer Senator McCain called for the resignation of General Dempsey, the Chairman of the Joint Chiefs of Staff, because of the lack of security in Iraq and the increasing threat of ISIS.

Hagel’s resignation probably was not the change that Senator McCain had hoped for, as Hagel was the only Republican in the president’s cabinet.

Secretary Hagel was appointed to his position when the Obama administration wanted nothing more than to cut the Pentagon’s budget and to get out of war. At the beginning of his term, Hagel overwhelmingly agreed with the president on prudent issues and pushed his policies.

This past year, Hagel voiced some frustrations, particularly about the president’s approach to Syria and the Ukraine, drafting two private letters to the White House to express his concerns.

While there are many rumors about the circumstances of Hagel’s resignation (Did the administration push him out, or was it a mutual decision?), he is not the most effective Secretary of Defense. Hagel is described as quiet during cabinet meetings and doesn’t cooperate well with the rest of the national security team, particularly the National Security Advisor.

Along with strained relations with Susan Rice, he is “not as focused” as former secretaries Panetta and Gates.

To paraphrase Charles Krauthammer, the Obama administration can handle laziness and incompetency but not criticism, which Hagel did when expressing his opinions about the president’s foreign policy with Syria and Iraq.

Secretary Hagel promised President Obama that he would continue in his role until his replacement was approved. This promise may extend Hagel’s term far into 2015, as the president faces major difficulties in finding a new Secretary of Defense.

As Representative Howard McKeon (R) stated, “the Obama administration is now in the market for their fourth Secretary of Defense. When the president goes through three secretaries, he should ask, ‘Is it them, or is it me?’”

When appointed the new secretary would have to face looming Defense Department budget cuts while responding to the unpredictable international crises. If the next secretary leaves while Obama is in office, he will face heightened criticism for his military policy in the Middle East, seen as weak by military leaders.

Additionally, two of the front-runners for Hagel’s replacement, Michele Flournoy and Jack Reed, took themselves out of the running with questionable excuses.

The real question is, who actually wants to be the next Secretary of Defense?

The success of Gates and Panetta was in their former experience as high-profile leaders (Gates and Panetta were both the director of the CIA) and their ability to create coalitions within the administration. They took a strong stance on issues and were politically savvy.

The new secretary has to have similar strength and political presence.

During an awkward and formal ceremony on November 24th, Hagel described the Obama administration as “a team effort,” but didn’t work well with the rest of the group. The next secretary has to stake his territory on policy issues and be willing play ball with the rest of the Cabinet and the National Security Council.