Love in Saint Louis: The Unseen Side of the Ferguson Protests 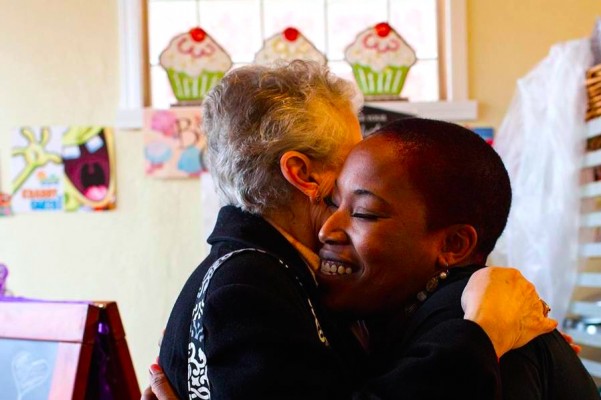 Hockey games in Saint Louis, where fans can cheer on the Saint Louis Blues, are always a popular event. They’re usually filled with vibrant fans clad in blue and gold in the streets shouting “Let’s Go Blues!” But Friday, November 28th was a different atmosphere due to the recent events in Ferguson, MO. The National Guard lined the Scottrade Center, the streets surrounding the arena were shut down, and even the slightest sound of chanting made your stomach drop. At Saint Louis Blues games, fan favorite Charles Glenn always sings the National Anthem due to his sensational voice; however, on Friday night he let the fans sing. After he started the first few phrases of “The Star-Spangled Banner” he shouted, “come on Saint Louis, we need this now more than ever!” and held up his microphone to the crowd. It did not matter if you were black or white, everyone in that arena sang in harmony to one of the most moving National Anthems I’ve ever seen.

When you’re not from Saint Louis, it is easy to only see all the negative effects of the grand jury decision regarding Police Officer Darren Wilson, whom fatally shot Michael Brown on August 9th 2014. After the grand jury decided not to indict Officer Wilson, protests began almost immediately. And while the protests were mostly peaceful, some turned violent. This included protestors burning down businesses, shooting police officers, and flipping police cars. The police responded with tear-gas and other methods to detain the protestors. Almost every media outlet has covered the protests extensively showing the city of Saint Louis during its darkest time.

But for people like me, who call Saint Louis home, there is another side that is not covered as much. It’s the side where communities come together to support one another. It’s the side that inspires hope and encourages camaraderie.

On Wednesday night, November 26th, The Fabulous Fox Theatre, a very popular theater in Saint Louis, hosted the Off-Broadway version of “Motown The Musical.” From what I could tell, the audience had as many black members as it did white. The musical began and from the start you could tell it was going to create tension within the audience. One of the first songs they sang was titled “Black Like Me” and they then went on to talk about “trigger-happy policemen” and how there are “bad cops but also good cops.” During these segments you could hear a pen drop. But that tension seemed to melt away when the woman playing Diana Ross came out and sang her song “Reach Out and Touch.” I don’t know if she does this in every city, but she told us to hold the persons hand next to us and hold it up and sing the lyrics “reach out and touch somebody’s hand, make the world a better place, if you can.” A 4,500-person audience holding hands and singing together, no matter what your race, is also a sight to see.

On the night when they announced the indictment, a local shop owner in Ferguson, Natalie DuBose, had her cake shop trashed and vandalized by protestors. She used to sell her cakes at flea markets to raise enough money to open her own store. She was seen crying on the news because, clearly, she had done nothing to deserve this. Through the crowd sourcing website, GoFundMe, she created a page which initially had a goal to raise $20,000 to replace the windows that had been broken and fix the vandalism. As of November 30, 2014, the people of Saint Louis, and I’m sure others who have heard her story, have raised $262,220 for Natalie. Local residents have gone to the store to buy cakes and more to help her business get back on its feet. The love shown in this instance from the people of Saint Louis to a local woman is what restores my faith in the city everyday.

It’s so easy to turn on the news every morning and see the, what seems to be never ending, damage that was done the night before. But what people cannot lose sight of are the acts of love that are happening behind the scenes, the acts of camaraderie that are rebuilding a city, and the faith that is ultimately going to inspire