The United States and Cuba: A “New” Relationship? 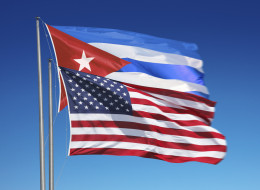 As a result of the United States’ announcement that diplomatic relations with Cuba will be restored, relations between the two countries are the strongest that they have been in decades. With the United States’ announcement comes a shift in ideological thinking on the part of American officials. No longer is Cuba seen as posing a major communist threat in the region, and in fact, the United States is recognizing that the diplomatic embargo was perhaps an antiquated policy. As a CNN article notes, “Cuba was for years the ‘Red Menace’ at the very gates of the U.S.A.” The “Red Menace” is simply no longer a menace, but a neighbor whom the United States has declared will look more like a neighbor and less like an unwelcome enemy. Nonetheless, despite the United States’ proclamation of diplomatic “friendliness,” it is doubtful that relations with Cuba will immediately prove normal nor without tension in the near future. In fact, until a generational shift in ideologies in both the United States and Cuba occurs, memories of a Cold War-era relationship will remain on the horizon. Such memories will preclude complete diplomatic normality in the coming years.

Two diplomatic encounters between American and Cuban officials in recent weeks show the improvement in relations since the United States’ announcement. However, both meetings also demonstrate the failure on the part of both countries to completely mend the broken relationship that has existed between them for well over a generation. The first meeting in Havana dealt with trade issues, though the American legislators in Cuba also met with critics of the Cuban government—considered a very unwelcome action by Cuban officials. Indeed, indicative of the pushback by the older guard, a New York Times article articulates the views of Cuban politicians who “have made clear that the improvement in relations would not end a political system that leaves little room for public opposition.” Additionally, opposition in the United States regarding the parameters of the new relationship also exists, especially in the fierce Congressional debate over the lifting of the embargo. The second meeting had the details of the re-establishment of the embassies as its focus. Both encounters display the extreme hesitance with which both sides are approaching the newly friendly relationship. Evidently, truly amicable relations between the United States and Cuba remain a distant reality as a result of Cold War memories that will only be erased with the progression of time and generations.

On both sides—American and Cuban—a “new” relationship between the two countries may not be really new at all. Indeed, without a generational shift in ideology and the disappearance of potent Cold War memories, U.S.-Cuba diplomacy will never truly “normalize.” However, as Enrique Krauze notes in a New York Times opinion piece, some progress is inevitable as a result of the United States’ announcement: “Anti-Americanism in the region will never disappear, but it is going out of fashion — and Obama’s decision will certainly further its demise.” Perhaps, as Congressman Leahy of the first diplomatic meeting in Cuba noted, it really is “a new day for Cuba and the United States.” However, the true novelty in the relationship is still years away.