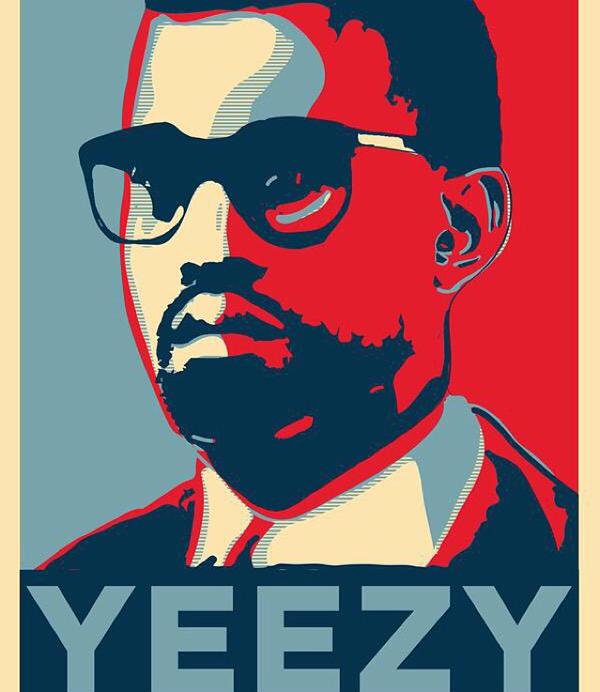 And yes, as you probably could’ve guessed by this moment, this article is about how Kanye West could become president in 2020.  For those who don’t know, Kanye, a rapper equally famous for his raps as for his public outbursts, has announced his candidacy for 2020.  Call it a publicity stunt if you want, but when a man who compares himself to Jesus and Da Vinci says he’s running, well, dammit, I believe him.  I have no doubt Mr. West thinks he has a chance of winning, but is he right?

Before we delve into this question, let’s agree on something: Kanye will run as a Democrat or at least as an independent liberal.  Here’s some evidence: he made his political debut by saying “George Bush doesn’t care about black people” on national TV (which you have to watch), appeared at an Occupy Wall Street rally, donated to Hillary Clinton’s campaign, and announced his candidacy while, admittedly, high on marijuana.  Fans of Kanye are already keenly aware of his liberalism through his lyrics:

Been a don, praying for the families lost in the storm / Bring our troops back from Iraq, keep our troops out of Iran – Power (Remix) (2010)

On the minimum wage:

And that’s not even including all the times Kanye has spoken out in favor of Black-American rights.  So, as much as some may hope otherwise, Mr. West will run as a liberal.

Yeezy does have some strengths as a candidate.  For one, he has name recognition.  You can be the smartest person in the world, but if no one knows who you are then you won’t be elected.  Fame affords additional benefits to aspiring politicians: free publicity. Because campaign ads are so expensive, candidates are constantly trying to get in the news for free.  They kiss babies in public places in hopes that their handsome faces will appear on the nightly news, free of charge.  Mr. West receives this type of attention by the bucketful, sometimes to his chagrin.  Media attention is not a positive in itself: many a candidate has been ruined by a slip of the tongue that went viral.  However, media attention, even when not deftly used, can quickly target the candidate’s potential supporters.  Candidates are selling a product, and they must advertise that product.  Mass media attention enables a candidate to cheaply advertise to all of their potential buyers, no matter how few or many they may be.  Aside from that, Mr. West also has the advantages of being wealthy and Christian, which can’t hurt. 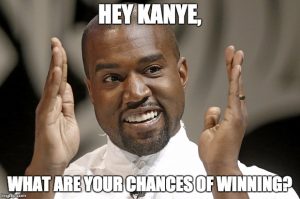 But it’s not all sunshine and rainbows for #Kanye2020. The most glaring deficit in Yeezy’s political bona fides is a lack of any political experience whatsoever.  He might believe that ideas speak for themselves, but many of us still think that our president should have at least a modicum of governing experience.  Aside from that, Kanye will have a very hard time forming a diverse enough coalition to win a general election, and if primary voters don’t think you can win the general, they won’t nominate you.  Political scientists use the Median Voter Theorem to model general elections.  This model assumes that voters are normally distributed across the ideological spectrum, shifting from most liberal to most conservative as you move from left to right on the x axis.  According to this theory, the winner of a general election between one conservative and one liberal will be the candidate who can win the vote of the median voter, aka the voter that is in the middle of the ideological spectrum.  This is why candidates fall over themselves to seem moderate after they win their party’s nomination: they’re vying for the moderate voters that decide elections.  Could Kanye West appeal to the 50% +1 voters it would take to win it all?  Probably not.  Right now, Kanye’s radical politics are most attractive to voters who hold social issues like minority rights, drug legalization, or other typically liberal causes as most pertinent.  For the average voter, however,

these aren’t the most important.  What is?  To quote Bill Clinton’s campaign, “The economy, stupid.”  The average voter cares about her bank account more than anything else.  Would voters today entrust Kanye West with their precious economy? Probably not.

But this isn’t an article about why Kanye will lose; rather, I want to talk about how he could win.

Foundations:  These are factors that West himself has little to no control over but will be critical for Ye’s chances.  First, a Republican has to win the White House in 2016.  If, for instance, Hillary Clinton wins in 2016, does not get impeached and convicted, and chooses to run for reelection (which she almost inevitably would), then she would be the Democratic nominee by default, leaving no room for another liberal candidate to have a chance.

Secondly, it would help if there were many candidates competing for the nomination with no clear frontrunner, similar to the current GOP primary.  This would give West a chance to capitalize on what I’ll call the Donald Trump Effect (DTE).  The DTE describes the way a celebrity candidate with a narrow group of hardcore supporters has an advantage in a large and highly competitive field.  This effect causes the candidate’s standing in the polls to be exaggerated early in the race.  For example: Donald Trump’s fame enabled him to get his message out to all of his potential supporters right away, which skyrocketed his poll numbers.  What Trump did was say to himself “ok, the people who will probably vote for me are xenophobic conservatives who distrust politicians.  How can I win them over right away? How about I get on the news (who were happy to have him, given his celebrity status) and call Mexicans rapists and politicians idiots.”  And it worked: not only did Trump immediately attract the support of all his potential supporters, but he also hogged enough media attention so that anyone with a similar (and therefore competing) message wouldn’t see the light of day.  The reason this is so effective is because of how large and diverse the Republican field is.  Right now, nobody has to sacrifice any of their beliefs when deciding who to support because every single type of Republican is represented.  Everyone is supporting their first choice, and, for almost 30% of GOP voters, Trump is their first choice.  The reason this wouldn’t work in a field of 2 or 3 legitimate candidates is because Trump is almost nobody’s second choice: his appeal is just too narrow.  If, for example it were a competition between only Trump and Jeb Bush, Trump would probably not even be considered a contender.  That’s because Bush’s appeal, while not as

passionate, is much broader.  Many voters, when deciding who to vote for will think, “well, I would have rather had (insert candidate) as the nominee, but since I can’t have him, I guess I’ll vote for Bush.”  In short, in a race between fewer candidates, the candidate with broader appeal has an advantage because, while he may not be many people’s first choice, he’s more people’s second choice.  If Kanye can enter a crowded race in 2016, and, like Trump, trumpet a few key issues, like minority rights, mass incarceration, and drug legalization, he could capture a passionate minority of voters and claim an early spot amongst the frontrunners.  That would solve one of Mr. West’s biggest problems: people don’t take him seriously.  If he’s mentioned amongst the frontrunners for weeks at a time, people won’t realize his numbers are inflated by the DTE, and they’ll start taking him seriously as a candidate.  If, however, Kanye is up against someone like Elizabeth Warren, all is lost, because there are very few Democrats who would put their trust in Kanye West over a name like Warren.

What Kanye can do to help his chances:

We know that he’ll need a Republican to win the next election and a bunch of no-name Democrats to run in the following, but what can Yeezy be doing in the meantime to improve his chances?

He needs to make up for the most obvious deficit in his resume: experience.  No one has ever made the jump straight from the red carpet to the White House.  The most notable celebrity president, Ronald Reagan, was governor of California before making a run at the oval office.  So, Kanye should immediately focus his energy on being more like a politician and less like an entertainer.  One fairly easy step he could take to bolster his credentials within the Democratic party is to become a fundraiser.  Hosting concerts and other fundraising events for Democrats all across the country could get West’s foot in the door while also earning him allies.
He needs to hire a GOOD team of political advisors to brief him on issues.  Jay Z and the Kardashians aren’t going to cut it this time.  From there, he needs to go on a speaking tour in which he focuses on a political message.  He could also write a book explaining his political philosophy.  The most important thing here is that he try to act presidential, shedding the public perception that he’s an egotistical ass hole.
After laying a political foundation for himself, he should run for office.  An obvious jump off point would be a Chicago area position—it’s his hometown where he’s quite popular—but any office would do.  He could run for mayor, state legislature, or even US congress.  Running for office could be beneficial even if he does not win.  Just as another Illinois son’s losing campaign launched him into the national spotlight back in 1858, so too could a hard fought campaign improve Kanye’s chances, no matter the outcome.  It would give him a chance to show off his policy chops, which he’ll hopefully have developed by then.
Ok, let’s assume everything has gone right.  He’s raised heaps of money for the Democrats, gone on an illustrious speaking and book tour, surprised the world with his policy acumen during a campaign for US Congress, and built a moderately sized group of passionate supporters going into election season.  What should he do now?  Mellow out.  Kanye needs to start moving towards the middle of the political spectrum, and he must do this without sacrificing his base support.  As other candidates drop out of the race, Kanye must broaden his appeal to absorb those up-for-grabs supporters.  This will be hard for Yeezy, as he is never one to sacrifice his beliefs.  However, if he wants to win, more than 50% of voters will have to like him more than the other guy. For a man who’s always been more adept at making enemies than friends, this is a tall task, but if we’re ever going to see Mr. West in the West Wing, he’ll have to give it a shot.

If you’re still with me, congratulations.  You’ve just read the only article to address both the Median Voter Theorem and Kanye West.