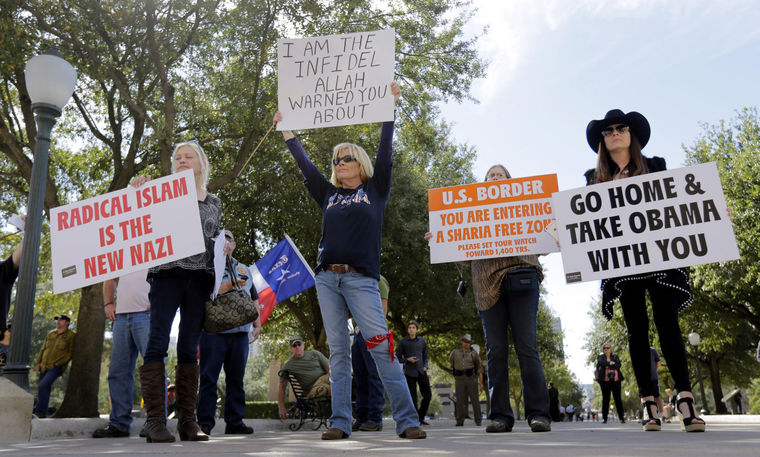 “So Muslims will go to the mosque, and they will have their day of prayer, and they come out of there like uncorked animals – throwing rocks and burning cars”

In the past 50 years, the United States witnessed the desegregation of its education system, American scientists declared the end of biological racism, and the American people elected its first African American president. Surely, we are now citizens of a nation where individuals are judged on the content of their character, not on the basis of their appearance or their creed, right? We acknowledge that our country has had a difficult past, but we finally live in a society deprived of bigotry, prejudice, and racism, right?

Ben Carson’s recent controversial statement regarding the religious qualifications of our nation’s highest office and Mike Huckabee’s previous remarks portraying Muslims as a threat to our country have critics suggesting that we still have yet to achieve the idyllic society that we all envision. Many Americans are now questioning whether Ben Carson and Mike Huckabee’s remarks indicate a greater societal problem of Islamophobia. Islamophobia is defined by Oxford Dictionary as the “dislike of or prejudice against Islam or Muslims, especially as a political force.” It certainly is alarming that two presidential candidates from the Republican Party, a party that is struggling to improve its support among minorities, are willing to make remarks that alienate a segment of the American population.

So is there truth to Carson’s claim that Muslims are somehow unfit to serve as the president of a diverse nation like ours? Carson ignores the very specific language of the Constitution: “No religious test shall ever be required as Qualification to any Office or public Trust under the United States.” The Founders were very clear in their intention that religion should never hinder a man or woman of substantial ability and character to pursue our nation’s highest office. In fact, Thomas Jefferson, one our nation’s most esteemed founders and 3rd president of the United States, rejected many conventional Christian doctrines and essentially practiced a form of deism.

Carson then attempted to defend his controversial remarks by stating that a Muslim would not be fit for the American presidency because the Islamic legal system is incompatible with the Constitution. Furthermore, Carson stated that he would distrust any Muslim presidential candidate that claimed to support the Constitution because of the Islamic concept of taqiyya, which allows its believers to “lie to achieve [their] goals.” While Carson characterizes taqiyya as a manipulative way in which Muslims can systematically lie for personal gain, Islamic scholars disagree with such interpretation. According to Omid Safi, the Director of the Duke University Islamic Studies Center, taqiyya is meant to characterize the importance of life over declaration of faith: essentially, individuals that face persecution or harm may hide their faith out of self-protection.

Huckabee’s views are even more concerning because they label nearly 7 million Americans as sources of danger to our society simply on the basis of the faith they choose to practice. The vast majority of these Americans pay taxes, have never committed a crime, and are productive citizens of our nation. According to a report provided by the US Government, Muslim Americans are essential to our nation’s economy through their heavy participation in information technology, medicine, and law. Huckabee also ignores the fact that there have been three times as many race-motivated attacks as jihadist ones. Since 9/11, America has experienced 19 attacks by white supremacists and 7 attacks by jihadists. Polling data consistently shows that the vast majority of Muslim Americans strongly disagree with the actions taken by Islamic extremists. What Huckabee fails to acknowledge is that attacks on the American people do not stem from one specific ethnic or religious background, they stem from one shared trait: hatred born from ignorance.

Both Ben Carson and Mike Huckabee are entitled to share their opinions as candidates and as American citizens. We hold freedom of speech as an important pillar of our democracy. Despite this, could their rhetoric be indicative of a greater problem in American society? As prominent leaders of public opinion, could their views shape the attitudes that Americans have toward Muslims in our country?

Polling data shows that Muslims are viewed with more negativity than members of any other faith. 55% of Americans claim to have an unfavorable or somewhat unfavorable view of Islam and nearly half of the same respondents claim to be uninterested in learning more about Islam. This Poll suggests that individuals are essentially forming negative opinions regarding a large group of people without any interest in understanding their practices. That seems problematic. Furthermore, data provided by the ACLU and the Pew Center’s Forum on Religion and Public Life suggests that efforts to prevent the construction of mosques and violent attacks on mosques have increased by 345% from 2008-2012.

So how do the supporters of Carson and Huckabee rank in this regard? Sentiments against Islam are especially strong among Republicans. A Pew survey asking individuals to rank their feelings regarding religious groups on a scale of 1-100 found that Muslims averaged a low 33 points among Republican voters. Democrats participated in the same survey assigned Muslims a neutral level of 47 points. White evangelicals, a large source of support for both Carson and Huckabee, have the most negative feelings towards Muslims out of any demographic: 30 points.

This is not just a GOP problem, it is an American problem because figures like Carson and Huckabee are prominent architects of public opinion for segments of their party.  Actions like those of Carson and Huckabee directly contribute to the negative views that Republican voters have towards fellow American citizens simply on the basis of religious identity. If candidates are willing to bash segments of our population through misinformed and offensive rhetoric, they encourage their supporters to not only adopt these negative views, but also translate those attitudes into action. Candidates in our nation must act with a degree of social responsibility. As long as opinion leaders in our country can even operate in a climate in which islamophobic remarks are potentially rewarded, then we are still far from achieving the fair society we strive for.

So does this mean that Muslim Americans are doomed to live in a close-minded society dominated by islamophobia? Not quite. A recent survey shows that 47% of Americans disagree with the statement that Islam is incompatible with an American lifestyle. Polls also show that younger Americans of all ideologies feel more warmly toward Muslims than their older counterparts. While those over the age of 65 gave Muslims an average rating of 32/100, individuals between the ages of 18-29 gave Muslims an average rating of 49/100. Recent election results also suggest that candidates with outspoken, islamophobic platforms are even receiving punishment electorally.

Do we have more work to do as a nation that advocates for the equal treatment of all Americans, regardless of creed? Of course. Are there indications that as a nation, we are making progress? Definitely. For now, it is essential that our nation’s most prominent figures begin to realign their rhetoric with the fundamental values of our nation: that all men are created equal, that they are endowed by their Creator with certain unalienable rights, that among these are life, liberty, and the pursuit of happiness. Only then, will we achieve a truly fair and tolerant America.