What Happened to Rand Paul? 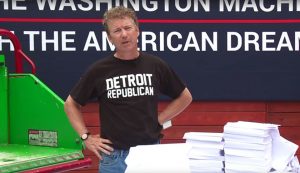 Let us rewind one year and walk in the steps of Rand Paul. Rand Paul was the Republican base’s top candidate for 2016, winning the Conservative Political Action Conference(CPAC) straw poll 3 years in a row. He was the candidate who could mold his dad’s purist, Libertarian views into something palpable for the rest of the country. Rand was the candidate who was calling for “Economic Freedom Zones” in Detroit and saying that he would get at least a third of the Black vote in 2016. At the same time, he was meeting with Rupert Murdoch, the billionaire head of News Corp and 21st Century Fox, convincing Murdoch that the crack-cocaine disparity was wrong and unfairly targets Black Americans. Rand Paul was supposed to be a candidate who could reach out to all facets of society. He was supposed to have the support of his dad’s passionate Libertarian base, while also being moderate enough for the average Conservative. He was supposed to reach out to marginalized minorities the GOP hadn’t seen much success with in the recent past; And also have a foreign policy that could reach out to more dovish Americans who believe in a non-interventionist foreign policy.

Paul was declared “The Most Interesting Man in Politics” and ranked as one of Time’s 100 Most Influential Americans last year. In his biography for Time, written by Republican Senate Majority leader, Mitch McConnell, McConnell wrote,”no one in either party today brings the level of missionary zeal to the task that Rand Paul does. From Berkeley, Calif., to Detroit, my Kentucky colleague has been cheerfully clearing a path for Republican ideals in the unlikeliest precincts.” Rand Paul was to be the revolutionary that his dad was, with a touch of pragmatism. But looking at today’s polls, Rand Paul has 2% of the vote, placing 10th among GOP nominees. So the question now comes: What happened to Rand Paul?

Rand Paul’s biggest problem is that he strayed too far away from his dad’s Libertarian base. His father, Ron Paul, had an extremely zealous following, but Ron could never break from that mold, into the mainstream Republican Party. Rand Paul attempted to tread a path that maintained the support of the base while also having appeal that could transfer over to mainstream Republicans who he needs to win the nomination. One of the most consequential decisions of Paul’s career was signing a letter to the Iranian government, written by hawkish Senator Tom Cotton, stating that Iranian leaders “do not fully understand our Constitutional system” and that any future President could “revoke the agreement with a stroke of a pen.” Such an action was a big change from Rand Paul’s previous positions on negotiations with Iran and really far from his dad who declared sanctions to be an “Act of War.” In 2012, he had blocked a bill placing new sanctions on Iran. Senator Paul also called Senator Marco Rubio “an isolationist,” over his support for Cuban sanctions, which was ironic as this is a term critics usually associate with Paul’s foreign policy. Paul’s opposition to the Iran deal really incited former avid Paul supporter and editorial director of AntiWar.com, Justin Raimondo, who said,“This is more than a flip-flop. This is a backflip…This was the last straw. I’ve put up with a lot from that guy! I’ve had to defend him like a Jesuit. I’m done. Let somebody else do it.” Whitney Davis, a member of Young Americans for Liberty, a group founded during Ron Paul’s presidential campaign, took part in burning Rand Paul campaign memorabilia saying,“From what I understand, it’s a good deal…Iranians were celebrating in the streets over the lifting of sanctions…I feel like that’s what we want as libertarians.”

As a result of Rand straying from his Libertarian principles, PurplePAC, one of the three PACS supporting Paul stopped raising money for Paul. Ed Crane, the head of PurplePAC, stated,“I have stopped raising money for him until I see the campaign correct its problems…I wasn’t going to raise money to spend on a futile crusade.” Though Libertarians see him as too hawkish, other Republican donors do not see him as hawkish enough. Phil Rosen, a top donor for Mitt Romney said on Senator Paul, “I do not know of a single person in Mitt Romney’s donor network who will be with Rand Paul.” Rosen also stated he met with Paul and said he would not be supporting him “because of his isolationist and libertarian policies.”

And from that comes the problem of the Rand Paul presidential campaign. He has made himself irrelevant by being too moderate for the Tea Party and too Tea Party for the the moderates. Ultimately, Rand Paul has struggled to tread a path where he can please enough to be elected as the Detroit Republican who redefines the Republican Party.