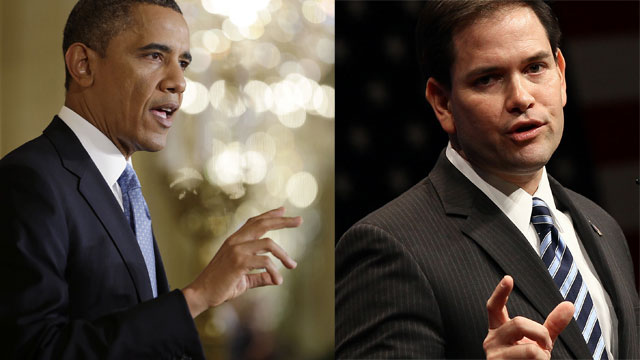 At the publishing of this article, we stand 341 days away from Election Day 2016. The most recent Real Clear Politics polling average has Donald Trump as the GOP leader with 28 percent of the field, and Ben Carson coming in second with almost 19%. Hillary Clinton still sits atop the Democratic field with 59 percent, and Bernie Sanders is currently polling in with 30%.

However, with increased rhetoric about how this election is bigger than one party and more about the future, it is GOP Senator Marco has drawn comparisons to President Obama and his 2008 election bid. “Marco is a GOP Obama” says a leaked Jeb Bush campaign strategy guide. 2008 Obama and present day Marco Rubio have many similarities in their social and political experience. Both came from tough childhood backgrounds, both taught law at the university level, both were first term senators when they ran, and both attempted to appeal to a young voter base with a social media prominence and youthful spirit.

Furthermore, Rubio’s Presidential campaign announcement speech in Miami echoed then-Senator Obama’s speech. On a chilly morning in February of 2007, Obama told a crowd of citizens in Springfield, Illinois, “You came here because you believe in what this country can be…Each and every time, a new generation has risen up and done what’s needed to be done. Today we are called once more — and it is time for our generation to answer that call.”  Also, looking towards the future and calling upon his contemporaries, Rubio similarly said in his announcement, “Now the time has come for our generation to lead the way towards a new American century…But this election is not just about what kind of laws we will pass; this election is a generational choice about what kind of country we will be.”

As previously stated, Jeb Bush’s campaign “accidentally” leaked a campaign slide show presented to Bush donors claiming that Marco is a GOP Obama.  While Rubio has claimed to not take too kindly to such comparisons, he may begin to draw similar contrasts to Hillary Clinton as Obama did in the Democratic primary eight years ago. Younger Democrats are beginning to see Hillary as less favorable than Democrats as a whole suggesting a voting group where a youthful and energetic Marco Rubio could potentially snag some valuable votes Democrats could traditionally rely on.

While Rubio’s engaging speaking manner and inspiring vision could be draws for many GOP voters, the fact remains that he sits solidly in third or fourth place as we enter the holiday season. With only one more GOP debate before the end of 2015, it will be tough for Marco to gain traction before the Iowa and New Hampshire primaries. However, at this point of the 2008 election cycle, President Obama sat twenty percentage points behind Hilary and went on to suffer a defeat in New Hampshire. Yet, the question remains as to whether or not Mr. Rubio will be able to separate himself in such a diverse and, let’s say, unique Republican field. In September, former Obama aid Dan Pfeiffer said that Rubio “by far” is the opponent the Democrats most fear. “I think the best arguments Republicans will have against Hillary Clinton, the most likely nominee, is a future versus past. And he embodies the future.”