How to Disagree Without Being Disagreeable: John Boehner Speaks at Vanderbilt University 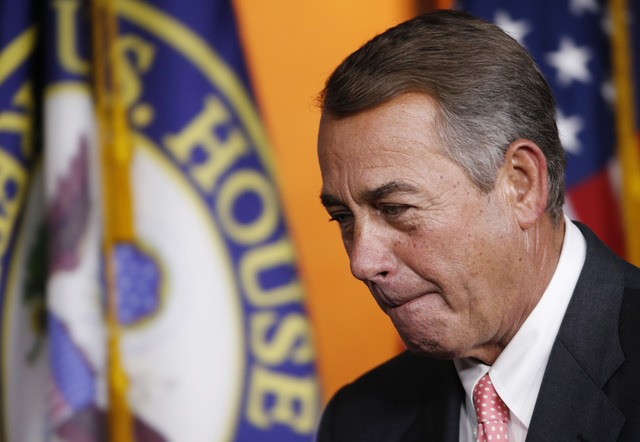 House Speaker John Boehner of Ohio leaves a news conference on Capitol Hill in Washington, Friday, Sept. 25, 2015. In a stunning move, Boehner informed fellow Republicans on Friday that he would resign from Congress at the end of October, stepping aside in the face of hardline conservative opposition that threatened an institutional crisis. (AP Photo/Steve Helber)

By Abigail Fournier and Charlotte Mellgard

On Wednesday, March 23rd, John Boehner, former Speaker of the US House of Representatives, spoke at Vanderbilt University in Langford Auditorium. Boehner spoke as part of the 2016 Impact Symposium, focused around the question: “The Struggle for Success: Is America Dreaming?”, organized by the Vanderbilt Speaking Committee. A diverse and excited group of students and faculty gathered to hear the former Speaker discuss current hot topics, including the future of the Republican party, the 2016 presidential election, the accessibility of the American dream, and more.

Boehner’s talk began with him sharing his own personal story, starting with his childhood, which was unique considering he was one of 12 children. Boehner argued that he is an embodiment of the American dream, as he was self-made and was able to work hard to achieve and move up in society. Boehner argued that a critical part of keeping this American dream alive is improving the education system in our country, later stating that we only educate about half of our children. He argued that although this dream is still accessible, the huge debt we have accumulated through entitlement programs stands as a barrier to achieving this dream for younger generations. Boehner spoke about his personal political desires, advocating for traditional conservatives values including a smaller, less costly, and more accountable government. After this brief speech, Boehner was interviewed by David Lewis, the chair of the Political Science Department at Vanderbilt.

Professor Lewis asked Boehner about several current topics in American politics, addressing the many uncertainties that seem to characterize the political world today. Boehner spoke about the future of the Republican Party and seems to be as unsure as many Americans. Boehner said that the differences that used to divide Republicans in the House of Representatives were not about “the big picture”, whereas today, he sees Republicans disagreeing over more fundamental values. Boehner remains confident that the Senate and House are still electing good representatives; however, he characterized the 2016 presidential election as, “Another story”. Boehner spoke about the rhetoric observed between candidates today being out of control and argued that it has harmful effects on the institution of the presidency. Boehner joked that he is thankful he left government when he did. Later during the talk, a student asked Boehner, “Trump or Clinton?”, and he successfully evaded the question, but did add a sarcastic, “Good luck”.

Students asked the former Speaker about other hot topics in politics, like the prevalence of institutionalized racism, police brutality, and the Black Lives Matter movement. Boehner said that whether police brutality today is more prevalent today than it has been, or if it is just being covered by the media more, he is glad that these issues are receiving attention. Boehner advocated for change in police tactics and argued in favor of sentence reform. Boehner said that our current system is too harsh on nonviolent criminals and it actually breeds lifelong offenders; Boehner said that we must get these nonviolent criminals out of the justice system.

A central theme to Boehner’s talk was the importance of working across the aisle. Boehner cited the ability to collaborate with others as one of the two habits conducive to productive legislators, along with knowing the material pertaining to essential issues. However,  when questioned about the polarization which many believe plagues Congress today, Boehner believed that such divisiveness is not prevalent. In fact, Boehner stated that Republicans and Democrats are quite friendly with one another, citing his work with former democratic Senator Ted Kennedy as an example of this. In response to Boehner’s rejection of the idea that Congress is polarized a student questioned why, then, is there evidence that Congress has decreased significantly in productivity, particularly in its ability to pass legislation? Boehner simply stated that the amount of legislation passed does not measure the productivity of Congress. Instead he adhered to the idea that, as a Republican, he sees the passing of less legislation as a success as he advocates for less government control. He clearly held that the polarization lay within the electorate and not within congress itself.

Boehner continued by placing the blame of increased polarization on the media’s ability to divide the electorate. The former Speaker of the House implied that the media, through focusing on more divisive, entertaining issues, pushes people away from moderate modes of thought. As networks focus on achieving good ratings they are more likely to cover solely entertaining and or extreme issues. As Boehner pointed out, thirty or forty years ago there were only a few news channels which focused on less divisive issues. This resulted in a less polarized electorate.

While the electorate is increasingly more divided, the blame of such polarization cannot be fully placed upon the media. The media, in many respects, increases the preexisting divisiveness and stagnation that characterizes our government. Though Boehner believes that a decrease in the passing of legislation is not an accurate measure of polarization this fact must certainly be taken into consideration. The 112th congress passed a mere 561 bills. Starting at the 80th Congress until the 112th Congress, the average number of bills passed hovered around 1,224. It cannot be denied that the factionalism that has characterized the most recent sessions of Congress and the lack of legislation passed is a result of this lack of compromise. Though the passing of legislation is not, by any means, the only or best way to measure productivity in Congress, it certainly is an indicator and result of the political stagnation and hostility between the Democratic and Republican parties. Ultimately, it is potentially dangerous to ignore this truth. Though ignorance may be bliss, it can also perpetuate the endless cycle of stagnation and polarization that currently haunts our government.

Boehner said that the most important thing he learned in government was how to disagree without being disagreeable. Moving forward in an increasingly polarized Congress, this would be an effective strategy for legislators to practice to induce collaboration and productivity.