The election may be heating up, but Winter is Coming. 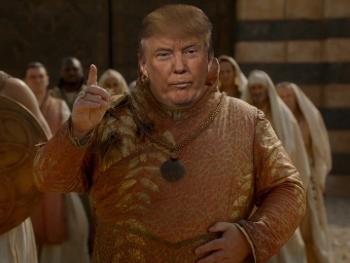 Betting markets are in favor of the GOP having a brokered convention. People who are mad about college students whining over words are also whining… over words. Young people do not like Hillary. The Republican establishment does not know how to deal with Trump.  And the general vibe is that Americans are feeling fed up with politics. But you already knew that.

Most people mark New Years on January 1st, but I tend to do so when a new season/book of Game of Thrones, or its series name, A Song of Ice and Fire, releases. Since season 6 of Game of Thrones will begin on HBO this Sunday, April 24th, let’s escape from our world of angst, braggarts, and finals and jump into Planetos, a world of dueling political families, a country suspicious of those on the other side of a wall, and fear of what comes with a changing climate. A completely foreign place indeed. Elements of magic abound in George RR Martin’s creation, but with Kobe scoring 60, Ted Cruz becoming palatable for a major political party, and Leo winning an Oscar, who knows what magic will next happen in our universe.

After the 2012 elections, GOP leaders determined that in order to remain competitive in national elections it had to “stop being the party of stupid.”  On that regard, the following four years have been iffy at best. At one point the party’s debates for the most powerful position in the world boiled down to a contest over body parts. And by early March 2016, only one half of Republicans would be satisfied if the current delegate leader of their party, Donald Trump, were to be the nominee. A group of people becoming severely dissatisfied after a broken promise parallels nicely to the Game of Throne’s Red Wedding. In the end it appears as if the crazy old men who will say anything to anyone to become more popular, Walder Frey and Donald Trump, stand to benefit greatly, along with the conniving pragmatists of Tywin Lannister and Ted Cruz. And with every Red Wedding, there are the unfortunate souls whose presence is never felt again. While we screamed our lungs out  as our favorite Starks perished, the look on Robb Stark’s face after the Lannisters sent their regards was all to familiar for the savvy 2016 election viewer. Robb was the chosen one destined to bring together all factions of Westeros against the atrocities of King’s Landing. He was young, slightly inexperienced but capable, and willing to work across partisan lines. He won many early battles, but ended up dead at his own celebration. Poor Robb. Poor Rubio. Whether it is comparing Rubio’s “victory” speech after the Iowa Caucus to Robb’s espousal of the rights of the King of the North, the parallels between the Young Wolf and little Marco are thorough.

In one of the season 6 trailers, the High Sparrow, with an intense musical score in the background, claims “every one of us is poor and powerful, yet we can overthrow an empire.” Tell me the High Sparrow is not feeling the Bern. A purist old man with wispy white hair leading a charge of young ideologues  intent on ridding the capital city of corruption. Depending on your political leanings you can put Hillary as Queen Cersei Lannister or Daenerys Targaryen. The former being a ruthless pragmatist with a politically motivated marriage intent on maintaining power as long as possible. Liberals may be more inclined to see Hil as their Khaleesi: purest of all the contestants in the race, willing to make difficult decisions, and ready for a job that is justly hers.

Outside of the 2016 campaign more parallels can be drawn. After Robert Baratheon’s spending sprees on wine, ale and more wine, Westeros was left severely in debt to the Iron Bank of Braavos. Despite Littlefinger, the master of coin of Westeros, beseeching Queen Cersei for less spending, Westeros keeps borrowing more and more, leaving its children with a tremendous burden. George RR Martin also masterfully depicts foreign colleagues who, depending on the time of day, can be the best of friends or worst of foes. From Walder Frey to Lord Craster, in the later seasons, foreign alliances that are mutually beneficial are a struggle to come by for Westerosi leaders. And with America consistently on shaky ground with many Middle Eastern nations, struggling to bridge the gap of natural resource interest and political gains, similarities are seen.

Lastly, one of the more talked about real world connections of Game of Thrones is comparing the threat of white walkers to the threat of climate change.  Both are threats non-tangible for the vast majority of people in the world including and especially political leaders of the age. These leaders are caught up in their own immediate problems, and as a viewer of the show, as a Vox video points out, you are angry at leaders of Westeros for not realizing the massive problem White Walkers bring. The lack of immediacy and overtness of the threat of climate change is something that many climate activists try to deal with on a regular basis in the real world.

All in all, as with the 2016 elections and real world politics we must wait and see what the next chapters reveal. Despite the failings of our beloved heroes, be them Robb Stark, Barack Obama, Tyrion Lannister, or Marco Rubio, we still have hope. Hope that WHEN, not if, WHEN Jon Snow comes back from the dead (or wherever the hell he goes to) he will be the one to bind up the nation’s wounds and lead the charge in the interest of the common good. Hope that our present real-world state of divisive politics will end. Whether bringing together ice and fire or liberal and conservative, progress can be made through hard work and sacrifice: for this we know, and for this, the North remembers.