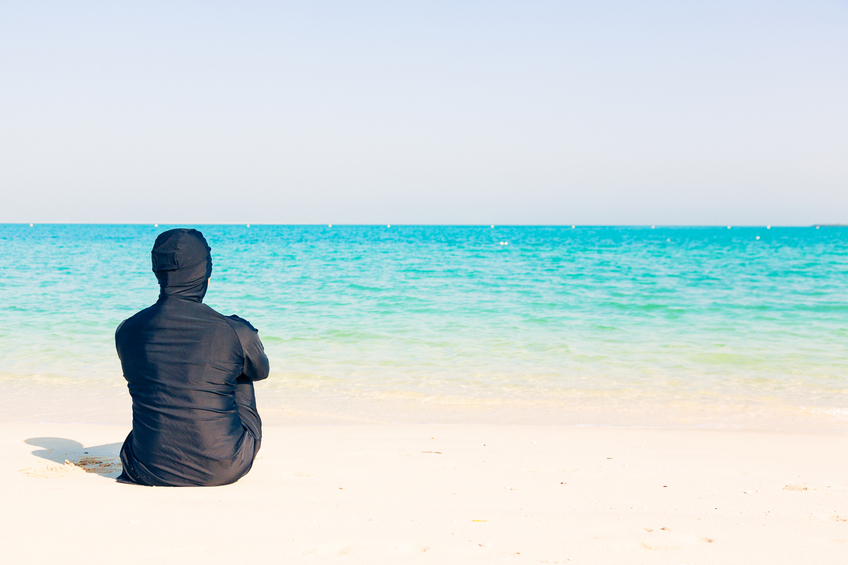 young woman wearing burkini sitting by the beach in dubai

With the Syrian refugee crisis rocking Europe, many countries are questioning their identities and what their citizenry should look like. France, with a Muslim population of 5-10 percent, is struggling to maintain their culture of secularity. Despite having the largest Muslim population in Europe, France is lashing out against visible displays of Islam. This summer was marred by bans on the “burkini,” even though such laws have been declared illegal by French courts.

A “burkini” is a bathing suit invented by Australian Aheda Zanetti. It  covers a woman’s whole body with the exception of her face, hands, and feet, but is still light enough to wear to the beach. Given that many Muslim women cover themselves as a religious practice, this invention is extremely useful.

France has a long history of secularism in public spaces, and the hijab, along with crosses, habits, and other open displays of religion, is banned in schools and public places. Thus, wearing a burkini to the beach seems to some like an anti-French statement on the part of the Muslims. In fact, the burkini can be used for inclusivity, not division.

“If we’re thinking through the privilege that the French community places on secularism, you can imagine the motivation for this,” Vanderbilt Women and Gender Studies lecturer Jamie Shenton said. “In this view, the ‘burkini’ makes people ‘different’ from other people, therefore it’s not acceptable, because the French are going for this radical egalitarianism. But to read a symbolic and literal partition from French society in the ‘burkini’ is not necessarily a natural assumption. In fact, it may be a way for French Muslim women to express solidarity with the rest of the citizenry. They want to be on the beach with their families, they want to be able to enjoy this public space with everybody, and they can do so by putting on this ‘burkini.’”

The argument that covering up is anti-French because it is a display of religion is difficult to justify given France’s colonial past, especially the colonization of northern Africa.

“There is a historical context of colonized peoples in France, and many of these communities still struggle with low socioeconomic status and less education,” said Peabody graduate student Hasina Mohyuddin, whose thesis focuses on the intersection of religious and sexual identity in Muslim American youth. “People are still working in low paying jobs, which France actually needs them to be doing, but at the same time they’re being vilified. Rather than making the North African experience part of the French experience they’ve separated it out and ‘othered’ it.”

While the “burkini” ban has sparked international outrage, controversies over female dress are not unique to France. Dress codes in American high schools, for example, show the opposite end of the spectrum, where women are criticized and reprimanded for wearing too little clothing instead of too much.

And indeed, when former prime minister Nicolas Sarkozy labels the “burkini” a provocation supporting radical Islam, blame seems to be the primary issue. As world famous author of the Harry Potter series Joanne Rowling put it on Twitter on August 25th, “So Sarkozy calls the burkini a ‘provocation.’ Whether women cover or uncover their bodies, seems we’re always, always asking for it.”

The experience of Muslim women in France is a very different one from American high school students battling the dress code, or transgender women deciding which bathroom to use, or rape victims being asked what they’re wearing. But while this controversy is specifically about  Muslim women, dress is used to police ideas and expression every day in other ways. It is vital that Western societies, in their desire to “protect” and “save” women, are not complicit in their oppression.