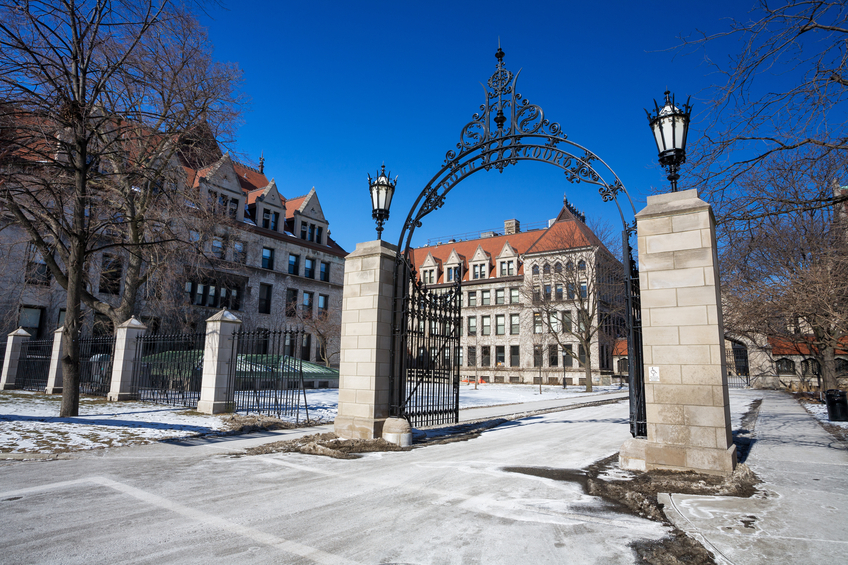 Chicago, USA - February 10, 2007: Entrance to the University of Chicago quadrangle, viewed from the street in Hyde Park, a community of Chicago on the South Side. Ornate gate and buildings in winter. No people.

In late August, University of Chicago Dean of Students John Ellison sent a letter to the incoming class of 2020 making clear that the university does agree with recent trends in academia. The letter reads,“Our commitment to academic freedom means that we do not support so-called ‘trigger warnings,’ we do not cancel invited speakers because their topics might prove controversial, and we do not condone the creation of intellectual ‘safe spaces’ where individuals can retreat from ideas and perspectives at odds with their own.”

Speech on college campus has become a point of debate in recent years. Many protests have broken out due to the opinions of guest speakers. In late 2015, a Yale University faculty member defended free speech, arguing that the administration ought not tell students how to dress on Halloween. Student backlash eventually led to the professors in question stepping down. At the University of Missouri, President Tim Wolfe was forced to step down after protests by students and the school’s football team. This issue will once again take center stage at Vanderbilt on October 11th when conservative activist and Breitbart editor Milo Yiannopoulos comes campus .

The University of Chicago letter has garnered a predictably mixed response from academic leaders across the country, and at Vanderbilt we see a similar trend. In our interview, political science and law professor Carol Swain expressed support for the letter and hoped that more universities will choose to follow the University of Chicago’s example. She believes that safe spaces are “unnecessary and send the wrong message to students” and that “students should be mature enough to engage in conversations on issues and ideas that may be foreign to them without taking offense.” Over email correspondence, Richard Pitt, a professor of sociology at Vanderbilt, mostly agreed with the Chicago letter and is glad that the institution “isn’t buckling to what sometimes feels like a left-leaning corollary to the censorship and intellectual witch-hunts I’ve felt from cultural/ political forces on the right.” On the issue of safe spaces, Pitt expresses a nuanced point of view, writing, “I want my classes to be spaces that are safe FOR important (and sometimes uncomfortable) conversations, not spaces that are safe FROM them.” [Emphasis his.]

Professor Pitt’s comments get to the heart of some of the disagreement concerning the University of Chicago letter. Slate’s LV Anderson writes that Dean Ellison completely mischaracterizes the point of safe spaces, arguing that they exist primarily to help accomplish Ellison’s goal of “building a campus that welcomes people of all backgrounds.” One layer of agreement found in all analyses is that debates with people of differing viewpoints often enrich student experiences. Vanderbilt first-year Dylan Reilly commented, “[One] issue is that people think opinions should be treated as facts, and I think safe spaces and trigger warnings are important because that’s not how opinions should work.” Furthermore, Professor Swain recognized the importance in learning how to get along with those who may have different opinions and personal backgrounds, arguing, “The whole purpose of affirmative action is for us to learn from one another.” Professor Pitt argues further that “too often once [students] get to campus, they only value the diversity as long as it doesn’t make them uncomfortable by being ‘too different.’ Give me a Black roommate, but none of the ‘Black Lives Matter’ activism. Give me a roommate from Alabama, but she better embrace my being a lesbian on day one.”

Another notable nuance in this issue is the idea of one instructor’s bias affecting the type of “trigger-warning” given in the classroom. As The Atlantic’s Conor Friedersdorf writes, “The myth of the value-neutral trigger warning is most easily punctured by imagining how a typical college professor would react to a request from an evangelical conservative student that The Vagina Monologues carry a trigger warning for ‘discussion of female genitalia.’” The regulation of one’s own biases is much more of an art than a science and is a practice that must continually require introspection. Professor Pitt acknowledges, “I’ve been accused of being against Christianity and too-pro-religious, racist against White students and ‘not-woke’ by Black students…in the same semester, in the same course.” What makes college campuses so unique is that they allow students to discuss each other’s biases immediately in a classroom setting, a far cry from reading an online article or watching a newscast where the viewer has no effective way to retort. Therefore, it is essential that such discussion continue, a goal that all sides of the safe-space and trigger warning debate hold.

Ellison’s letter says that one of the University of Chicago’s defining characteristics is “commitment to freedom of inquiry and expression.” As a leading national institution, the University of Chicago has prepared students to excel in life after college for more than one hundred years. Thus, the administration framed the letter in a manner that leads the reader to assume safe-spaces and trigger-warnings inhibit the achievement of such excellence. As Professor Swain states, “If you have a student and all they know is safe-spaces, microaggressions, and the search for trigger warnings, when they go out into the real world, be it a job or in the military, the world doesn’t operate that way.” However, a different interpretation of these ideas could lead to the conclusion that only in “safe spaces” are people of all backgrounds comfortable to engage in critical dialogue. A supporter of safe-spaces, Reilly stated, “If your opinion is right and just, you should be able to have it challenged and you can defend it.”

What I have gleaned from these interviews is the fact that whether or not one is pro-safe space or pro-trigger warning, cultivating a campus where many opinions are tolerated is the ideal. One should not respond to a sincere opinion with hostility but rather with measured disagreement. Anytime someone feels marginalized or not respected due to an ideology or personal history, the system is not working. Going forward, campuses must identify the right mixture of respecting divergent opinions and supporting those individuals and groups who feel overlooked. To conclude in the words of Professor Pitt, “Hopefully, the tolerance and openness-to-change that characterizes this current generation of college students (according to practically every survey of you folks) can lead to more open-and-honest conversations.”