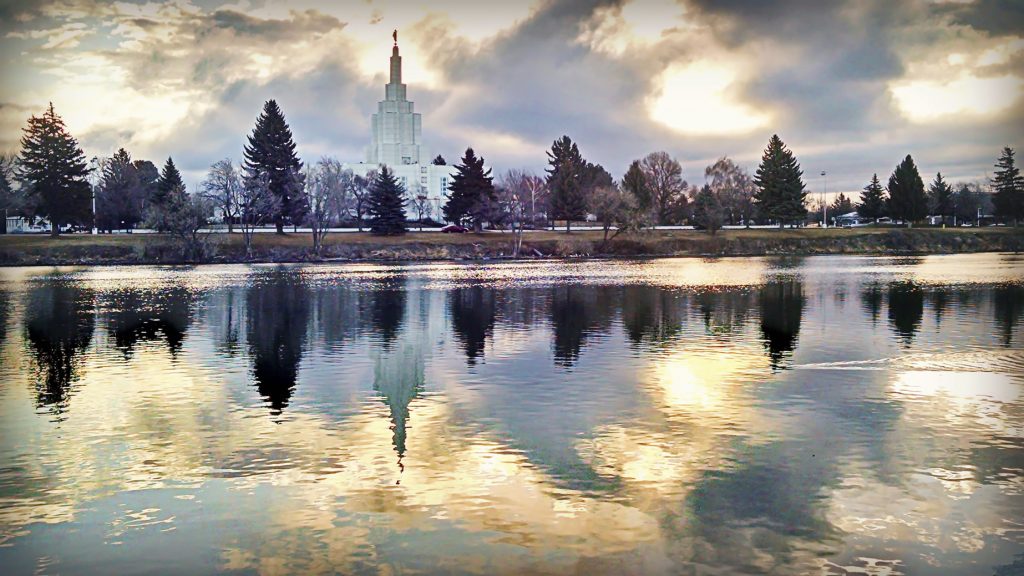 Storm moving through left this beautiful reflection of the sunrise on the Snake River of the Idaho Falls Temple.

In Part 1 of this article, I explored the nuances to the Jewish vote and the various pressures that are impacting the American Jewish community in this election cycle. That article mentioned Bill Kristol, one of the main figureheads of the Never Trump movement, and his attempts to find a suitable third party member to run. He settled upon Evan McMullin, a Mormon, former congressional staffer, and a longtime CIA operative. Even before McMullin entered the race as an Independent, the Mormon voter base did not support Trump nearly as much as they did past GOP candidates.

In 2012, 78% of the Mormon population supported Mitt Romney, similar to the roughly 80% of Mormons who supported George Bush in 2004. However, this election is different. Mormons, unlike virtually all races, ethnicities, or other religions, are showing drastically different voter preferences in this election. In 2012, Romney won the state of Utah, which has over a 60% Mormon population, 73% to Obama’s 25%. The current 538 elections projection has Trump in the lead with 38% against Clinton’s 28% and McMullin’s 27%. The Deseret News, a paper owned by the Church of Latter Day Saints, has called for Trump to drop out of the race. Mitt Romney and Utah Senator Mike Lee, both Mormons, have urged Trump to quit.

Utah State officials weighed in, over email, as to whether or not Trump’s rhetoric or policies were more off-putting to the Mormon community. State Senator Todd Weiler wrote, “It is not his policies.  It is more his lifestyle and morals…He has cheated on his wives.  He shows little or no remorse.  He has little or no religion.  He is selfish and narcissistic.” However, Mormonism is, by no means, the only religion that teaches its followers a different moral code than the one Trump follows, or at least, appears to follow. That is, while many white, evangelical Protestants, Baptists, or Methodists may disagree with Trump’s morals, they will overwhelmingly vote for him due to preference for his policy views. However, as Brent Platt, the Director of Utah’s child welfare agency noted, many of Trump’s policies relating to religious groups could be a turnoff for many Mormon voters. “His attacks on Muslims might remind Mormons of their own history of being persecuted, singled out, forced to leave their homes and communities, even the extermination order signed by a governor in the 1800’s.”

Yet this does not mean that the entire Mormon community is in all out revolt against Mr. Trump. Polling in mid-October, after McMullin entered the race, found that Trump was still attracting 38% of the Mormon vote. Dallas Earnshaw, the superintendent of the Utah State Hospital noted, “I have spoken to a few members of our church who are very familiar with his policies and plan to vote for Trump. They have stated to me that they feel it is more important we have a President with good policies and they tend to ignore the rhetoric.”

In 2012, many pundits debated whether or not Mitt Romney being a Mormon would lead to distrust from other evangelical voters. It appears as if this treatment of Romney looms in the minds of many Mormons. In the words of Mr. Earnshaw, “We also are stereotyped and have been given labels over time as a ‘cult’ or strange group of people.  We are not seen as Christians by many and it feels like people are guarded and cautious when dealing with ‘Mormons’.” As Mr. Platt noted, a candidate believing that there are some right religions and some wrong religions has long been something Mormons feared, since throughout history Mormons rarely fell in the “right religion” group. For some Mormons, the willingness of many other evangelical voters to warmly embrace Donald Trump is evidence of, at the very least, inconsistent logic. “It is remarkable to me that so many evangelists have embraced Trump with all of his faults, but struggled with a good family man like Mitt Romney because he was a Mormon,” wrote State Senator Weiler. Political scientists have noted that much of Donald Trump’s rhetoric has been focused on in-group, out-group rhetoric, exemplified when he referred to Obama as “your President” while addressing Secretary Clinton during the first debate. Non-Mormon evangelical voters have long been well-represented at the local, state, and federal levels of government. Trump’s willingness to degrade minority groups in the country, be they immigrants, Muslims, or those with disabilities, does not affect them in the way it impacts others in the country.

Although Donald Trump does not align with many Mormon voters’ moral preferences, Hillary Clinton’s more liberal policies certainly do not see much support either. This combination of discontent led to many Utah voters willing to embrace Evan McMullin. “McMullin, regardless of religion, seems firm but polite, principled, and moral, and I think that is driving a lot of people to him,” wrote Evan Holmgren, current LDS bishop and Director of Utah’s Aging and Adult Services. All four of the Utah state officials who are mentioned in this article believe that many Mormons see McMullin as the combination of conservative policies and upstanding morals that the community desires. Although McMullin may seem like the catalyst that re-engages many disenchanted Utah voters, third parties tend fade out as Election Day draws near (see Johnson, Gary). However, participation in elections and casting an informed vote is strongly encouraged in the Mormon faith. “It should also be stated that the LDS Church leaders encourage us to participate in the elections and to study the issues and vote for candidates who support our values,” says Earnshaw. Holmgren also wrote that Mormons inherently feel a strong urge to participate in elections, though the nature of 2016 makes one question high levels of voter participation.

The uncertainty regarding Mormon-voter turnout levels mirrors the uncertainty regarding the turnout for all Americans: dissatisfaction with both major party candidates, yet the belief that one option on the ballot is better than the rest. Soon Americans will have their voice heard. To close with the words Mr. Holmgren, “This is not the last election I will vote in – if I don’t stand on principle here, how can I apply my principles to future elections?”