US Elections: the Political Science Department’s Most Popular Class 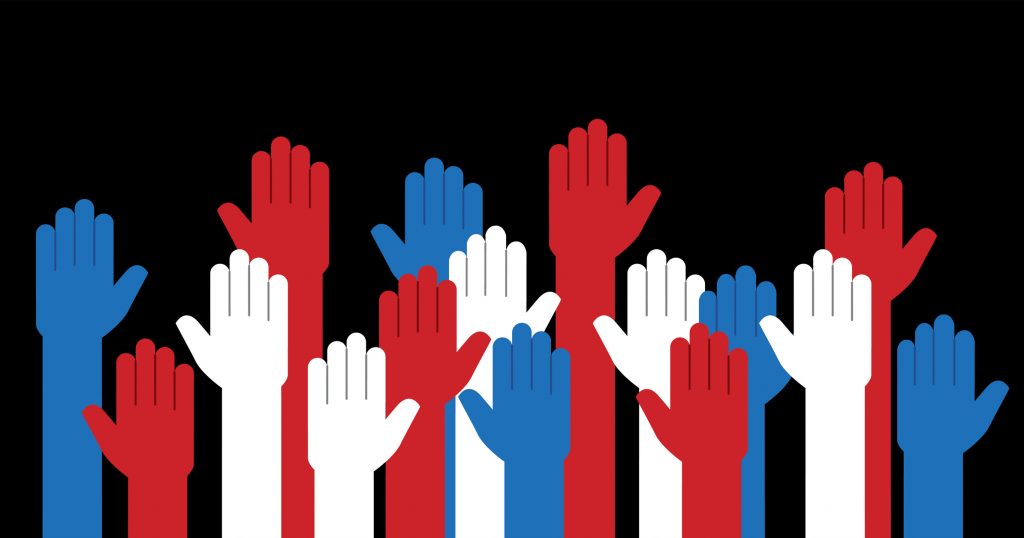 Vector illustration of raised up hands in red white and blue.

This fall, Vanderbilt’s Political Science Department once again offered its U.S. Elections class, taught by Professors John Geer, Bruce Oppenheimer, Josh Clinton, and Jon Meacham.  Offered only during the fall of a presidential election year, it is the department’s largest and most popular class, with a capacity of 300 students. The class is unique in many ways, one of which is that students have only one shot to take it during their four years at Vanderbilt.

“It has an unknown reputation, so nobody is here to tell the next students that the class really isn’t that good or worth taking,” joked Professor Oppenheimer, the co-founder of the class.  He and “co-conspirator” Professor John Geer set up the class in 1996 soon after Geer joined the Political Science Department. Having observed the great political interest leading up to the election that year, Oppenheimer approached Geer with his idea.

“I approached him and asked, ‘Why don’t we teach a big course about the election?’  He would cover the presidential side, and I would cover the congressional side, and obviously we overlap a little as well,” said Oppenheimer.  Geer, being a specialist in public opinion, campaigns, and mass media, was thrilled.  Two decades later, the two still teach the class every four years.  In addition, NBC Senior Election Analyst Joshua Clinton joined the team in 2012, as did Pulitzer Prize-winning historian Jon Meacham in 2016.

The content of the course focuses on both congressional and presidential elections in the United States.  Lectures have covered primaries, incumbency, debates, advertising, polling, and the impact of political parties. The assigned reading comprises of The Politics of Congressional Elections, one of the most highly regarded texts on the subject matter, and The Gamble, a groundbreaking melding of social science and journalism about the choices made throughout the 2012 election.  Many guest lecturers have also spoken to the class, from former Jeb Bush campaign manager, Sally Bradshaw, to Tennessee Senator Bob Corker.

Students in the class are encouraged to follow the election, and the professors  incorporate developments in the campaign as they see fit.  For example, in October when Donald Trump threatened to challenge the legitimacy of the election results, a lecture was added discussing the history and perception of legitimate elections in the United States.

Responsive as they may be to the developments of the 2016 campaign, the professors try to move their students past the day-to-day political speculation.  One of the primary lessons of the class is that U.S. elections are largely driven by structural factors, such as the the economy and the amount of time the incumbent party has held power.  As Professor Clinton remarked, “Hopefully we can shine a spotlight on how, yeah, there’s all this stuff that seems crazy, but at the end of the day you can see some real strong systematic features that make it not dissimilar from what we’ve seen from past elections.”

As previously mentioned, the class is one of the largest offered at Vanderbilt (300 students) and definitely the largest held by the Political Science Department.  Yet this does not faze the professors.  “It is always fun to teach a really large class once in awhile,” Oppenheimer said.  “It’s a different style of teaching. You have to be a little more theatrical. It’s like the difference of being at a rally or being on television. Your gestures, the way you speak have to be more moderated on TV.  But in a big class you have to do a little more performing, so that’s fun.”  The size of the class is also a product of necessity.  As Professor Geer noted, “The alternative would just cut down the number of people doing this.”

The election may be over, but the class isn’t.  The curriculum has moved to cover transitions of presidential power as well as what the election results mean going forward.  There is certainly much to evaluate. To many, the results of this election were unexpected or even alarming.  Professor Oppenheimer concedes that there were certainly unusual aspects to this election. “It’s very unusual for the party to win the presidency and to lose House and Senate seats. That’s a rather strange phenomenon that has come out of this election.”  However, on the day of the election, Professor Geer assured the class that the results of the election, whatever they may be, should not be cause for panic.  The United States holds elections so frequently and power is distributed in such a way that a party needs to secure numerous consecutive victories to create permanent change.  Such caution is indicative of the intent of the class: to peel back the hyperreactive analysis that this and all presidential elections tend to be perceived through.  From there, we might uncover certain “underlying regularities” in our elections so that, as Professor Clinton put it, we can “help people understand what’s going on in this election and elections in the future.”