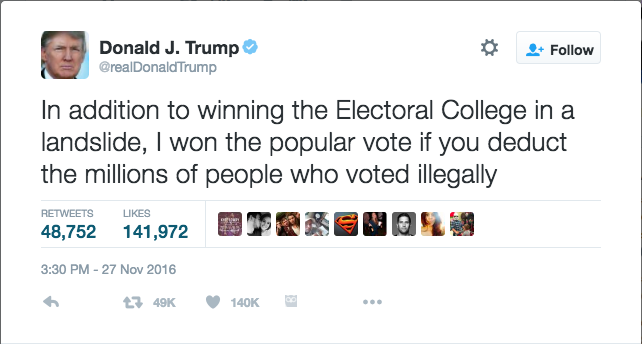 Many Americans have expressed dismay at the Electoral College as Hillary Clinton’s lead in the popular vote rises to almost two million. Movements have been started calling for an end to the institution. However, in light of Trump’s claim that “millions of people” illegally voted, some Trump supporters are calling instead for the abolition of the popular vote. “Millions of illegal immigrants committed voter fraud, so clearly the popular vote can’t be trusted,” stated one supporter.

Although the popular vote has no bearing on the result of the presidential election, many Trump supporters resent the fact that it is being cited to dampen Trump’s so-called mandate. “The crooked media is trying to take this win away from Trump. We’ve got to get rid of the mainstream media and the popular vote,” said one Trump voter. He, like many other voters, is skeptical that Clinton genuinely won the popular vote. “I didn’t see a single Hillary Clinton sign where I lived, and look how many people went to Trump’s rallies. It’s obvious that the popular vote was rigged. Since it can be rigged so easily, it’s really the most undemocratic institution of our democracy.”

Constitutional arguments have been made in favor of the Electoral College. “While the Electoral College is explicitly protected by the Constitution, the popular vote is simply a wild extrapolation used by loose constructionists, and it is a clear violation of states’ rights,” pontificated one conservative scholar. “The Founders would be devastated by the state of our democracy, and the degree of power citizens hold over the government. Hamilton especially distrusted mob rule, fearing that many uninformed people would vote based on emotion, causing a demagogue to be elected. The genius of the Electoral College is that it was intended to prevent this.”

“Ever since the 15th and 19th Amendments started allowing the popular vote to be rigged, it simply can’t be trusted. Ideally, those would be repealed, but with our corrupt, special interest-influenced government and overly PC society, that’s never going to happen. We’ve got to drain the swamp that is the popular vote,” explained another supporter. Some are also calling to abolish the 17th Amendment, which would allow Senators to be one again selected by state legislatures, which are disproportionately controlled by Republicans.