The Future of the Republican Party 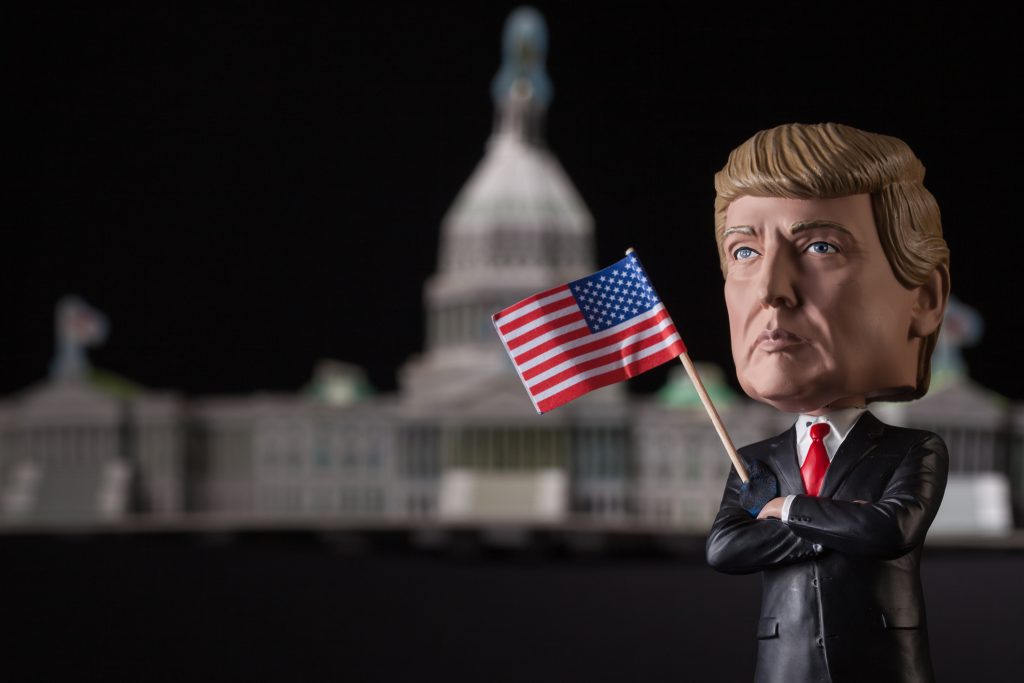 Lexington, KY, USA - November 8, 2016: Republican Donald Trump, as depicted by this lifelike bobblehead doll, won the 2016 American presidential election against Democratic candidate Hillary Clinton. This realistic figure became popular prior to the 2016 presidential election and is one of several dolls marketed by Royal Bobbles.

A week and a half removed from his inauguration, President Donald Trump has already taken decisive action to follow through on his campaign promises, both with and without aid from his Republican colleagues. He nominated a capable, conservative Supreme Court justice, and has majorities in both chambers of Congress.

So begins potentially one of the most formative Republican presidencies since that of Ronald Reagan.

President Trump has already issued a number of executive orders to push construction of oil pipelines, immigration reform, the United States’ prompt withdrawal from the Trans-Pacific Partnership (TPP), policy on climate change and abortion, and the “repeal and replace” approach to dismantling Obamacare. His cabinet and White House appointments boast a wide variety of private sector executives and “Washington outsiders,” indicating that Trump is indeed trying to “drain the swamp” in Washington, D.C. At the very least, he is attempting to put on the appearance of activity, as his executive orders are relatively low-effort.

Despite GOP control of all three branches of government, the party is struggling with an identity crisis under President Trump’s leadership. The executive actions Trump has taken in his first two weeks set an interesting precedent for the administration, as his activist approach to government seems to contradict the traditional conservative beliefs of his party and the majority of the members it comprises. His nationalist economic standards also seem contrary to the traditional Republican free-market economic philosophy. These inconsistencies were prominent throughout the campaign, and continue to plague the GOP as Trump’s presidency unfolds.

Many Republican higher-ups denounced Trump during his presidential run, and Trump pulled no punches in response. Even after his inauguration, he has not made things easy for his Republican peers in Congress. John McCain made these tensions manifest when responding to President Trump’s comments regarding torture.

Paul Ryan and the rest of the Republican party are in a compromising position, as they finally have the ability to pass the bills they want. However, the GOP majorities will only pay off if President Trump cooperates with congressional leadership—and signs their bills. Ryan has already supported Trump’s executive actions, but GOP leadership has yet to cement the party consensus necessary for success throughout Trump’s presidency. Although many in the GOP may abhor Donald Trump, intra-party allyship will be essential to maintaining majorities during the 2018 midterm elections.

There seems to be many conflicting selling points to Donald Trump’s policy platforms, an issue many politically conscious people bring up on a regular basis. Dr. Thomas Schwartz, presidential historian and professor at Vanderbilt, had this to say regarding the future of the Republican Party:

“My own sense is that Donald Trump may have a profound effect on the Republican Party, as profound as Ronald Reagan. But the key point is that he must be successful in order to have this effect. By success I would argue that he has to increase America’s relative economic growth rate to close to 4 percent, avoid messy and inconclusive wars, and keep from any embarrassing scandals. And then either he or another Republican must win in 2020.”

Schwartz believes that if Trump is successful in his goals, then he will have transformed the GOP into a nationalist and protectionist party, a party that might even shed some of its traditional conservative standards (outside of abortion). If he fails, the party will have to undergo an identity transformation in order to counteract the fickle nature of modern politics. If the Democratic Party successfully capitalizes on even the most minor mishaps of the Trump administration, the GOP will pay the electoral price for years to come.

Barring unexpected developments, Donald Trump has 1,460 days to shape the contemporary political sphere. He has the opportunity to mold the goals and trajectories of the disjointed Republican Party. If Mr. Trump and the Republican Party want to retain the presidency and its majority in the House and Senate while also “Making America Great Again,” their objectives should be threefold: establish continuity within the GOP, follow through on campaign promises, and obtain tangible results before the midterm elections of 2018. In the words of Dr. Schwartz, “Trump will put his stamp on the party, for good or for ill.”