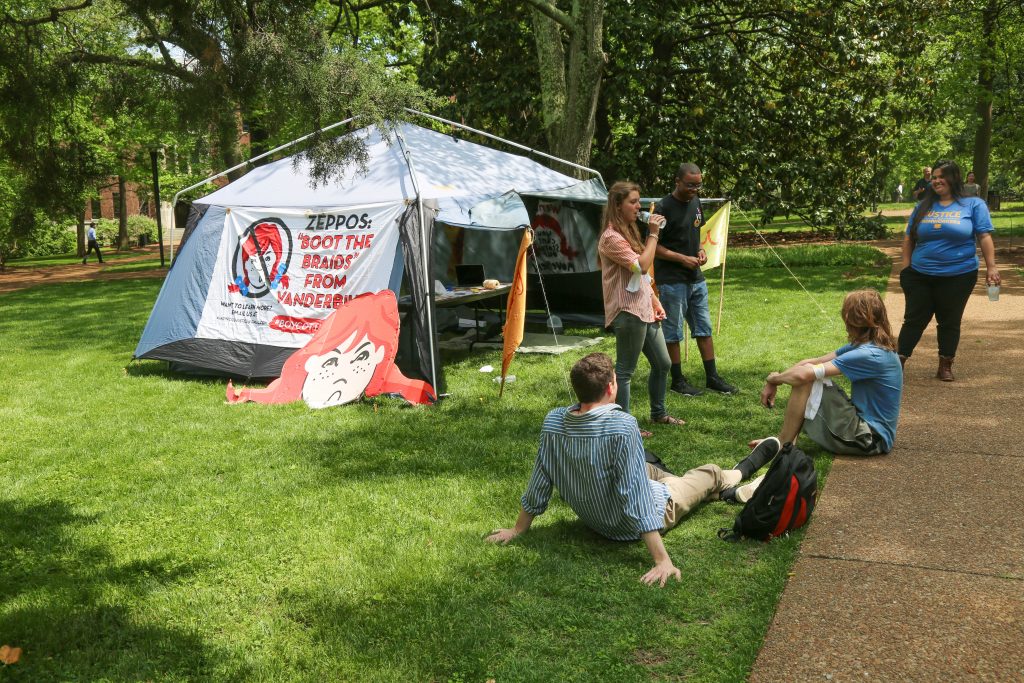 A group of Vanderbilt students are fasting this week as part of a nation-wide protest against fast food chain Wendy’s over alleged worker’s rights violations.

The students, totaling twelve in all, started fasting on April 18th and plan to continue fasting until April 25th. The fast will culminate in a student and community march on Chancellor Nicholas Zeppos’ office on the afternoon of the 25th.

The fasting and marching are only a small part of student efforts to fight the burger chain. Since March of last year, students have routinely pressured the university’s administration to remove Wendy’s from the Taste of Nashville program, which allows students to use meal plan dollars to buy food from local restaurants.

The Wendy’s boycott was originally launched last year by farmworker rights organization Coalition of Immokalee Workers (CIW) after Wendy’s declined to participate in the Fair Food Program, CIW’s supply chain certification system. The program, which boasts partnerships with most other major fast food brands like Burger King, McDonald’s, and Yum! Brands, has the goal of bringing together farmers and food retailers to guarantee fair wages and working conditions for farmworkers.

Several human rights groups and other organizations have celebrated the Fair Food Program since its launch in 2001. The New York Times has called the program “the best workplace monitoring program” in the country, and the United Nations Working Group on Business and Human Rights hailed it as “a ground-breaking accountability arrangement.”

Still, Wendy’s decided to stay out of the program largely for cost reasons. In a blog post by Wendy’s chief communications officer Liliana Esposito, the deal breaker was the requirement that all Fair Food Program participants pay an additional fee on top of product costs that gets distributed directly to the suppliers’ employees.

“We don’t believe we should pay another company’s employees,” said Esposito, “just as we do not pay factory workers, truck drivers or maintenance personnel that work for our other suppliers.”

In addition to declining participation in the program, Wendy’s shifted its tomato suppliers from Florida to Mexico, where farms have more than once come under scrutiny for human rights violations including wage theft, sexual harassment, and slavery.

Wendy’s responded to CIW’s and other’s criticisms last month by revamping and expanding its Supplier Code of Conduct. The agreement now lays out in detail the company’s expectations for suppliers’ commitments to food safety, animal welfare, and human and labor rights.

CIW, however, criticized the move as “hollow” and “[containing” no effective mechanisms for worker participation or enforcement.” A statement on their website reads, “Wendy’s new code represents the very worst of the traditional corporate approach to social responsibility driven by public relations rather than human rights.”

The protestors at Vanderbilt are hoping that their fast finally gets the attention of the university. “Chancellor Zeppos has an important ethical choice to make concerning Vanderbilt’s contract with Wendy’s,” said Ania Szczesniewski, a third-year student and one of the fast participants.

“We’re going without food for seven days to send the message that it is unacceptable for the university to keep doing business with a corporation that willingly chooses to support violence, sexual harassment, wage theft, and dangerous working conditions in their supply chain.”

The Vanderbilt fasters are joined by students from other universities around the country as part of the “Boot the Braids” campaign to end university contracts with Wendy’s. Students at Ohio State University partook in their own fast last month, and since then a litany of colleges have glommed onto the movement. The list includes the University of Michigan, New College of Florida, Valencia College, University of South Florida, University of Tampa, and Eckerd College.

The protestors are expecting several more schools to join through the month of May.