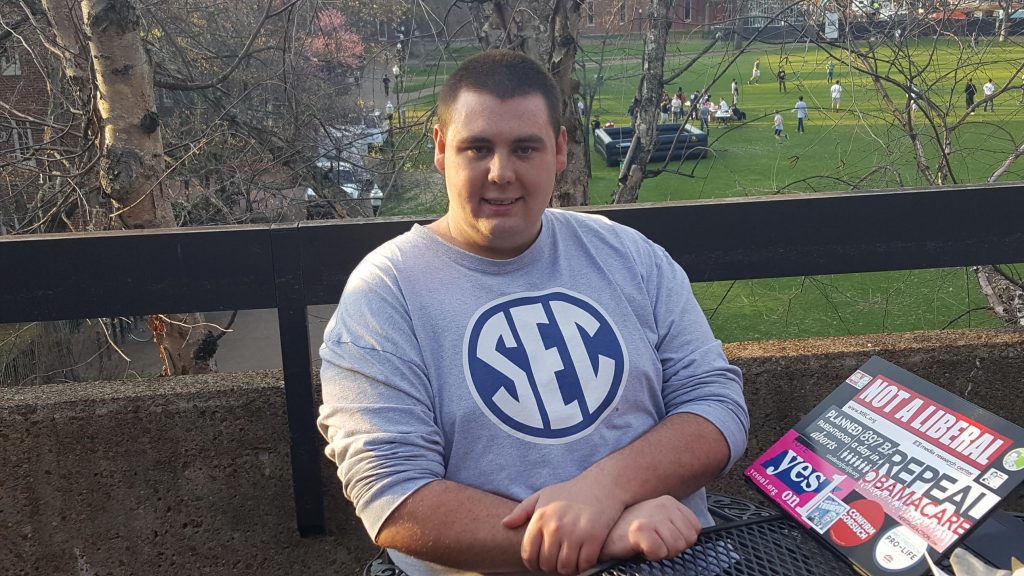 Disclaimer:  Matt Colleran’s opinions are his own and he does not speak on behalf of any organizations he is a part of.

Those who follow the dramatic happenings of Dank New Rand Memes will recognize Matt Colleran, who was recently thrown out of the group. The incident occurred on the night of April 15th, with the posting of a social justice-oriented meme which, among other things, described capitalism as “the enemy of human rights.” In the comments section, Colleran inquired, “Who approves this SJW [social justice warrior] stupidity, anyway?”

An administrator of the meme page responded, “U can be quiet now white boy,” to which Matt replied, “Being a white male doesn’t make my opinion any less valid.” To this end, he unleashed a flurry of assertions: “Everyone is equal in this society, so we need to just stop talking about race and sex … there is no such thing as transgender, by the way … Socialism always fails, pure capitalism works perfectly … Your party murders 3000 babies a day, so I have the moral high ground.” This attracted the ire of many students, and the argument dramatically escalated. It culminated when, within the span of a minute, Matt conceded to one student that he has “a tendency to get too worked up” about what he believes in, and then immediately asserted, “Hook up culture is immoral.” His contribution to the discussion ended there, as he was temporarily kicked out of the group.

Matt Colleran is very politically outspoken, which anyone who took U.S. Elections last semester can attest to. He explained, “I think it’s honestly my duty to fight for what I believe in because there are a lot of people here who feel that they shouldn’t speak up. I don’t think this campus is as liberal as people think it is. I think there are a lot of conservatives on this campus, maybe even the majority. I definitely thought it was the majority my freshman year, but a lot has changed in two years. Things have definitely gone downhill a little. A lot of conservatives are afraid to speak their mind and are afraid of what the left will say.”

In addition, he has immersed himself in conservative causes on campus. He is the former Treasurer and current Executive Board member of Vanderbilt College Republicans, founder of the Vanderbilt Chapter of Young Americans for Freedom, and host of The Conservative VU on Vandy Radio.  In addition, last year he was the chair of Vanderbilt Students for Life. Moreover, in 2014 he campaigned for YesOn1, a ballot provision which amended the Tennessee Constitution to no longer recognize the right to an abortion.

Matt’s pro-life stance sparked his interest in politics. While watching a 2008 primary debate, his grandfather began explaining political issues to Matt to see whether he was a Democrat or a Republican.  When asked what he thought of abortion, Matt had no idea what his grandfather was referring to. His grandfather explained what abortion was, and Matt decided, “That’s murdering babies.  That’s not okay.  It shouldn’t be allowed.” That summer, he realized that “Republicans and McCain were against abortion and Democrats and Obama were for abortion.” He’s been a Republican ever since, as well as a fierce pro-life activist. When asked if he would be willing to give up on abortion if it would guarantee victories on all other conservative fronts, he bluntly stated, “No, I wouldn’t make any deal that would say abortion should be ok or is allowed. I would always fight for the unborn, for the right to life.”

Yet he maintains that he is not a single-issue voter. He certainly has plenty to say about other issues. He explained to me that our current healthcare market needs to become more like a free market in order to drive down costs, that he supports securing the southern border and ending sanctuary cities, and that he strongly believes freedom of association grants businesses the right to refuse service to anyone they choose.

He also dismissed the feasibility of being “fiscally conservative, socially liberal.”  In his opinion, such a dichotomy is flawed because fiscal conservatism does not work without social conservatism. He pointed out how the poverty rate in America has remained the same since President Johnson began the War on Poverty in the 1960s, arguing, “ if it had not been for a decline in family values, poverty [in America] would be extinct today.  I really believe that.”  He cited statistics showing that, controlling for other factors, kids raised by both biological parents will have the best economic outcomes in adulthood.  “I think we need to support these strong family values,” he asserted, “because I not only consider it to be right morally, but I also think that it’s right for our economy.  I think there’s a real role for the government to take an active stand in promoting family values.”

In short, Matt is a staunch traditional conservative.  He has attended CPAC (Conservative Political Action Conference) for the past three years, and his phone has a picture of Ronald Reagan on the back.  In fact, his laptop is covered with stickers demonstrating that he is pro-life, is “NOT A LIBERAL,” and has publicly supported Scott Walker, Marco Rubio, Ted Cruz, and, finally, President Trump.

During the election last year, he exhibited a support for Donald Trump that was simultaneously reluctant and steadfast. When Trump’s nomination became inevitable after his victory in Indiana, Matt proclaimed on Facebook, “Tonight is a dark, dark night for the conservative movement. Ronald Reagan’s spirit died tonight!” Yet he also endorsed Trump less than a month later in order to place a conservative on the Supreme Court. To him, a conservative court is crucial because his ultimate political goal is to see Roe V. Wade overturned.

I asked him if there was any issue on which he agreed with liberals. He gave it some thought, then remarked with a laugh, “I’d like to think of something, because I don’t want to sound like I think that liberals are awful people or anything. But I’m honestly hard pressed to find an issue of major contention where I agree with liberals.  Some liberals support the first amendment, so there are types of liberals I would agree with on some things. I respect Senator Manchin … he’s a Democratic senator from West Virginia … but then that’s because he stands for a lot of conservative principles.”

Despite this, Matt believes that conservatives on campus have a lot to learn from the left. “I think the left does a really good job of mobilizing themselves,” he said. “I think they do a really good job of staying united with themselves. It doesn’t matter what liberal organization—if it’s the college Dems or the feminists or a refugee organization—the left is completely in lock-step on every issue. The right needs to take a page from their book.  You don’t see a refugee person talk about how the feminists are wrong on abortion.”

“Likewise, we can’t have Republicans speaking out in favor of abortion or speaking out against cutting taxes. We need to be united and we need to be mobilized.  We see at these VSG meetings—I went to one during the Sanctuary Campus debate—there were probably fifty social justice warriors there because they’re just so well mobilized and they go to everything.  Some conservatives think it’s not conservative to protest on our side. I completely disagree. We’re not going to get what we want unless we’re active and seek what we want and are mobilized and go to everything and make sure our voices are always heard. So I actually have a lot of frustration with the campus right because of that.”

This combative approach extends to his views on national politics. I asked him what he meant when he said that Republicans shouldn’t speak out against the party line. He responded, “I think that conservatives getting what they want and liberals getting what they want is largely a zero-sum game. I don’t think it’s possible for both to really get what they want, and we know that the left is going to be completely unified in everything that they do. And, for us to fight back, we need to be just as unified or else the left, when they have power—fortunately we have power now but that won’t last forever—we can’t allow liberals to get more of what they want done than we get of what we want done because we’re facing division from within.”

“Let’s just put it this way: there are issues that we all care about more than others. I’ll give you an issue that I personally don’t care about as much: I personally don’t care about the immigration issue as much.  … But I’ll fight with my party on the immigration issue, I’ll fight with my side, because I would want the same from someone who cares less about the abortion issue to fight with me on the abortion issue.  I think we need to be in an alliance, all the conservative movement groups need to be in a practical alliance with each other. Because when our party wins, when our movement wins, we should all win.  Whatever issue we each care about should move in the right direction.”

That’s Matt Colleran:  an outspoken conservative, eager and determined to express his worldview so that conservatism comes out on top. Moreover, the end of his college days is likely not going to be the end of such determination. “I would like to maybe run for office one day,” he remarked at the conclusion of our interview. “I think that would be a good way to promote the values that I believe in so strongly. But I think, to be able to do that, I think it’s better to have experience in the private sector.  We have to remember that the government isn’t what drives most of the country.  That should be the private sector. That represents the real Americans. Not the Washington insiders.”